The San Francisco Art Institute has closed after the proposed union with the University of San Francisco fell through at the altar. Had lunch with my art conservator friends, who luckily managed to get Diego Rivera’s fresco conserved before the doors closed. The mural with the dimension bending trompe l’oeil faux scaffolding becomes even deeper with the lifts and tables in this image. As we await a resolution to having the mural publicly accessible, there is some consolation in knowing that the mural has been lovingly attended and is in fine condition. Visited with the SFAI librarians/archivists, who curate the very important library with records dating to the early art scene in San Francisco. Hopefully, some way of getting them back to their important work will be found soon. SFAI Librarian/archivist Jeff Gunderson mentioned a possible solution, when he visited SFMOMA recently. SFAI archivist Becky Alexander has just written an article for Acid Free magazine (Los Angeles Archivists Collective), “The Cosmos Loved Us: Julia Bergman, Will Maynez and the Diego Rivera Collection.”

SFMOMA’s Diego Rivera’s America exhibition has opened to great attendance and increased foot traffic for the mural. The documentary Diego Rivera: Moving A Masterpiece is looping in the second-floor coffee shop, which overlooks the mural. Though, I’ve seen the new show multiple times, my favorite was an early sneak peek with SFMOMA guest curator James Oles, SFMOMA’s curator Maria Castro, and Beverly Adams, New York MoMA’s head curator of Latin American art. Their commentary was very illuminating, and I have taken advantage of the information in giving tours to friends and family. A favorite piece is Desnudo con Alcatraces featuring the late Nieves Orozco. In a 2006 interview at the mural, she told me that she posed with her back to the audience because she was pregnant. The exhibition features some earlier pieces Rivera re-purposed to fill up the acres of Pan American Unity. (The Community Living Campaign hosted a Zoom where we spoke about some of these images and other aspects of Diego Rivera’s America.) Some examples of re-purposed images are the man with jack hammer, references to the Ford Motor assembly line, women with backstrap looms, and the gas suited figure with his foot ensnared in a “bear trap.” Especially significant was the swastika tattooed arm with dagger being restrained by a muscular arm. In the exhibit work, the Nazis were being restrained by the Russians in 1933-34. But in 1940 with Stalin and Hitler on the same side, it was the isolationist US which Rivera felt had to restrain the Nazis. This was one year before the US entered the war.

There is an irony in a Mexican communist finding that his natural ally was the United States. But Rivera was pragmatic and would not be restrained by some pointless orthodoxy. In June 1941 (Six months after the mural was finished), Germany invaded the Soviet Union as Rivera had predicted, and formerly isolationist US communists were now clamoring for the US to save Mother Russia.  Stalin was now the Allies’ “Uncle Joe.” When Hitler declared war on us on December 11, 1941, the “America Firster’s” isolationist stance evaporated, but left a smell. [See Dr. Seuss’ October 1, 1941, cartoon below and more of his currently topical cartoons]. Overcoming the combined industrial might of the US and the USSR was unlikely. Within 6 months, Hitler’s overreach had ensured that Germany would eventually lose the war. 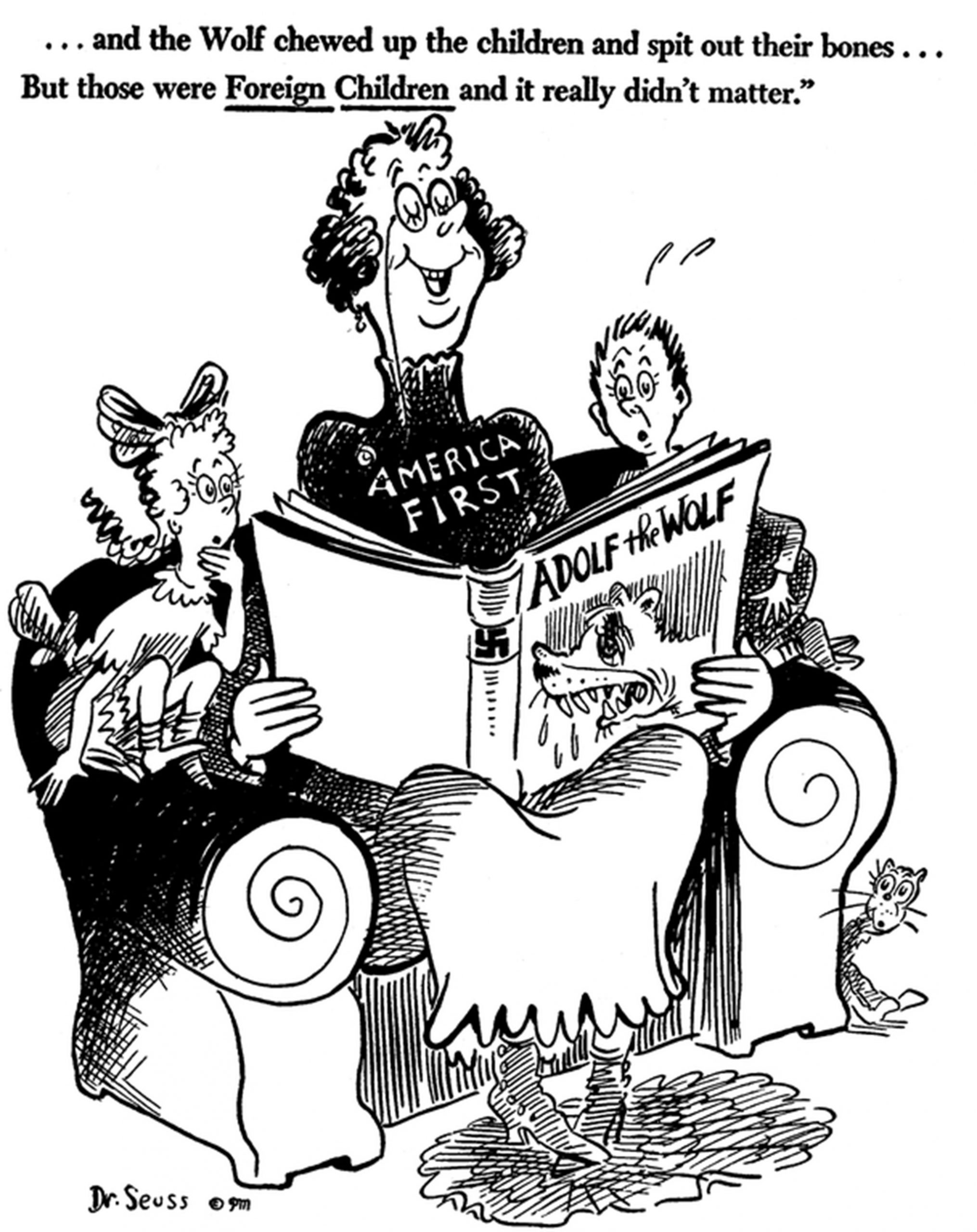 The SFMOMA art conservators invited me into their studios a couple of times to see Rivera’s “Stern fresco” (Still Life and Blossoming Almond Tree) as it was being conserved before it was installed in the show. It was created for Rosalie Stern (widow of Sigmund Stern) at her Atherton (SF peninsula) home but eventually moved to Stern Hall at UC Berkeley. 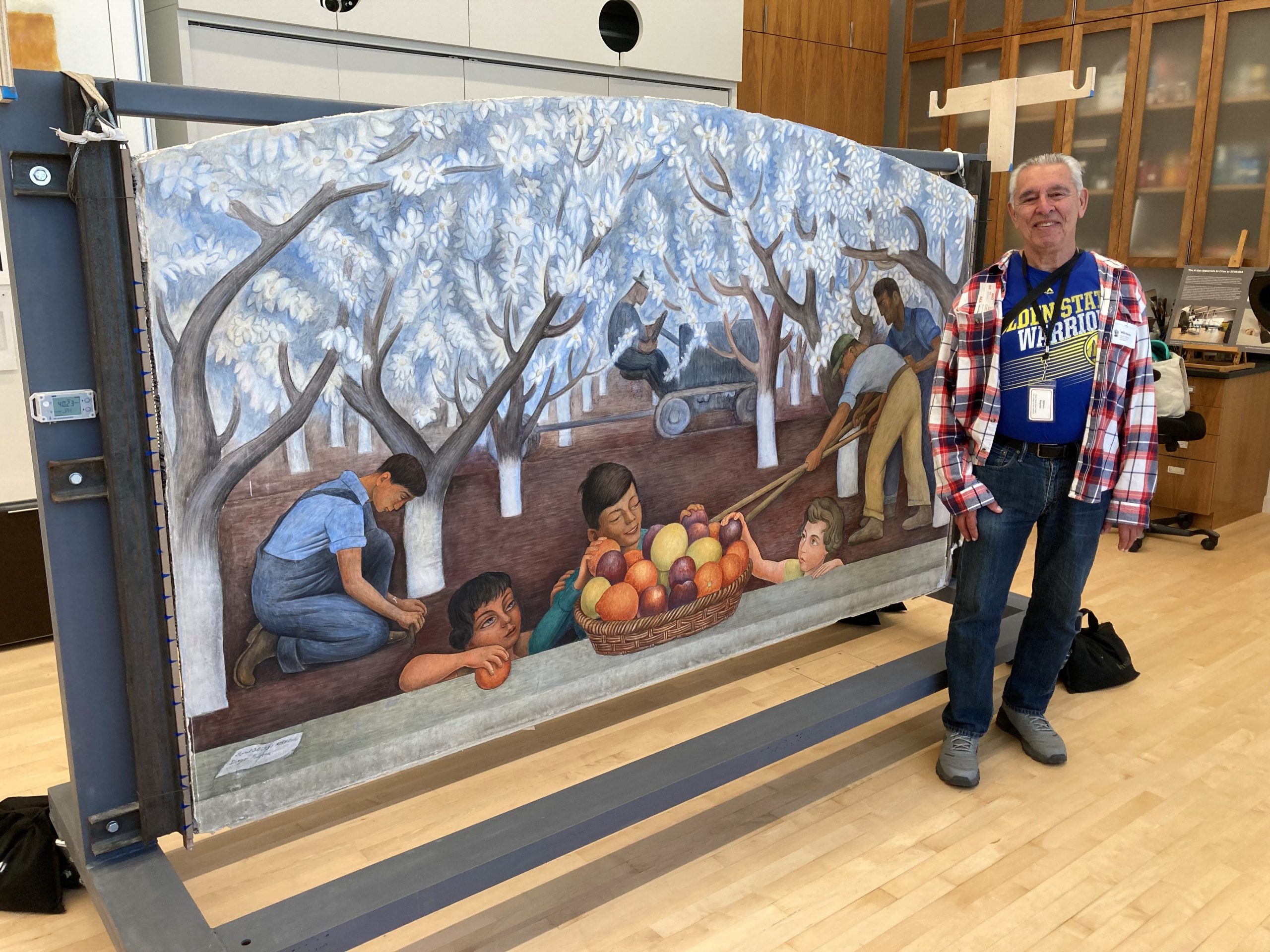 On the left side the image of Walter Haas, Jr. kneeling had a different look. Remembering an Elise Haas oral history, we were able to confirm that Walter only wanted into the mural belatedly and had to be added. One of a series of Ansel Adams photos (included in the exhibit), showed Walter being painted last. To me it seems, Rivera had used a slightly brighter palette and put Walter in a sharper focus than the children in the foreground [left to right, “Dega” (Rhoda’s imaginary friend), Peter E. Haas, and Rhoda Haas.] Elise, daughter of Levi-Strauss owner Rosalie Stern, was the children’s mother. A favorite essay about this mural is Alegoría Californiana by UC Berkeley emeritus Spanish/Portuguese professor Julio Ramos.

Oral interviews are so important, and we note the passing of Mary McChesney, whose interviews with WPA era artists are such an essential resource. Leaving a record for those that follow is the counterpoint to honoring los antepasados. We become the ancestors. Her personal oral interview resides here.

Had a delightful visit with Lucienne and David Allen up in Mendocino. Her grandparents were Rivera’s assistants Lucienne Bloch and Stephen Pope Dimitroff. In 1993 they executed this Diego Rivera Theatre sign in fresco, and here are videos demonstrating the technique they learned from Diego. Here is a 1964 interview with Lucienne Bloch conducted by Mary McChesney. 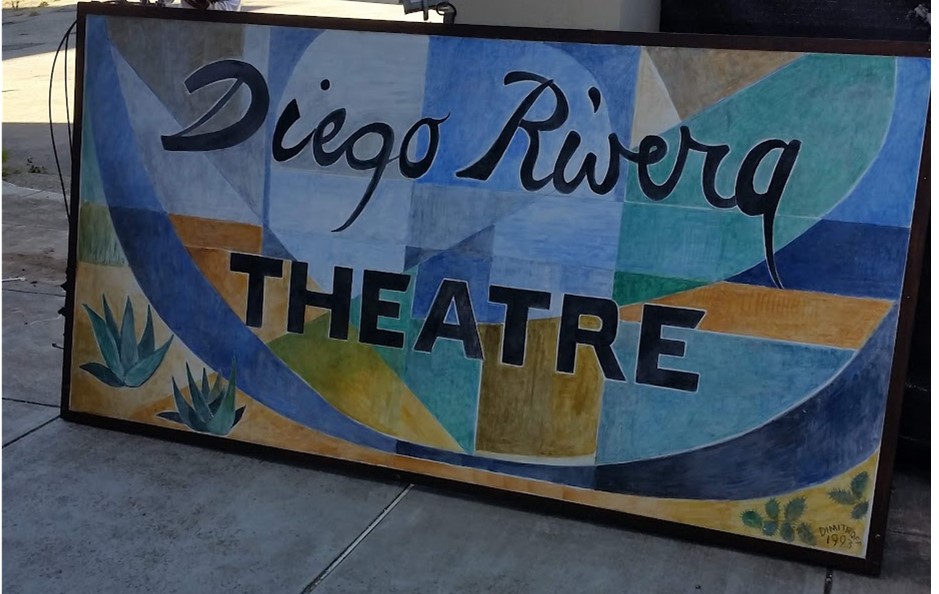 SFMOMA has booked Jean Franco and me to perform our one-act play “An Interview with Frida” on Diego’s birthday, Thursday December 8 at 6 pm in the Roberts Family Gallery. Like the mural, the play is free to the public.

The Emmy Lou Packard: Artist of Conscience exhibition opening was very well attended. The comprehensive show displayed the many hats Emmy Lou wore as a social activist, mentor, and artist. It was a pleasant surprise to see that Roberto Martinez, one of the team that moved the mural to SFMOMA, is now the Richmond Art Center’s Exhibitions Director. Though the show has closed, here is an article which appeared in Mission Local.

Some mural visitors: neighbors of Emmy Lou Packard’s family home in Berkeley, where Diego hid after Trotsky’s assassination; Timothy Pflueger’s great nephew and his daughter; students from SFAI and a Marin school, who were doing murals at SFMOMA based on the themes in Pan American Unity; and a parade of visitors from all over the world. An associate of the San Diego Opera, which is currently staging El último sueño de Frida y Diego, suggested that I should meet the director. This work is co-produced by the San Francisco Opera, which will stage it next June, while the mural is still at SFMOMA. Our mural is finally getting the exposure it has always deserved. It is a living, breathing work of art and many intoxicated viewers are making repeat visits.

Have had an interesting correspondence with Abby Sher, producer/director of a 1982 documentary on Canadian sculptor Dudley Carter, who is featured three times in the mural. (She is looking for a venue to screen her work.) City College owns three pieces by Carter: Big Horn Mountain Ram, The Goddess of the Forest, and The Beast. (Recently, a member of a family, who knew Dudley Carter and have one of his totems on their property, visited). Like Frida in our mural, Carter spoke to American art. When Dudley told Frida that he was honored to be in the mural by her, she replied that no, the honor was hers to be near him.

Here in the Fine Arts Building, there is a man carving wood. This man was an engineer, an educated and sophisticated man. He lived with the Indians and then he became an artist, and his art for [sic] was like Indian art—only not the same, but a great deal of Indian feeling had passed into him and it came out in his art. Now, what he carves is not Indian any more, but his own expression—and his own expression now has in it what he has felt, what he has learned from the Indians. That is right, that is the way art should be. First the assimilation and then the expression. Only why do the artists of this continent think that they should always assimilate the art of Europe? They should go to the other Americans for their enrichment, because if they copy Europe it will always be something they cannot feel because after all they are not Europeans.

Ran across an interesting article on Pedro Diego Alvarado, Diego’s grandson by his architect daughter Ruth. Diego would have loved that the article appears in Garden & Gun magazine. The Mexican artist loved his gardens and while painting Pan American Unity was armed with a .45 and a .38 after Trotsky was assassinated in Mexico City. “Art in Action” could have become a Quentin Tarantino production. On the scaffolding while painting with his back to the audience, Diego offered a generous target. Another grandson by Ruth, scholar Juan Rafael Coronel Rivera, told me about some of the identities for the Mexican figures on the left side of the mural.

Artist Ben Wood has his next opus of projected installations at the site of the old San Francisco Cliff House until September 25.

The Victor Arnautoff murals at Washington High School will remain uncovered as the current board has rescinded the original vote to cover or paint them over. Hopefully, this will put to rest other attempts to deface WPA era murals. Work to create expository signage is ongoing. It was a hard road to get to the obvious resolution.

Isamu Noguchi’s home is to be opened to the public. Noguchi enters our story as part of the crew that created the art at the Mercado Abelardo Rodriguez in Mexico City, a project under the nominal direction of Diego. Noguchi is part of the entangled web of lovers that populate our story. He had an eight-month fling with Frida and was also a partner to artist Marion Greenwood with whom Diego was romantically engaged in 1936. Notably, Isamu had been partnered with Dorothy Hale, whom Frida portrayed in a scandalous recuerdo for Clare Booth in 1939 after Dorothy committed suicide. It was Noguchi whom a mortified Luce approached to get her name removed from Frida’s inscription, leaving a long blank space.

As Frida gets exposed in various “immersive” experiences and other exhibitions, here is an opinion piece.

Here is an interview in Spanish (at 44:25) with our friend, artist Arturo Guevara, who though he resides in the US, travels extensively in Mexico and was born in Guanajuato, Diego Rivera’s birthplace.