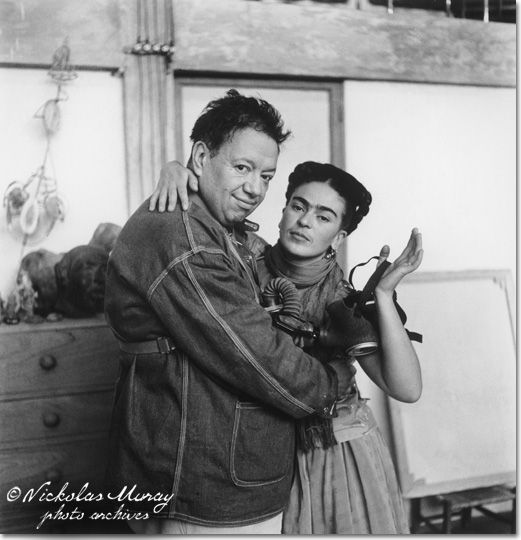 Frida with Diego and Gas Mask by Nick Muray, 1938

The Covid-19 tsunami has left us few places to flee; there appears to be little high ground.  My heart especially goes out to those with loved ones quarantined in nursing homes and to those residents deprived of life-affirming visits. Everyday new consequences surface, inevitable, but distressing none-the-less. SFMOMA’s Diego Rivera’s America exhibition has been postponed until Summer-Fall 2022.

Gratefully, planning continues on moving the mural; its museum unveiling tentatively set for late February 2021. From México UNAM’s Graduate Mechanical Engineering Department streamed video of the analytical testing of replica mural panels. As the panels tilted and swayed in the air, Art and Science danced a mesmerizing tango. The empirical data is informing the local team’s strategy to safely de-install and transport the mural panels.

Work continues on the design of a new Diego Rivera Theater and its lobby, where the mural will be installed in 2023. A dialogue has also started on defining a Mural Director position. Decades of work on this project have instilled the need of continuity for a mural which will last centuries.

80 years ago in early September, a distraught Frida flew to San Francisco. Her confidant Dr. Leo Eloesser checked her into St. Luke’s Hospital on Valencia Street. After Trotsky’s assassination on August 20-21st the police had arrested Frida and her sister Cristina. They had unwittingly had the assassin over for lunch at the Casa Azul, where Trotsky had once lived. The police decided that Frida wasn’t even a Mexican. She was divorced from Diego and her father was German. Diego was alarmed that Frida, who passed herself off as a Jew, might revert to being a German national. She was hastily naturalized a Mexican on August 26, 1940.

Chronicling the mural is immensely facilitated by our wealth of primary source material. Years ago, my late research partner, librarian Julia Bergman, went to Philadelphia to photocopy much of Emmy Lou Packard’s research work for a never written book on Diego Rivera in San Francisco. Emmy Lou interviewed people, collected correspondence, and made notes of her interactions with Diego, both as an assistant on Pan American Unity and as his secretary. Donald and Kathé Cairns generously gave Julia access to his mother’s work. Donald has a special role as the little boy featured in the center of the mural next to a Mexican girl. (Originals at AAA and UCB Bancroft Library.)

Julia then encouraged architect John Pflueger to allow us to access his uncle architect Timothy Pflueger’s papers about the creation of Pan American Unity. (Originals at UCB Bancroft Library.) Through serendipity (Julia’s and my “hole card”), we found the papers of a Rivera assistant, Mona Hofmann, who left revealing anecdotes about the making of the mural. Coupled with the private Gershwin information we acquired and the not-yet-public, raw notes for Diego’s autobiography, My Art, My Life, a librarian’s treasure trove informs our stories. As others cull through these histories in the future, new insights will arise and investigators will marvel at Julia.

Now, Lucienne Allen has generously sent digital copies of her grandmother Lucienne Bloch’s 1931-33 journals. (The early 1930’s mysteriously became a meta-theme in this missive.) These journals have recently been referenced by Celia Stahr in her Frida in America book. Lucienne met Diego and Frida late in 1931 at a NYC dinner hosted by San Francisco’s Rosalie Stern, owner of Levi Strauss & Company. Lucienne had been seated next to Diego so that they could converse in French. Diego didn’t speak English.  Though Lucienne at the time had an offer to work with Frank Lloyd Wright in Wisconsin, she opted to serve as an assistant on Diego’s portable frescos for his 1931 one-man MoMA show, the 1932-33 Detroit murals, the 1933 Rockefeller Center mural, and the New Workers School murals. Lucienne became a dear friend to Frida and accompanied her back to México when Frida’s mother was dying. She was an eyewitness to some of what transpired in Diego and Frida’s encounter with the US. Her point of view allows us to triangulate on incidents reported separately by Diego and Frida, while shedding light on their personalities. Another Rivera assistant Stephen Dimitroff became her partner and husband. The two were well-known for their encyclopedic knowledge of fresco techniques. The San Francisco Art Institute (SFAI) Anne Bremer Library has DVD’s of lectures they gave there. Looking forward to the books Lucienne has planned.

After finishing his Allegory of California at the Pacific Stock Exchange Tower, Diego and Frida had spent six weeks in spring 1931 at Rosalie Stern’s Atherton home on the San Francisco peninsula.  While there Diego painted a small, portable fresco, Still Life with Blossoming Almond Trees, which now resides at UC Berkeley’s Stern Hall, but will be part of SFMOMA’s show. (The previous embedded link is a brilliant essay by Prof. Julio Ramos about that fresco and the Spanish language.) Among other themes, the fresco was Rivera’s homage to Van Gogh’s Blossoming Almond Trees. This painting is cited in a New York Times piece on the Japanese printmaker Katsushika Hokusai, creator of Thirty-Six Views of Mt. Fuji. (Recently, a discovery has been made about a plausible locale of Van Gogh’s last painting of twisted Tree Roots. It reminded me of being in Paris trying to reconcile Diego’s view of Notre Dame from the Port de la Tournelle with the actual landscape.)

Lastly, in May 1931 Diego painted The Making of A Fresco, Showing the Building of a City. As the future of the SFAI is in flux, there is hope to find resources to keep the mural there. The Mexican Museum has asked to interview me about this mural. (If you’re downtown by Yerba Buena, look at the new facade on the Mexican Museum.) Art conservators continue restoring the  “Lost Frescoes,” such as one by Suzanne Scheuer, a student in 1934. SFAI Librarian and Archivist Jeff Gunderson sent a missive; re-posted here with permission. This Bulletin came out seven months before Diego and Frida first came to San Francisco. (Late in 1931 Rivera had a one-man show at MoMA, second only to Matisse, whose exhibit closed 17 days before.) 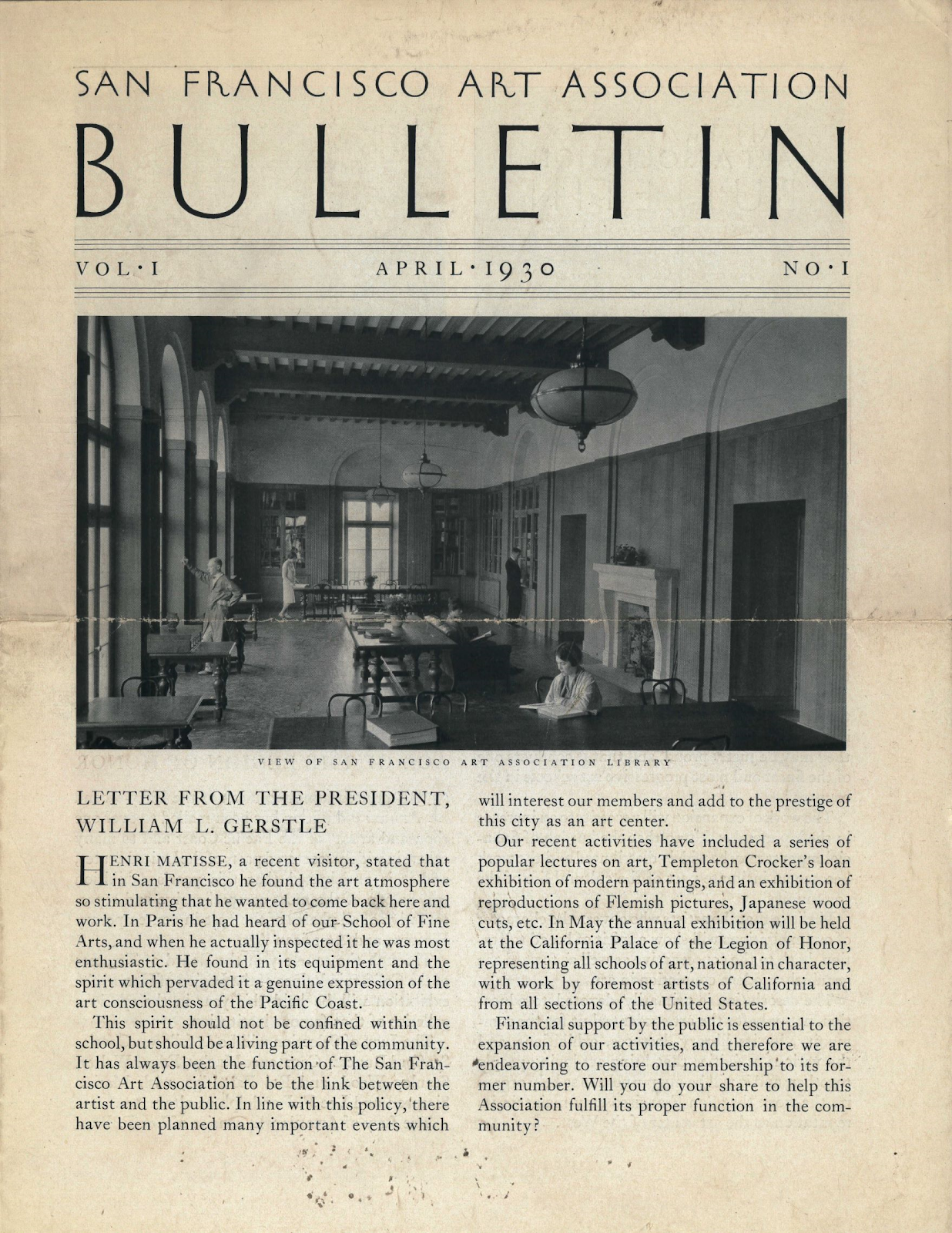 The first issue of the San Francisco Art Association Bulletin, April 1930, featured a stunning photograph of the new Library with its views of the bay, its oak tables, fireplace and filled with books in the built-in shelves. The letter from SFAA Board President, William Gerstle made sure to mention the recent visit by Henri Matisse who “expressed himself as having spent one of the most pleasant days of his stay in America when he visited the classes at work.” Matisse said “he had never seen such magnificent lighting and working conditions in Europe.”  [Jeff Gunderson]

Charlie Chaplin was almost assassinated in Japan on May 15, 1932 by ultranationalists, who mistakenly thought he was an American. He was saved because he decided at the last minute to go see some Sumo wrestling, instead of attending a reception. Again, this is how history happens. Almost immediately upon returning to the US in June 1932, Chaplin met Paulette Goddard. The couple went to the Far East in 1936 and got married, making her unavailable to George Gershwin, when he fell for her just before he died. (BTW An old school friend just sent me an announcement for Hershey Felder appearing in Gershwin Alone in Florence, Italy. The live streaming event happens Sunday September 13, 2020 at 5 PM PDT. Tickets.)

The New York Times chimed in on the significance of the UCSF Zakheim murals with an article on Biddy Mason, a Black nurse featured in one of the murals. The LA Times, too, had an opinion about her. Locally, KGO’s John Rothman show had a “Save the Murals!” segment on August 28, 2020. Recently, the SF Board of Supervisors and the SF Historic & Preservation Commission voted unanimously to grant the murals “Landmark Status.” UCSF is entertaining bids up to $1.8M to curate, remove, and store the murals. Hopefully, there will be a resolution to saving these historic legacies.

The San Francisco Public Library has booked me to do an on-line presentation on Saturday Sept. 12, 2020 at 11 am. Here is the link for the free Reservation.

The Mexican Consulate in San Francisco graciously invited me to participate in a bi-national Zoom ceremony this past July 31 to rename the Consulate’s Gallery to honor Diego and Frida.

Here are some inspiring items on artist Luchita Hurtado and photographers Flor Garduño and Dorothea Lange.

Cultural Heritage Imaging finished their NEH CARES grant mural work with another example of the professionalism being brought to this project. Though CHI had a discrete amount of shooting to do under the grant, they were amazed at how much brighter the colors were due to last summer’s conservation work. So, CHI re-shot our entire mural!

Kudos to my buddies Kiernan Graves and Anne Rosenthal, the lead fresco conservators, and to the whole international conservation crew.

As a going away quarantine fantasy, here is the San Francisco Ballet’s Dance of Dreams.

(Set to music from Alfred Hitchcock’s Vertigo, the opening dance sequence is at the SFAI).