As a parallel to Panel 1, Rivera celebrates the technological genius of the North here in Panel 5.

Rivera wrote, “Just as the plastic tradition of the South penetrated into the North, the creative mechanical power of the North enriched life in the South. I depicted the greatness of the North in such engineering achievements as Shasta Dam, oil derricks, bridges set near the American peaks of Mount Shasta and Mount Lassen, and in portraits of such geniuses as Ford, Morse, and Fulton, the last two of whom were artists as well as inventors.” 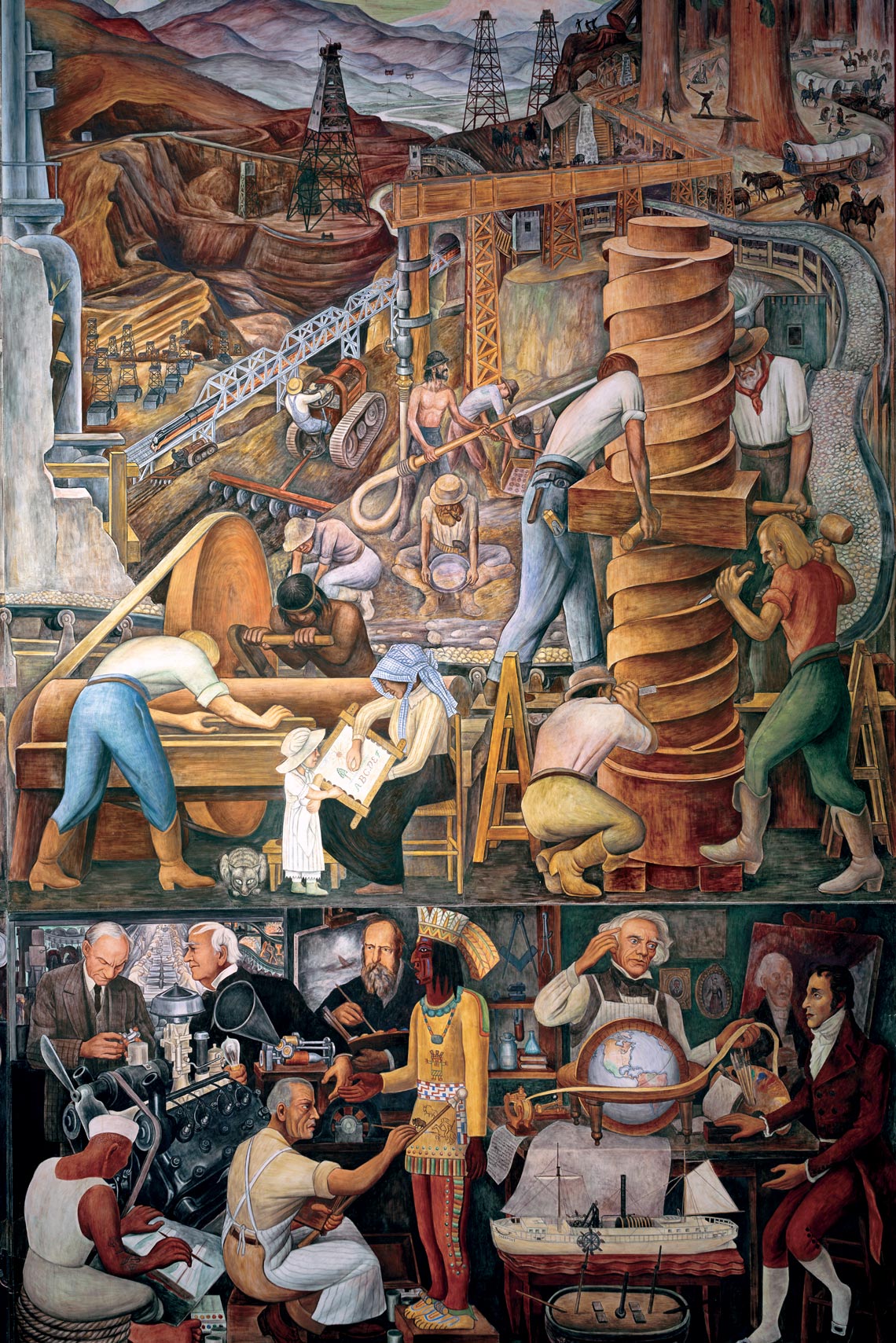 Mounts Lassen and Shasta, northern California volcanoes of the Cascade Range. Depicted below is the building of Shasta Dam with its head and tail towers. Symbolizing the pioneering industrial efforts going on in the western United States are modern agriculture, a train, gold mining and pylons carrying electricity.

Henry Ford, 1863-1947, inventor and industrialist, shown holding a Model A & B Ford V-8 fuel pump. He is standing in front of an automobile assembly line, a scene similar to those in Rivera’s Detroit murals commissioned by Edsel Ford.

Thomas A. Edison, 1847-1931, shown with his inventions the light bulb and phonograph. Henry Ford’s mentor, he also played an important role in the motion picture industry, producing both movies and motion picture equipment. Rivera said in a 1940 interview with Alfred Frankenstein: “The motion picture is the ultimate development of mural painting, and is the most important original contribution to art made by North American culture.”

Albert Pinkham Ryder, 1847-1917, American artist, is shown with a painting of a seascape in his typical style. Rivera regarded him as a true American original in that he sought inspiration in his native New England.

Samuel Finley Breese Morse, 1791-1872, artist and inventor of the telegraph and Morse code, shown holding telegraph tape and next to an easel with a portrait in his typical style.

Robert Fulton, 1765-1815, painter, engineer, and inventor who engineered the first successful steamboat; he is shown with models of the ‘Clermont’ and ‘Demologos’.