Helen Crlenklovich balances the right side of the mural, as her dive flows above Treasure Island, the setting of the Golden Gate International Exposition (GGIE).

Rivera wrote, “The creative force of the United States and the emancipation of women were symbolized by a woman artist, a woman architect, and a sculptress.

In the lower part of this panel, I represented two scenes from that typical art form of the North, the movies. One was from Charlie Chaplin’s film “The Great Dictator” (with Rivera adding a tragicomic grouping of Hitler, Mussolini, and Stalin); the other from the Edward G. Robinson film “Confessions of a Nazi Spy”. Both works dramatized the fight between the democracies and the totalitarian powers. A hand rose up out of a machine as if to ward off the forces of aggression, symbolizing the American conscience reacting to the threat against freedom, in the love of which the history of Mexico and the United States were united.”

Rivera was an avid movie fan. He saw movies as a type of “moving mural”, an art form that could carry important political messages to the masses. To learn more about Treasure Island and the fair, click here. 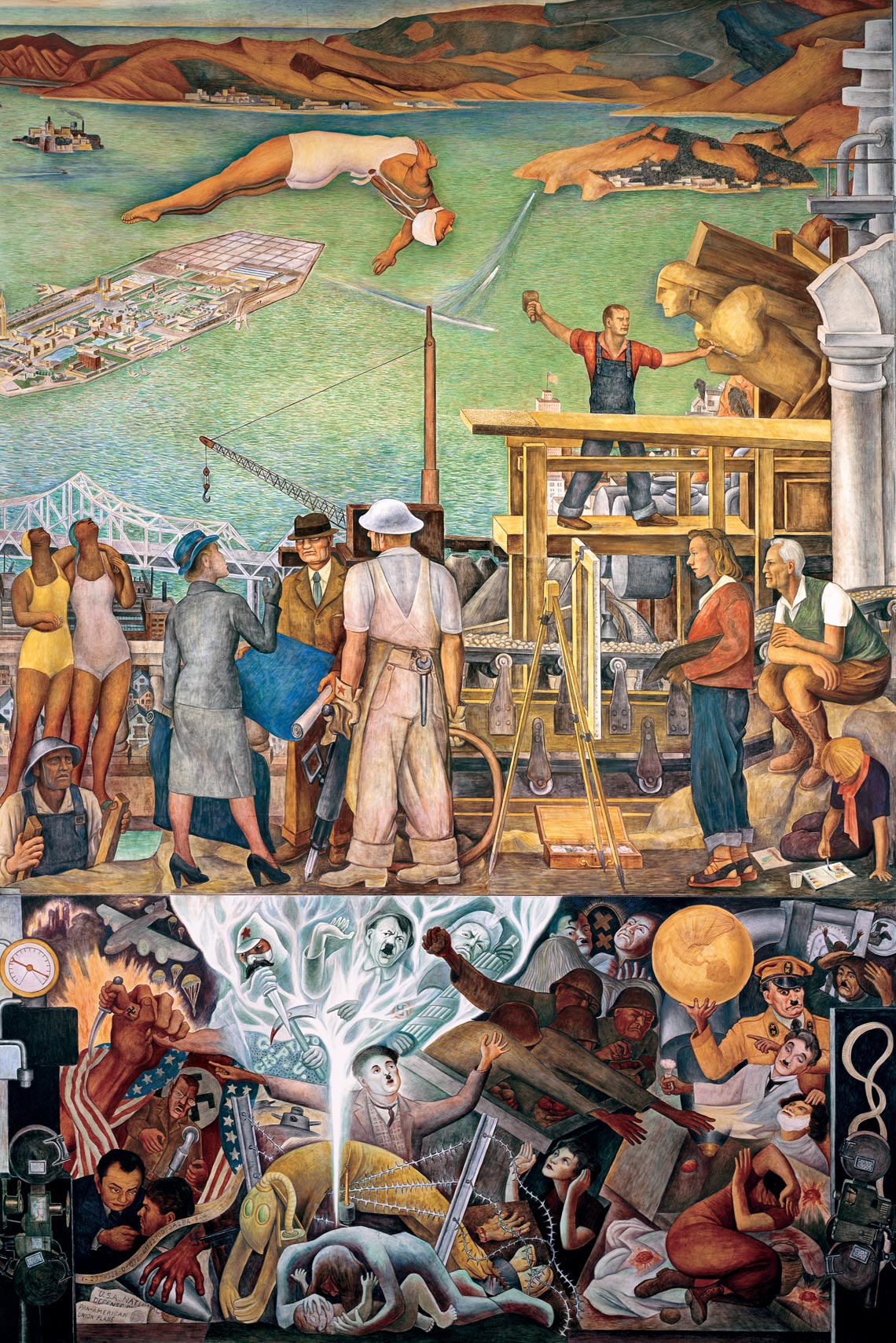 Otto Deichmann, 1893-1964, German-born American architect who designed the Shasta-Cascade Building at the GGIE.

Emmy Lou Packard, 1914-1998, Rivera’s primary assistant in the mural project, a prominent artist and social activist, who led the effort to save the Rivera inspired Rincon Annex murals in San Francisco.

Joseph Stalin, 1879-1953, Adolf Hitler, 1889-1945, and Benito Mussolini, 1883-1945, depicted as a trinity of tyrants emerging in a gaseous tree-like shape and surrounded by scenes from anti-fascist films. Although regarded as extreme opposites, the Communist Stalin and the fascists Hitler and Mussolini are here allies through the 1939 Non-Aggression Pact. Stalin holds a knife and bloody piolet (ice climbing ax) to echo a hammer and sickle emblem; the piolet alludes to Stalin’s responsibility in the assassination of Trotsky. Below this image the initials “G.P.U.” (the Soviet secret police) and the word “Gestapo” (the Nazi secret police) form a cross, as if to show their common purpose. Below them a World War I soldier in a gas mask lies fallen across barbed wire.

The arm and hand of an aroused America (emerging from the machine) halting the forces of ruthless aggression.

Edward G. Robinson, 1893-1973, Rumanian born actor, and Francis Lederer, 1900-2000, Czech-born actor, depicted in a scene from the 1940 film Confessions of a Nazi Spy. Robinson and Lederer were also early collectors of Mexican art.

Heinrich Himmler, 1900-1945, leader of the Nazi SS, in charge of Nazi concentration camps and known for “The Final Solution.”

Charlie Chaplin, 1889-1977, in The Great Dictator, in which he portrays both Adenoid Hinkle, a satire of Hitler, and a Jewish barber. Chaplin appears in this panel several times.

Charlie Chaplin, 1889-1977, in The Great Dictator, in which he portrays both Adenoid Hinkle, a satire of Hitler, and a Jewish barber. Chaplin appears in this panel several times.