“Symbolizing this union (between North and South) was a colossal Goddess of Life, half Indian, half machine. She would be to the American civilization of my vision of what Quetzacoatl [sic], the great mother of Mexico, was to the Aztec People.

This idea was elsewhere expressed in a portrait of Dudley Carter, an engineer who returned to a pure expression of plastics, using only primitive materials and implements, such as a hand axe. I also painted a portrait of my wife Frida, a Mexican artist of European extraction, looking to the native traditions for her inspiration. Frida represented the vitality of these traditions in the South as Carter represented their penetration into the North.

The kinship of the Mexican and American traditions was further represented by an old Mexican planting a tree [sic] in the presence of a Mexican girl, as an American boy looked on. Nearby I painted a portrait of Paulette Goddard, holding in her hands what she called in a press release, “the tree of life and love.” Representing American girlhood, she was shown in friendly contact with a Mexican man”. 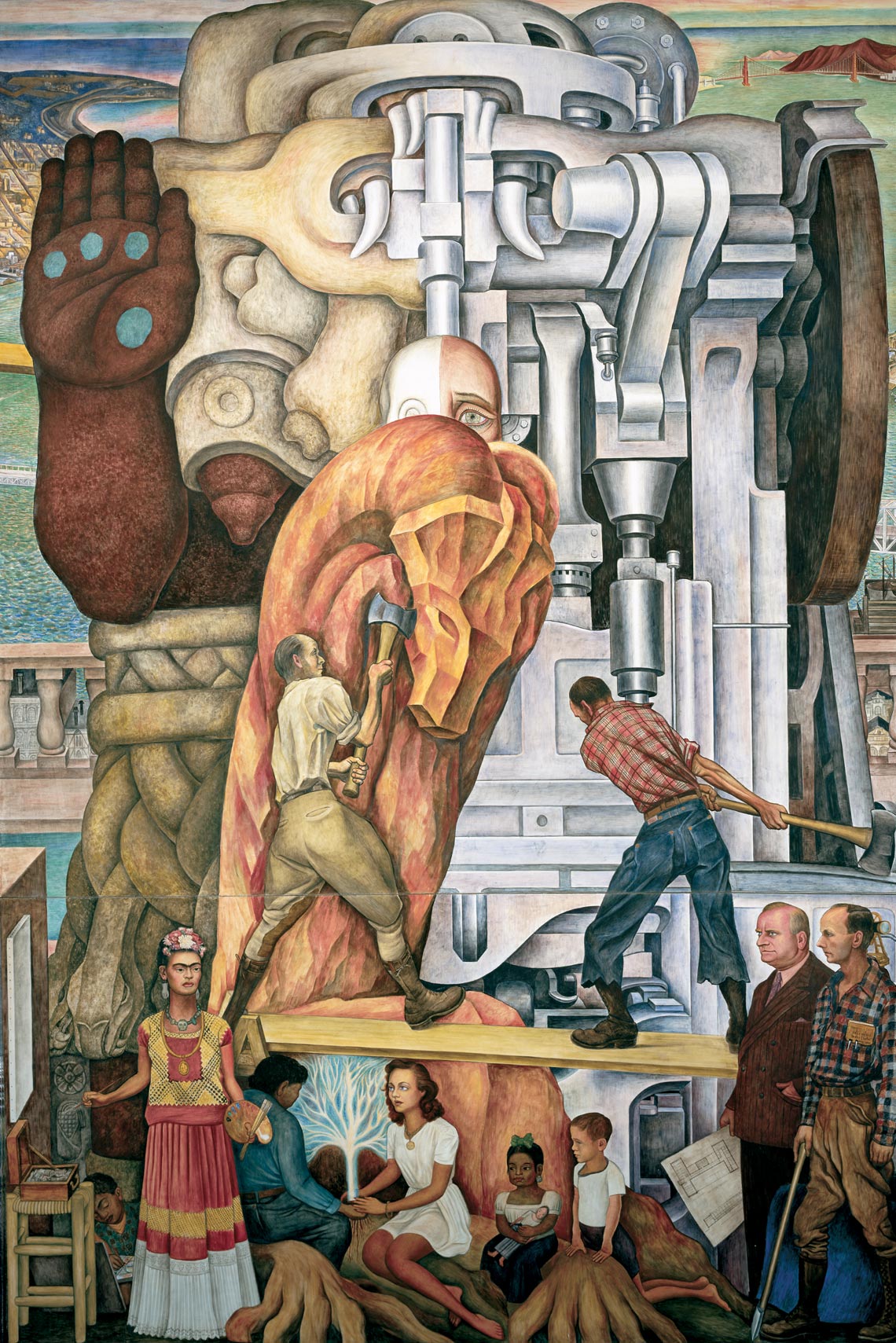 This central figure is the embodiment of Rivera’s merging of the culture and plastic arts of the South with the industrial arts of the North. The left side is a combination of two incarnations of the Aztec diety Coatlicue; “ella de la falda de serpientes” (“she of the serpent skirt”), goddess of Death and the Earth. Her right hand shows jade-jewel calluses, symbolic of the necessity and preciousness of working the soil. In the center is a human head, half bone and half covered with flesh, representing dualities: death and life, past and present. The right side is an auto plant stamping machine which Rivera previously depicted in his Detroit Institute of Arts murals in 1933.

Large wood sculpture of a bighorn mountain ram, carved by Dudley C. Carter. Mascot of City College of San Francisco, it stands in the lobby of Conlan Hall.

Dudley C. Carter, 1891-1993, Canadian participant in “Art in Action” who worked directly across from Rivera’s location at the Exposition. He and Rivera became fast friends and his image would be included three times in the mural. Originally an engineer and timber cruiser, Carter later became a sculptor inspired by the traditions of the Northwest Coast Indians. He is carving a wood sculpture of a bighorn mountain ram, which became the mascot of City College. He worked using primitive implements, such as the wood ax depicted here. On the spine of the book in his pocket is one of several Rivera signatures that appear in the mural. The ‘Goddess of the Forest’, also executed at the Fair, today stands across from the mural.

Frida Kahlo, 1907-1954, Rivera’s wife and Mexican artist with a sophisticated background who has turned to native plastic tradition for inspiration. She personifies the cultural union of the Americas for the South as Carter does for the North. Here she wears the traditional dress of Tehuantepec and hand-shaped earrings, a gift from Pablo Picasso in 1939.

Paulette Goddard, 1911-1990, film star and wife of Charlie Chaplin. Here she helps Rivera plant the ceiba tree. When asked later why he depicted himself holding hands with her in the mural, Rivera answered “It means closer Pan-Americanism.”

Timothy L. Pflueger, 1892-1946, San Francisco architect and Rivera’s friend, patron and main collaborator on this mural project, as well as the 1931 Pacific Stock Exchange mural, “Allegory of California.” The plans in his hand are for the grand library at City College, where the mural was destined to go. The library was never built because of U.S. entry into World War II and then Pflueger’s untimely death in 1946.