With a graceful swan dive, the City College diver Helen Crlenkovich blends ancient Mexico into the Bay Area. Rivera wrote, “The conquest of time and space was symbolized by a woman diving…” Poetically, she had a pilot’s license from CCSF.

In the upper section, the contemporary Mexican artisan carving the sculpture of Quetzalcóatl, the plumed serpent god, represents the continuity of Mexican ancient culture as the plumed tail serpentines from a temple in antiquity.

In the lower section, Rivera depicted himself painting in fresco the “portraits of the great liberators– Bolivar, Hidalgo, Morelos, Washington, Jefferson, Lincoln, and John Brown.” 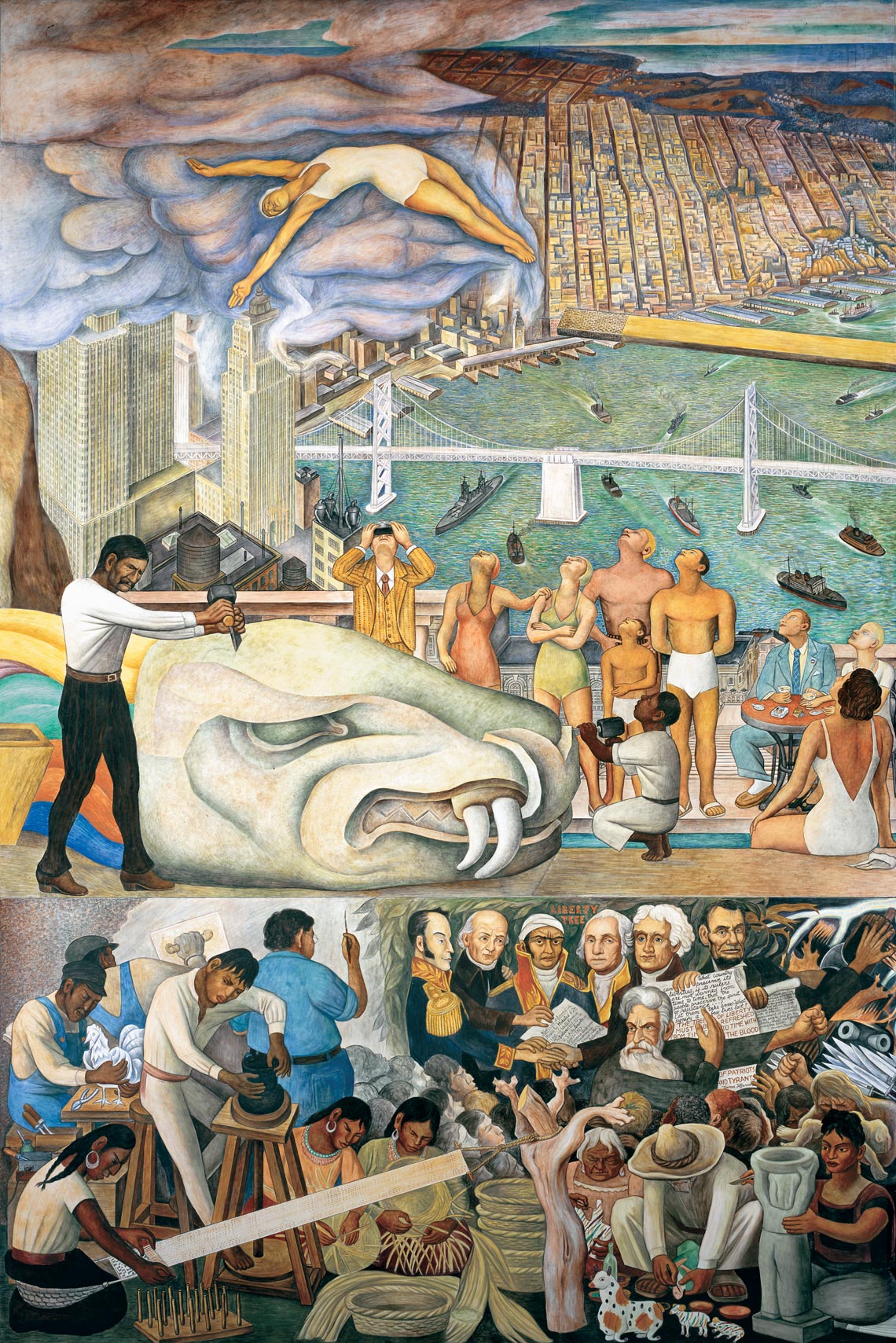 San Francisco Bay Bridge, 1936, with a ‘look and feel’ by architect Timothy Pflueger.

Mardonio Magaña, 1868-1947, peasant artist described by Rivera as “the greatest contemporary Mexican sculptor,” at work on the head of Quetzalcóatl. Magana’s work at the Museum of Modern Art in Mexico City is stylistically similar to Carter’s (sculptor pictured in Panel 3).

Pacific Telephone and Telegraph Company Building, 1924, by architect Timothy Pflueger. Located at 140 New Montgomery St., it was San Francisco’s tallest building when the mural was painted.

Quetzalcóatl, the plumed serpent and supreme Aztec deity. In Aztec mythology, the serpent’s movements symbolized waves of lightning, water, and strata of the soil. The brilliant colors of the Quetzal bird symbolized light.

Mona Hofmann, Rivera’s assistant on the mural who later left the project. In 1934 she worked with him in Mexico City on his mural ‘Man, Controller of the Universe’, a recreation of the destroyed mural at Rockefeller Center. We have her papers.

Contemporary Mexican artists and craftsmen: a fresco plasterer, a potter, a woodcarver, a tinsmith, a weaver and basket makers.

Simón Bolivar, 1783-1830, “the Liberator” and emancipator of the slaves in Venezuela.

George Washington, 1732-1799, a leader of the American Revolution and first President of the United States.

Thomas Jefferson, 1743-1826, author of the Declaration of Independence and third President of the United States. The quotation reads: “The tree of Liberty needs to be refreshed from time to time with the blood of patriots and tyrants.” (From his letter to William Stephens Smith in 1787)

Abraham Lincoln, 1809-1865, 16th President of the United States and emancipator of the slaves, shown with the Gettysburg Address.

Tehuantepec sculptress, representing a matriarchal society in southern Mexico in which women do the creative work.