Panel 1 is a celebration of Mexico’s indigenous past, artistic genius combined with religious fervor set in a dramatic natural background. Rivera wrote: “I depicted the South in the period before Cortes. The outstanding physical landmarks were the massive and beautiful snow-crowned Popocatepetl and Ixtaccihuatl. Nearby were the temples of Nahuatl and Quetzalcóatl and the temple of the plumed serpent. Also portrayed were the Yaqui Deer Dancers, pottery makers, and Netzahualcoyotl, the Aztec poet-king of Texcoco who, according to tradition, designed a flying machine.”

Panel 1 forms the left side of a visual parenthesis that balances North and South. The right side of the mural completes the parenthesis with a celebration of Northern California’s technological boom of the nineteenth century (see Panel 5). 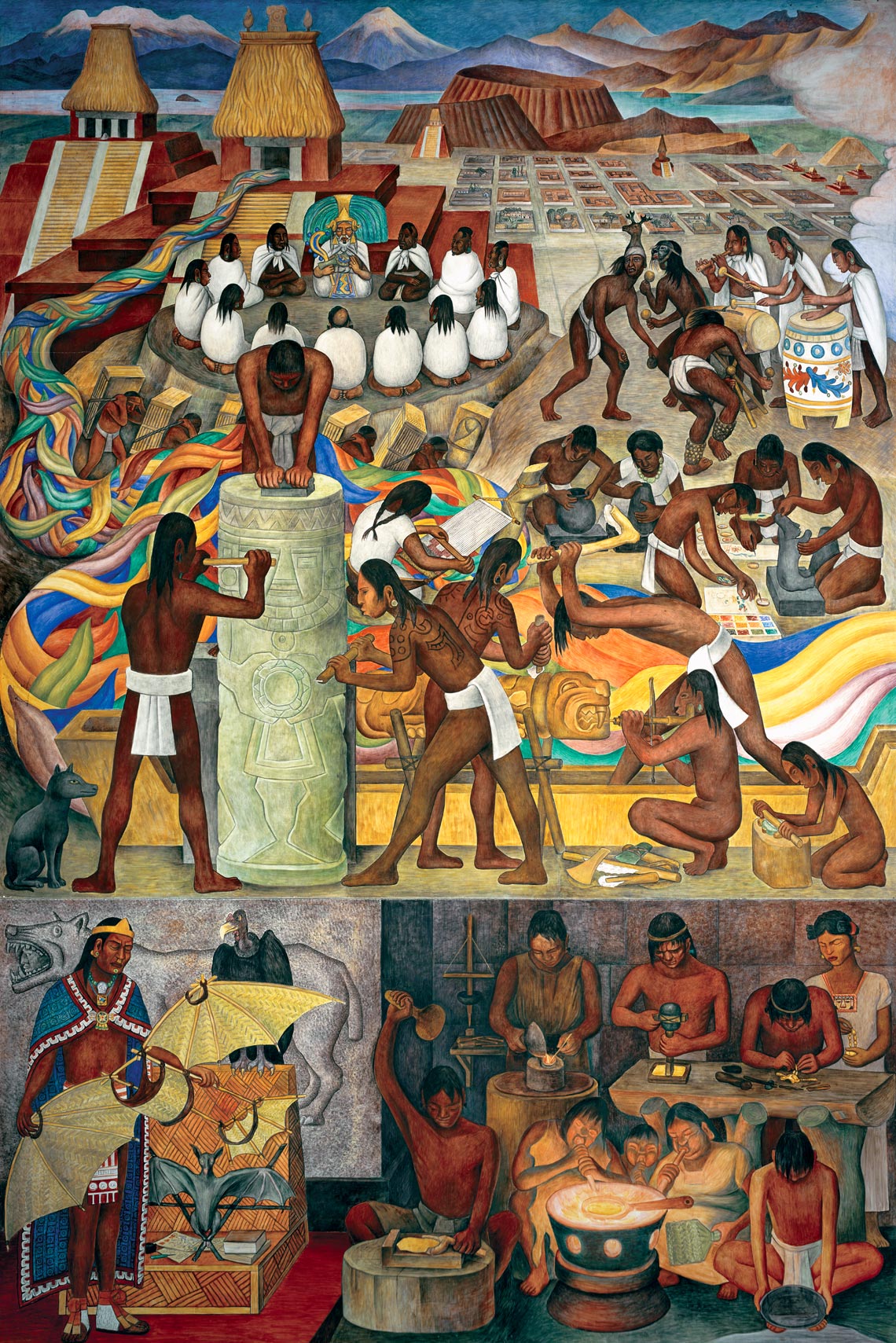 Mounts Ixtaccihuatl and Popocatepetl, volcanoes to the east of Mexico City. All of the high peaks of Mexico appear, from left to right, on a South to North progression.

Composite scene representing the temples of Tenochtitlan, ca. 1325 AD, the Aztec capital (present day Mexico City), and Teotihuacan, site of an ancient temple complex, in use about 300-600 AD, where polychrome murals adorned the walls of some buildings, many depicting deities later revered by the Aztec.

Deer dancers and musicians from the Yaqui tribe of northern Mexico.

Group of pre-conquest artists decorating an Olmec figurine, possibly based on one Rivera had in his private collection.

Toltec artisans at work polishing a round stele resembling a human figure. One of the artists has a jaguar tattoo.

Xolotl, Rivera’s pet Xoloitzcuintli dog, a breed developed by the Aztecs whose name means “dog of Xolotl,” the god of twins and things deformed. Rivera and Kahlo collected them and used them as models in their paintings.

Nezahualcoyotl, 1403-1470, poet, inventor, and King of Texcoco, which historians now describe as the Athens of the Western world. He is pictured with a flying machine he, according to tradition, invented.

Mixtec metalworkers. The Aztec referred to Northwest Oaxaca as Mixtlan, “place of the clouds.” The work of these artisans was highly regarded and many were brought to Tenochtitlan to make gold jewelry using the lost wax process.