… a sweeping synthesis of the art, religion, history, politics, and technology of the Americas that is as timely now as it was eighty years ago.

Diego Rivera is internationally acknowledged as one of the 20th century’s most important muralists and influential artists. Rivera’s style is a unique synthesis of European painting, socialist ideals, and the cultural riches of pre-Columbian indigenous Mexico.

He gave the people of the San Francisco Bay Area an extraordinary work of Pan American art and an inspiring vision of Pan-American Unity. His grand, 22′ high and 74′ long, mural, is entitled “Unión de la Expresión Artistica del Norte y del Sur de este Continente” (The Marriage of the Artistic Expression of the North and of the South on this Continent). It is a sweeping synthesis of the art, religion, history, politics, and technology of the Americas that is as timely now as it was eighty years ago.

Rivera painted this masterpiece, now commonly called Pan American Unity, in 1940 as part of the Golden Gate International Exposition on Treasure Island in the San Francisco Bay. He was commissioned by the organizers of the 1940 Golden Gate International Exposition to paint a large-scale fresco during the run of the fair. It was the centerpiece of Art in Action, an innovative exhibit where fairgoers could watch artists create their work.

The mural includes three self-portraits and a portrait of his wife, artist Frida Kahlo. It is a unique combination of an artist in his prime and a critical moment in world history brought together on a monumental scale. It is arguably the most important work of art created in the Bay Area.

After the fair closed, the mural was intended to be placed in the new library of San Francisco Junior College (now City College of San Francisco). This library was part of a grand architectural plan developed by Timothy Pflueger, a prominent local architect, one of the organizers of the fair, and Rivera’s patron and friend.

World War Two interrupted these plans. Pflueger’s library was never built and the ten panels of the mural were crated and stored first on the fairgrounds and then at the College until Rivera’s death in 1957. That year, Milton Pflueger, Timothy’s younger brother, proposed to install the mural in the lobby of the new campus theater. The mural was moved into this lobby in 1961.

City College of San Francisco’s Diego Rivera Mural Project has as its mission to return the mural to the position of public importance & influence envisioned by its creator. (It is currently at SFMOMA’s Roberts Family Gallery until January 2024.) 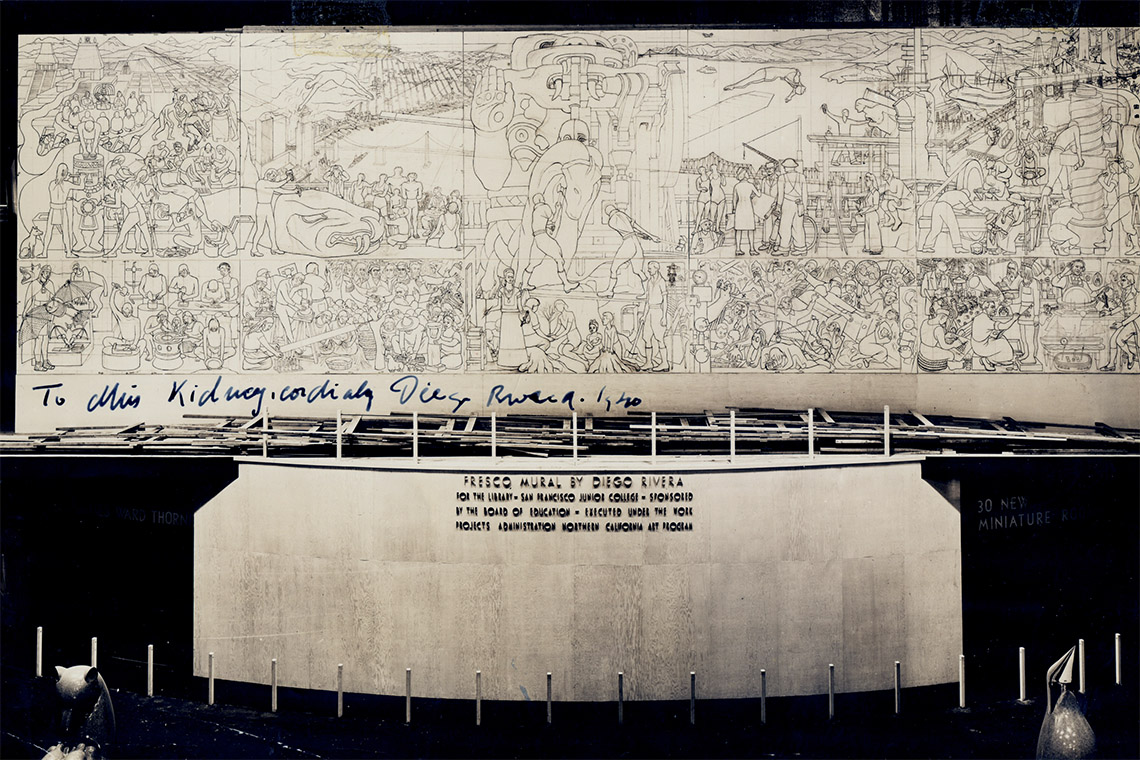 The full-scale sinopia mural drawing on the Portland cement substrate as unveiled on July 25, 1940 for the Board of Education’s approval. When the scaffolding was re-erected, Rivera added Timothy Pflueger, Mona Hofmann’s daughter, and the murder weapon in Stalin’s hand, while painting. He painted the masterpiece in four months.