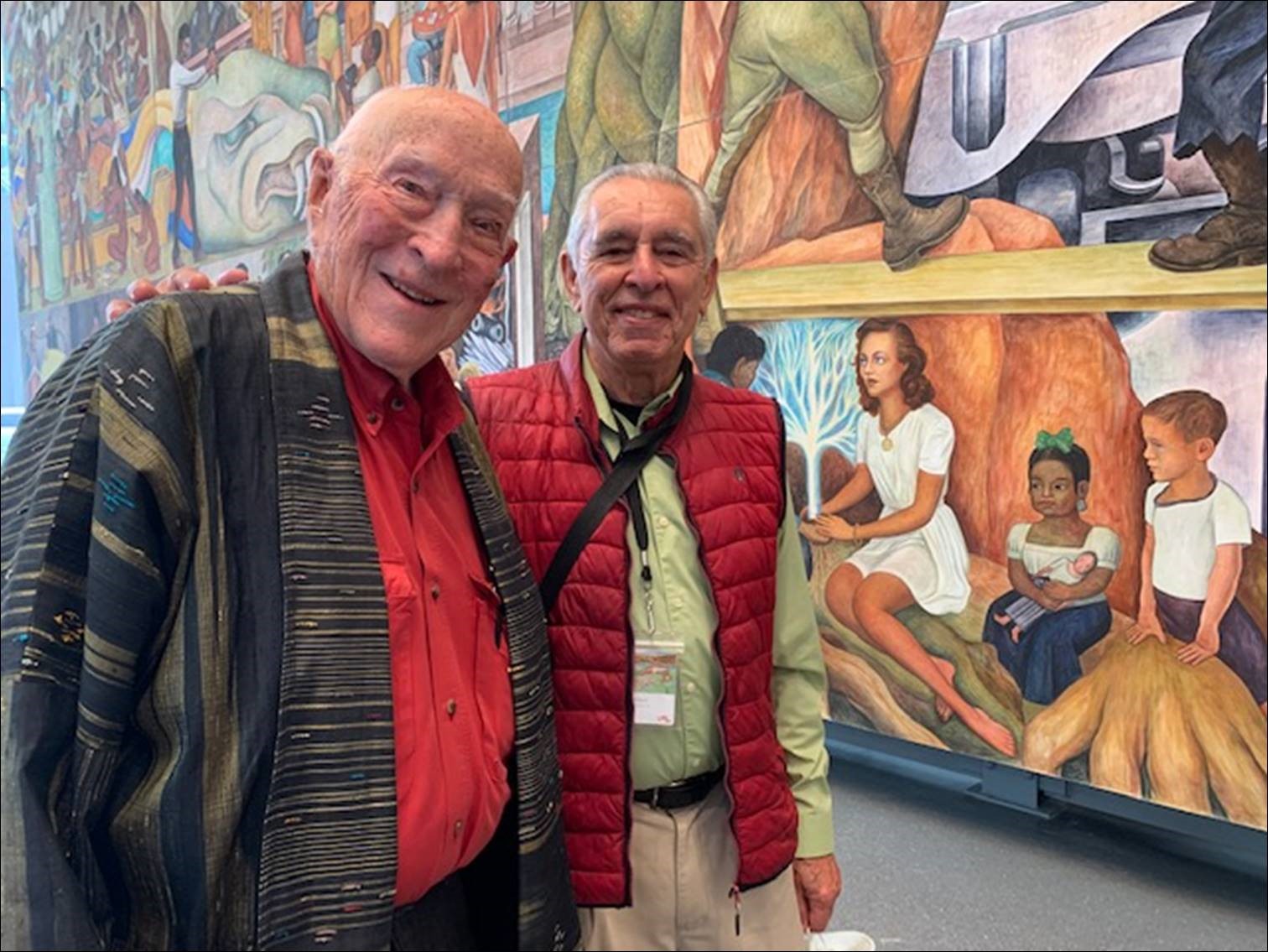 Don and Will at the mural. (Photo: Kathé Cairns)

Here is the link to the NBC documentary on the mural move.

To celebrate the birthday of Donald Cairns, the little boy in the mural, 30 of his church members came out to SFMOMA for a Saturday tour. Emmy Lou Packard’s son was only 5 years old when he posed for the mural. Years ago, Donald gave my late Rivera partner Julia Bergman access to Emmy Lou’s papers, our first cache of primary resource material. Julia flew to Philadelphia, where the Cairns then lived, and photocopied like crazy. Emmy Lou had spent years doing research for a never-written Diego Rivera in San Francisco book. Her first-hand experience as Rivera’s assistant/secretary on Pan American Unity resulted in many insights. But, not having initially been the primary assistant left holes in the narrative, which were often filled by architect Timothy Pflueger’s papers, our second cache of primary source materials. These copies were kindly provided by nephew John Pflueger.

Over the years many “friends” have been very generous in sharing information. Recently, I was directed to a private party who had some interesting material about Diego, including a painting that will be in SFMOMA’s Diego Rivera’s America exhibit next summer.  1936 film footage of an affectionate Diego with artist Marion Greenwood was enlightening. It may answer a question I’ve had for some time. How did Isamu Noguchi and Frida get away with an eight month affair? The affair only came to an abrupt end when the bill for their love-nest furniture was mistakenly delivered to Rivera. It appears that Diego may have been preoccupied elsewhere. 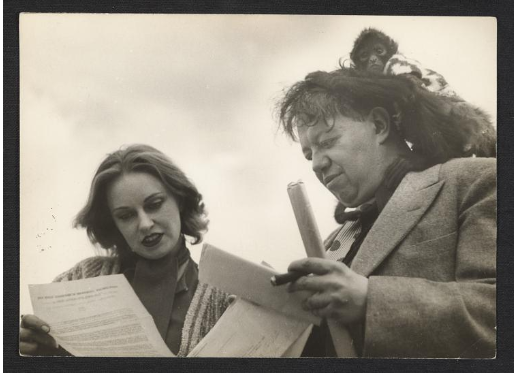 Both Isamu and Marion, who had previously known each other romantically as art students in Paris, were part of the muralism program at the Mercado Abelardo Rodriguez in Mexico City, nominally under the direction of Diego. An intriguing aspect is whether Isamu and Marion knew what the other was up to? Isamu, who had done a bronze bust of George Gershwin in 1929, was present when the great composer visited México in November 1935. In 1925 Miguel Covarrubias had done a Gershwin caricature for his book, The Prince of Wales and Other Americans, and was also present to greet Gershwin. Gershwin’s copy of the book is one of my prized possessions. Coincidently, both Marion and Gershwin were from Brooklyn.

Feliz Cumpleaños to our dear friend Dra. Guadalupe Rivera Marin, Diego’s daughter, whose birthday is October 23. I send along Pedro Infante and Las Mañanitas. Having recorded an interview with her in 1999, in May 2006 she invited Julia Bergman and me to Mexico City for her Encuentro Internacional de Pintura Mural. This encounter of a couple of hundred muralists from all over the world was a highlight of all the years working on mural research. Last time I saw her in San Francisco at the Brava Theater in June 2018, I gave her a framed photo of herself as an eleven year old, with her sister Ruth and Diego in front of the cactus fence at the Casa-Estudio. The photo was taken by George Gershwin (and given with permission from the Gershwin Trust).

History Matters in the Mission, a street procession with live music and theater, will be performed Saturday Oct. 23 (12-6 pm) in our beloved Mission district, San Francisco.

Have spent a lot of time with the mural and it’s always fun to see friends. So many people have already seen the mural at SFMOMA in its first four months. Occasionally, the visitors have known the mural and can best appreciate the startingly change in venue. The added depth of the lobby allows a comprehensive view in addition to the close-up view of paint strokes. When the morning raking sunlight hits the mural, it seems to shimmer. (Frescos are impervious to UV light.) Similarly, I got to see the mural at 11 pm, while walking back from a Giants game. It is an Edward Hopper moment seeing Diego’s nighthawks showcased, when everything else is darker.

At a recent lunch graciously hosted by the City Club for representatives of the various groups who participated in the mural move, our fresco conservators Anne Rosenthal and Kiernan Graves got to inspect Rivera’s Allegory of California  (link to my late colleague Masha Zakheim’s essay), which adorns the stairwell between the 10th and 11th floors. It’s a shock after the last several years to not have these people in my life on a daily basis, even if it was often Zoom. On the days we do get together, we try to cram as much friendship as we can into one day. Hopefully, the “home” team will reconvene down the road to escort the mural back to City College. A new Chancellor, Dr. David Martin, will start November 1. Back in 2015 as a financial officer at CCSF, he facilitated transferring funds from the CCSF Foundation to the College so that we could do the initial photogrammetry shoot. The amazing results are now posted at Stanford University.

Had a nice mural visit with Susan Kirk, niece of the late Oakland-born artist Marjorie Eaton. We had been connected years ago by John Crosse, whose blog has been an indispensable resource to me. Ms. Eaton had an adventurous life. She lived in Taos after driving there by herself in a Model A and found the love of her life. She hung out with Diego and Frida in NYC (where she roomed with Louise Nevelson) and later stayed at the Casa Azul and lived in Mexico. Later, she gave up painting and became an actress, playing the original role of Emperor Palpatine in Star Wars: The Empire Strikes Back and appearing in Mary Poppins. Marjorie is a great example of the profound Mexican influence on artists from the United States.

The Victor Arnautoff murals at Washington High School just got a favorable ruling from the judge, which will prevent them from being painted over or destroyed by the SFUSD. Congratulations to Lope Yap, Jr. and to all the people who stepped up to save the San Francisco treasures. ¡Si se puede! (However, the school board is appealing.)

There was also a U.S. judgement in the ongoing battle between Frida Kahlo’s family and the Frida Kahlo Corporation. Diego left the intellectual/artistic rights for his and Frida’s works (e.g., rights to reproduce images of their artworks) to México. Other rights to the lucrative  commodification of Frida (e.g., rights to make Mattel’s Frida Barbie doll) have been contested. How hot is Frida? Frida’s Diego y Yo, is getting ready to set a record at a Sotheby’s auction in November. Since the work is outside México (it’ll be displayed in Hong Kong, London, and NYC), it is not designated part of the Mexican national patrimony, which precludes it leaving the country, even after a sale.

There was a very nice piece recently on the Hijos del Sol, whom I’ve had the honor to do mural tours for in the past. They provide nourishment for the soul.

Diego Rivera’s Pan American Unity Part 1 – YouTube: Link to my recent presentation and Q&A for the Community Living Campaign. This group “uses the power of relationships to reduce isolation and to eliminate barriers to aging in community.”