ALERT: Rick Tejada-Flores’s, My Bolivia, will be on KQED World on October 8 at 7 pm PACIFIC. Rick’s works include PBS Masters Rivera in America and Orozco, Man of Fire. (The collection for Rivera in America is now housed at Washington University in St. Louis. Though Rick had generously offered it to us, we did not have the facilities to archive and share it with scholars.]

Rick wrote that he may have sent a “cartoon” for the Treasure Island mural image to the Archives of American Art. Rivera’s assistants, like Emmy Lou Packard, created the “cartoons” to transfer mural images to the wet fresco plaster by pouncing the perforated tissue paper with a rosin bag. We’re working to track it down.

Special thanks to Michele McKenzie, CCSF’s Media and Electronic Resources Librarian. She tracked down the elusive Walls of Fire: Rivera, Orozco, Siqueiros DVD and will acquire a copy for use by CCSF classes. Thanks to all of you who offered suggestions. (Serendipitously, Michele worked with Rick Tejada-Flores as an archival researcher on The Fight in the Fields.)

In limited release Dolores, the 2017 documentary about Dolores Huerta is a powerful, moving, and frank depiction of the tribulations this great woman suffered for the farmworkers. She sacrificed a spleen and four broken ribs to an SFPD baton in 1988. In the past she has spoken to our students at the Diego Rivera Theater.

Happy belated birthday, September 27, to our dear friend Don Cairns. Emmy Lou Packard’s son is the little boy in the front of the mural.

Just back from a visit on the autumnal equinox to Spain and Portugal. The Museu Picasso in Barcelona was a favorite, especially his collection of obsessive riffs on Velasquez’s Las Meninas. Unfortunately, the Galeria Joan Gaspar was not open during my stay. It’s home to Picasso’s Self Portrait as a Suitor, a drawing which has Diego Rivera approaching him. James Oles used it in his catalog essay for LACMA’s Picasso and Rivera: Conversations Across Time.

Before going to Barcelona, I re-read the wondrous The Shadow of the Wind by Carlos Ruiz Zafón; something I’d done the last two times I’d gone to that magical city. At Antonio Gaudi’s La Sagrada Familia, under construction for 135 years, it was fun trying to locate the now-installed, apse sculptures I’d sketched while living in Spain in the later 70’s. Then, I just wandered about the “gargoyle” strewn grounds, often drawing while seated on a giant granite snail. Now, 40 years down the road, it’s all guards and metered entrances, which sell out before noon. There’s an elevator in an 185 foot spire Carmelita and I climbed more than once.

The cathedral construction is a metaphor for the work being done around our mural; a masterpiece which may last hundreds of years. The people who poured the cathedral’s foundation were never destined to see the spires rise. The many existing spires will be dwarfed by the yet-to-be-built center spire, scheduled for completion by 2022. I hope to see the mural to its new home. (Losing Julia Bergman, my dear friend and 20 year Rivera partner, earlier this year has been very sobering.)

CCSF’s Chancellor Mark Rocha is moving forward on the College’s plans for the Performing Arts Education Center and on significant offers of help with the mural move to this new site.

Within hours of sending out our last missive, Larry Heilman wrote me that as a 4 year old in 1940 he was at a Mexico City bullfight, where Paulette Goddard received flowers from a matador. Larry’s father filmed it and we’re trying to find and post that film, which should be with his nephew here in the Bay area.

Thank you for including me in the distribution of “Friends…” I read it always with so much interest…you make the best news about “El Gordo” (Diego R.). I called him “El Gordo” because during my last years in Mexico City, somehow there were times I was kind of close to María Félix, and that was the way she referred to Diego…”El Gordo”. You know they were very good and close friends. However apparently Maria took good care not to let him go ahead with his desire/love for her. He was really madly in love with her; but she was a lot younger and had many other men (especially richer) around her. However she knew how convenient it was for her having him as a friend. She once declared “El Gordo estaba muy enamorado, pero no tenia ‘billete’”. (“Rivera was very much in love [with me], but he had no money.”)

Quite a while back at the Trotsky Museum in Mexico City, Esteban Volkov told me how the murder weapon that killed his grandfather had surfaced on eBay. It was quickly unlisted. Now it seems the historic weapon, a piolet, has surfaced again; this time destined for a spy museum in Washington, D.C. It is a shame the weapon will not reside at the scene of the crime.

At the 15th anniversary party for Cultural Heritage Imaging, I met Layna White, SFMOMA’s Head of Collections, Information and Access. We hope to store a copy of CHI’s finished Rivera mural photogrammetry file there for posterity. SFMOMA already houses over a 100 Rivera drawings, several of our mural.

The DeYoung’s Teotihuacán: City of Water, City of Fire show is open. LACMA’s Found in Translation: Design in California and Mexico 1915-1985 show, part of the Getty’s Pacific Standard Time: LA/LA is also open, as is Another Promised Land: Anita Brenner’s Mexico (Here is more background on that show).

Longtime volunteer Maureen Bourbin is transcribing the recently acquired Dudley Carter audio cassette interview, a gift from artist Emmanuel Montoya. Thanks to CCSF’s Kwame Evans and Dana Galloway for their technical help in making a digital copy. The audio and transcript will be posted on our website’s Dudley Carter page, now being developed.

Recently, filmmaker Wesley Miller was at the mural during 12 days of local shooting for what will be a 3 minute video for the Smithsonian’s Archives of American Art. The video is based on a letter Frida sent to Emmy Lou Packard. Jean Franco stars as Frida in the video.  I will post the link as soon as the work is public. After the shoot was over Jean and I ate a pilgrimage meal at the Cathay House on California Street. Diego and Frida may have had one of their last meals in San Francisco there in late December 1940. Having just re-married at City Hall, they left separately for Mexico City by the end of the year, never to return to the U.S. 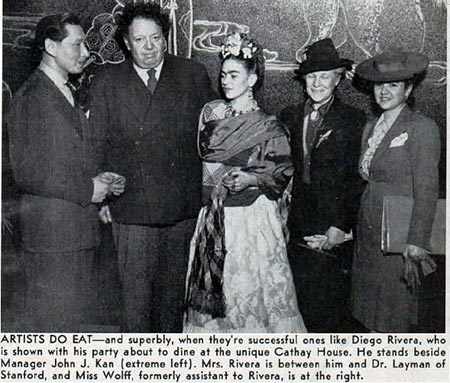