In June of 1921, one hundred years ago, Diego Rivera finally found his way home to México.

Shortly before on November 29, 1920 Diego had written to Mexican writer and diplomat Alfonso Reyes:

[“I have a desire to go to work with (my) hands in the dough of my own corn, to see what comes out.”]

Having just returned to Paris from a penultimate trip to study Italian frescoes, it was almost time for Diego to leave Europe after a nearly 14 year stay; to take the technical skills he had learned and put them to the service of México.  Mexican artist David Alfaro Siqueiros had met Rivera in Europe and enthused him with the possibilities of public art in México; he later took credit for reigniting Rivera’s “patriotism.”

This letter was dated exactly 20 years to the day before Diego signed the Pan American Unity mural in 1940. Painted as the world slid into a convulsive war, we cannot understand the mural without knowing the times. To measure how far Diego had come in those two decades, Dr. Grace McCann Morley, director of the San Francisco Museum of Art (now SFMOMA), evaluated the mural in a letter to Art Digest in December 1940:

“I have seen it and believe it is a really great work – technically beyond anything Rivera has previously done…. In intensity of symbolic images, complexity and depth of thought he is of course here going into something much more profound than anything he has previously attempted.”

This summer at SFMOMA get ready to see the Pan American Unity mural as it’s never been seen before! At ground level and in your face.

At its most accessible level the Pan American Unity mural is a snapshot of San Francisco as an era closed. The sweeping aerial view depicts the City’s modest skyline. The Pacific Telephone and Telegraph Company building at 140 New Montgomery was the tallest building at 435 feet high. Using rubble in its mortar, the City had rebuilt itself after the 1906 earthquake. Thirty-three years later on an artificial Treasure Island, the Golden Gate International Exposition (GGIE) celebrated the two new bridges across the Bay, but unknowingly signaled the end of a chapter in the City’s history. San Francisco luminaries, philanthropist Albert Bender and architect Timothy Pflueger, helped shape our story and passed on. Their efforts helped bring Rivera to San Francisco in 1930 and saw him off after his 1940 work at the GGIE. Diego’s two visits bracketed his entire working time in the United States. Like belts, the bridges cinched in the landscape. With WWII the Bay became the portal to the Pacific for millions of soldiers. Many others from all over the country were drawn here for the work available at shipyards, the arsenals of democracy. Sloughing off its past, the City would transform into its next incarnation.

As librarian Julia Bergman, my late Rivera partner, used to say, “You can teach anything with this mural.” The mural is infused with historic DNA. Rivera wove “genetic” algorithms into the mural’s fabric; patterns which repeat themselves through time.  Like the conveyor belt on the right side of the mural or the Mexica (Aztec) Calendar, these patterns don’t just suddenly end; they just go around again. Hydraulic mining, depicted by the bare chested figure holding a nozzle, was outlawed because it silted up the rivers, crippling the water flow. Today, some predict an impending critical density of human-made low-orbit debris could hamper space exploration. Venturing out heedlessly, we seem to invariably leave a signature wake of human detritus.

Though these algorithms are deterministic, their outcomes are not necessarily predictable. A single Sol LeWitt instruction set can manifest unique drawings at multiple venues. There will always be dictators like Stalin, Hitler, and Mussolini. But politics are historically fluid. Six months after the mural was finished, Hitler invaded Russia and the totalitarian Stalin was suddenly an ally. Recently, the COVID pandemic has seen science politicized and it is evocative of “Leninist” physics; facts are willfully assigned a back seat to dogma. Rivera ran afoul of the Soviet’s official “Social Realism” and Hitler defined “degenerate art”. Locally, the “Society for Sanity in Art” railed against Rivera and other “modern” artists. The jeopardy some San Francisco murals find themselves in today is, unfortunately, not new.

Rivera had an overriding goal; to get the U.S. into the war against Germany. Like a master chess player, he had looked several moves ahead and realized the peril to the Americas if Hitler was successful in conquering Europe. It’s the only Rivera mural where the United States is the hero; a muscular arm draped in a U.S. flag restrains a smaller Nazi arm holding a dagger. Our mural celebrated all of the peoples of the Americas, a bold counterpoint to racist, anti-Semitic groups like the “America Firsters.” Headlined by Charles Lindbergh and others, “Firsters” also wrapped themselves in the American flag and sought to define their version of patriotism. Samuel Johnson opined about those who as a last refuge invoke “patriotism”. Historic DNA has legs as we saw on January 6, 2021.

The Nazi’s found their eugenics theories in California and modeled their treatment of Jews on American Jim Crowe laws. In 1939 German Bunds with questionable allegiances held a huge “Pro-America” rally in Madison Square Garden, complete with fascist salutes. But later, it was the Japanese who were rounded up. [Like, Miné Okubo, who demonstrated the fresco technique (02:15) for fairgoers on the ground floor at Art in Action.]

[Charles Lindbergh had previously entered the story when, at the invitation of US Ambassador Dwight Morrow, he went to México in 1927. He met and later married Anne Morrow, the younger daughter. The Ambassador commissioned Rivera’s murals at the Palacio Cortes (Cuernavaca) and as a gift for her husband Elizabeth Cutter Morrow commissioned Diego’s first portable fresco Market Scene, 1930. It resides at Smith College.]

As the mural traces its historic journey to SFMOMA, Diego is beaming somewhere. Much of the move’s technical analysis has emanated from the Graduate Mechanical Engineering Department at UNAM (National Autonomous University of Mexico). Its engineers are on-site, continuously monitoring mural panel vibrations with digital accelerometers carefully “grafted” to the fresco surface. As the consummate conservators, welders, riggers, concrete-workers, and movers bustle about, one can almost imagine them as Diego’s figures who have tumbled out of the suddenly liberated mural. One of the crew even wears ironworker’s gloves with a red star like the worker in panel 4. For this project of a lifetime, SFMOMA has drafted the mural’s “dream team.” A foreman, who knows, told me that there is not a weak link in the crew. The mural deserves nothing less.

Photos, a documentary, spreadsheets, and Cultural Heritage Imaging’s on-line, publicly-accessible, photogrammetry record (archived at Stanford’s Library) will document the move for posterity. We will have been faithful stewards on this, our watch. (A warm adios to SFMOMA Project Manager Paco Link, who is moving on, but who had orchestrated the team’s crucial work up to now.) 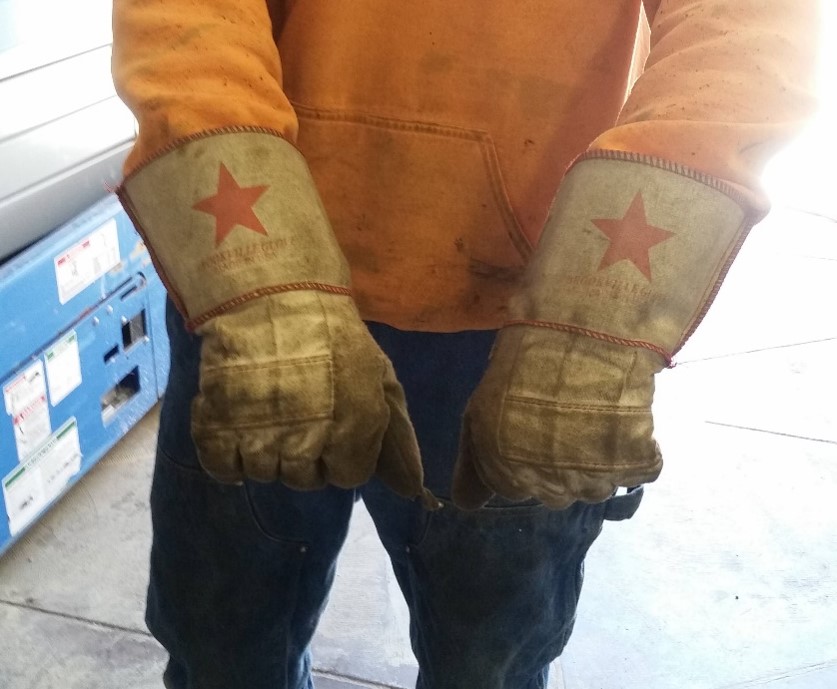 After over a year of peeking through cored holes in the exterior wall, we finally got to see the complete back of lower panel 5 once it was, with excruciating care, coaxed free of the wall. Upper panel 5 was lowered in fits, begrudgingly catching on every protuberance of the wall. The riggers used all their skills to free the panel and for me it was like having a courtside seat at a Warriors game. These right-end panels were linchpins. Their removal would make removal of the other panels easier.  These panels are traveling to SFMOMA under the cover of darkness in stately procession at 5 mph.

The crew has been collecting the wads of newspapers and mechanical drawings which had been stuffed around the edges of the wall’s precast holes. The paper plugged cracks when mortar was poured into the holes to secure the steel rods, which connected the mural panels to the wall. A battered corner of a San Francisco Call-Bulletin newspaper dated Sept. 7, 1960 has part of an article about John F. Kennedy. The election was imminent as the mural was finally being installed at City College.

81 years ago the substrate of Portland cement  had oozed through the panel’s  wire mesh. The square cement extrusions bend gently  downward letting us know that the panels were plastered while standing. 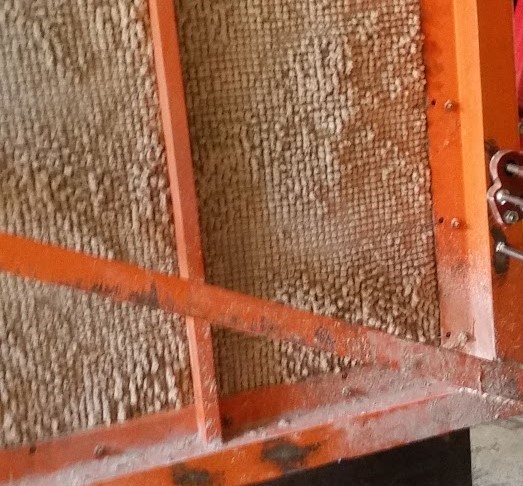 Recently, there is another theory about the destroyed Rockefeller Center mural. In addition to the commonly cited political reasons for its demolition, there is now a proposed logistical reason, “a building technicality.” It may be that due to architectural constraints there was no wire mesh used. The initial coat of plaster was applied directly to the structural wall of the “30 Rock” lobby elevator shaft, so that there was no feasible way to save the mural. The destruction’s rationale continues to be refined 87 years later.

As a barometer of Diego’s stature in the art world in late 1931, he had a one-man show at MoMA, second only to Henri Matisse. Recently, stories have come up about Matisse passing through San Francisco on his way to Tahiti. The San Francisco Art Association bulletin of April 1930 noted that Matisse had stopped by to see the new San Francisco Art Institute campus on Chestnut. Though his local visit was short, he did go to Ralph Stackpole’s studio for a soiree. Wendy Van Wyck Good offers a first-hand account from Esther Bruton. Here is a great picture of Stackpole, Rivera, and Matisse in Montparnasse, circa 1907. Helen Bruton coordinated the Art in Action program where Rivera painted, but complained about his irregular hours. He often showed up to paint after the paying Fair customers had left for the day.

Here is a short BBC video about Frida and Diego.

Here is a Google experiment about Kandinsky and synesthesia. The stunning 2019 Kandinsky show at Bellas Artes in Mexico City is still fresh in my mind or, maybe, my ear.

Looking forward to seeing many of you at SFMOMA. I’ll be the guy in the Barcalounger.