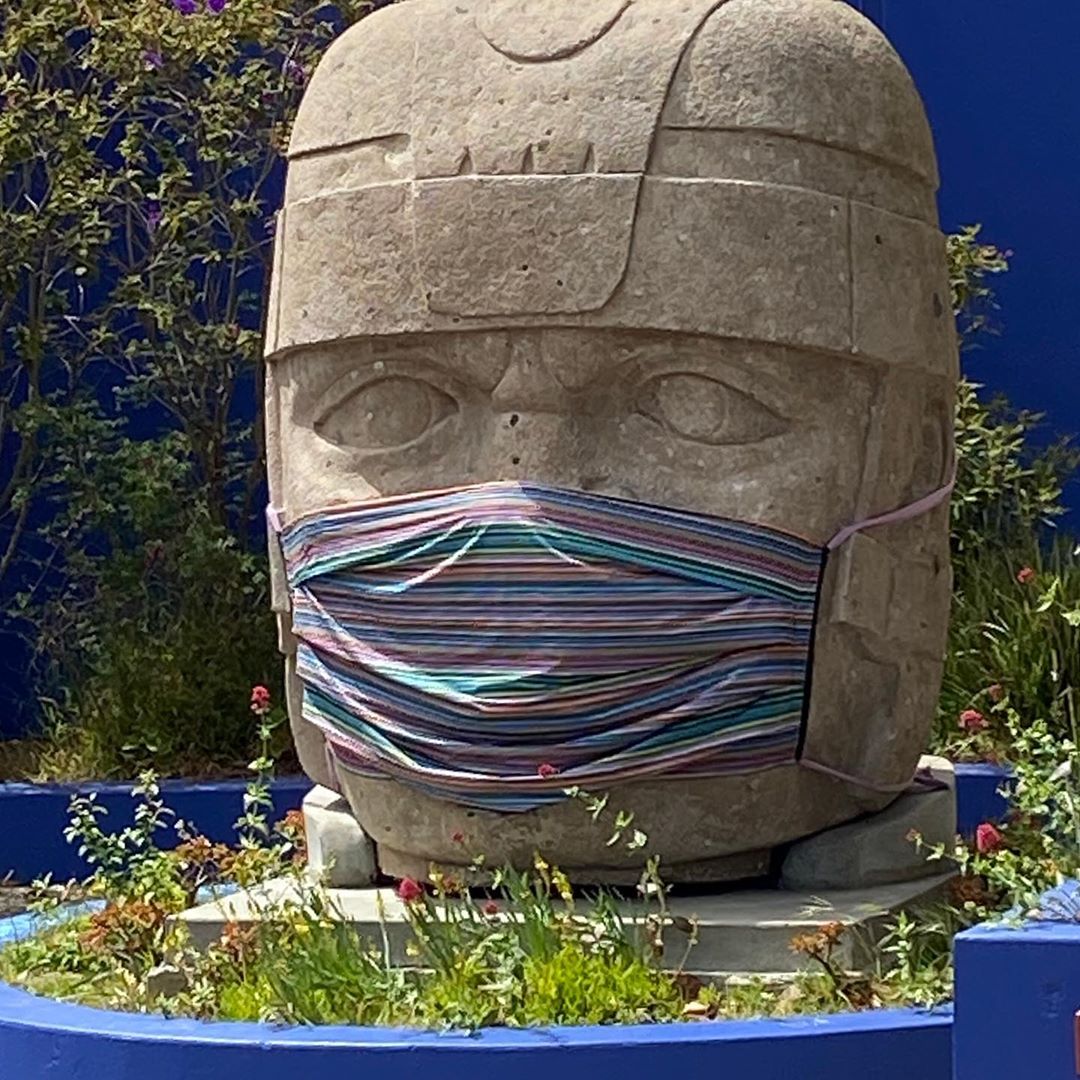 The mask mysteriously appeared. Various photos have materialized of El Rey, our Olmec head replica, hunkered down, standing watch outside the Diego Rivera Theatre. At the sequestered City College of San Francisco, classes became telecourses. The enforced quarantine has given many of us the opportunity to explore. For those not working remotely, it has been a chance to be in another, personal, time zone, as daily life merged into the slow lane.

Many resources have come on-line, some albeit only for short runs. But Alfredo Molina’s turn as Mark Rothko in Red is streaming on PBS Great Performances until May 27. In 2002 Molina had played Diego Rivera in Salma Hayek’s Frida movie.

The San Francisco Public Library has given members access to Kanopy, a cornucopia of great films. The Smithsonian Open Access provides a peek at 3 million pieces of its holdings, for example, a self-portrait of George Gershwin.

Although he does not appear in the mural, George Gershwin’s role in our story is pivotal, almost like a deus ex machina in a Greek play, an outside agent driving the story. His 1935 visit to México led him to advise movie star Paulette Goddard to visit Rivera and get her portrait painted. In 1940, divorced from Frida, Diego was rumored to be ready to marry either artist Irene Bohus or his model Nieves Orozco. When Paulette showed up, Nieves told me that he burned these bridges. While Diego’s infatuation with Paulette didn’t bear fruit, it created the change of trajectory which led to his re-marriage with Frida. The arrival of Paulette created different, but interesting, futures for Irene and Nieves. Over the years I’ve sensed Frida’s warm relationship with George in their brief encounters. Frida and George went shopping together for a dress for another woman. For those not familiar with Gershwin, the recent Carnegie Hall special with Michael Feinstein is a good introduction.

In 1937’s Shall We Dance Gershwin’s long-time friend Fred Astaire sang “They Can’t Take That Away from Me” to Ginger Rogers. The bittersweet song, written very near the end of George’s life, reportedly refers to his feelings for Paulette, who was still married to Charlie Chaplin. In April 2018 I reported how Paulette introduced Diego to Astaire’s choreographer Hermes Pan, which led to Pan’s portrait, Diego’s experiment in depicting motion. Goddard danced with Astaire in Second Chorus, which also featured her next husband, Burgess Meredith.

MoMA’s Dorothea Lange exhibit was only up briefly before the museum closed, but it has posted some streaming features.  NPR did a 4-minute listen.

During its three-day viewing window, the English National Ballet’s Broken Wings, choreographer Annabelle Lopez Ochoa’s brilliant piece on Frida, was a treat. The link still features a ballet trailer and an interview with the choreographer. Tamara Rojo, artistic director of the ENB, danced the signature role as the two Latinas showcased their talents. I had an opportunity to chat with Annabelle about Frida at our mural a couple of years ago when she was working with the San Francisco Ballet and the Smuin Ballet.

Celia Stahr’s new book, Frida in America, came out in early March after a decade’s work. The book quickly became a reference for me. The author’s significant coup was getting access to Lucienne Bloch’s journal. Bloch was a dear friend to Frida and an assistant to Diego at Detroit, at the Rockefeller Center, and at the New Workers School. At the first book signing in San Francisco, we also saw long-time friend Lucienne Allen, Bloch’s granddaughter. Ms. Stahr and I have had a chance to correspond and chat. Her book tour awaits the end of the quarantine.

One of the pitfalls of historical research is to put on blinders and head down a path, you are sure is the right one. You know what they say about assumptions. A scenario about how Frida and Nick Muray hooked-up, which I have been exploring for quite a while, recently took a turn. One of my blinders slipped off. An opinion (which Celia agrees is probably wrong) cited in a footnote, set me thinking in a different direction. The new scenario fits all the constraints of the story’s facts, even more nicely. Unfortunately, people having clandestine affairs, try not to leave too many tracks, except for Frida’s extravagant first love letter to Nick. If initial impressions are important, Nick hit a homerun. (Babe Ruth by Nick.) For all the Frida fans, here is a Virtual Tour of the Casa Azul.

Good news for our project was the passage of the bond issue which will fund the construction of the mural’s future City College home, a new Diego Rivera Theatre. It will be installed upon its return from SFMOMA in 2023.

Paco Link is SFMOMA’s Rivera Project Coordinator. The mural move team’s trip to México was cancelled because of the pandemic. UNAM (National Autonomous University of México), where we were due to work with the graduate mechanical engineering department, also closed. The bi-national work continues via teleconferencing as the various aspects of the mural move proceed.

For the Whitney’s  Vida Americana: Mexican Muralists Remake American Art, 1925–1945, Paco Link had previously directed an immersive, three screen film on the Abelardo Rodríguez Market and the adjoining, almost forgotten, Teatro del Pueblo, including murals by Pablo O’Higgins. The Whitney has not announced revised dates for the exhibit, but has put the art on-line. Everyone from Forbes to the NY Times has enthused about the show’s significance. PBS did a segment on the effect of Los Tres Grandes on the contemporary Mexican muralism scene.

Rivera had been in artistic exile from the United States since the destruction of the Rockefeller mural in February 1934, which caused the cancellation of future mural work in the US. In 1940 he returned to a “minefield” whose geography he now knew better. Moreover, the sides had been redefined. In earlier times, his murals might contrast an exploitive capitalist society versus the utopian socialist society. But in 1940 the sides were a democratic society versus a totalitarian society.  Our mural reflects the Stalinist Soviet Union alignment with Nazi Germany and fascist Italy.

After the 1939 Non-Aggression Pact signed by the USSR’s Molotov and Germany’s Ribbentrop, many communists were in a dilemma. Had the Soviet Union just inked a pact with the “devil”? Many communists, unable to swallow this cynical agreement, fled the party. But the “true believers” had to concoct a rationale for the pact being a brilliant move. The obvious upside of the Pact was that it bought Stalin time, but, ideologically, it was a weak excuse. After the war started, the local communist stance was for neutrality, denouncing any attempt by the United States to enter the war against Nazi Germany and by inference their ally the Soviet Union. Ironically, this aligned the communists with the America Firsters, a right-wing group in which Charles Lindbergh and Henry Ford were prominently involved. This group promoted neutrality, but perhaps out of an infatuation with Hitler and his anti-Semitic policies. Lindbergh said that we did not want to go against Germany’s military might, which he had witnessed first-hand. For communists everything would change in June 1941, when Hitler invaded the Soviet Union.

One of Rivera’s themes in our mural was the benefits of industrialization, which explains Diego’s infatuation with Henry Ford, despite his politics. In 1943 with the Soviet Union now a US ally, Diego was even more looking to the industrialization of the countries of the Americas. The Museum of Fine Arts Houston offers a database with over 8000 Documents of Latin American and Latino Art. In Arte y Panamericanismo [ICAA RECORD ID 747269], Rivera stated:

“This contributes to Pan-American unity and to the notion that-in conjunction with the planned industrialization supported by the United States-America will not perish beneath the rubble of the racist and oppressive world prone to slavery, but rather will lay the foundation for a new, better and free society.” [my italics]

The American Alliance of Museums and International Council of Museums May meetings in San Francisco were cancelled, but some features may go on-line.

Here is news from the Canal Alliance on the inspirational Dr. Resa.

A year and a half ago Jean Franco and I were interviewed by StoryCorps. Here is their link to my late partner Julia Bergman and me being interviewed in 2010 (use Chrome browser.) Having a librarian as a research partner was wonderful. Having a person I so admired call me friend was sublime.