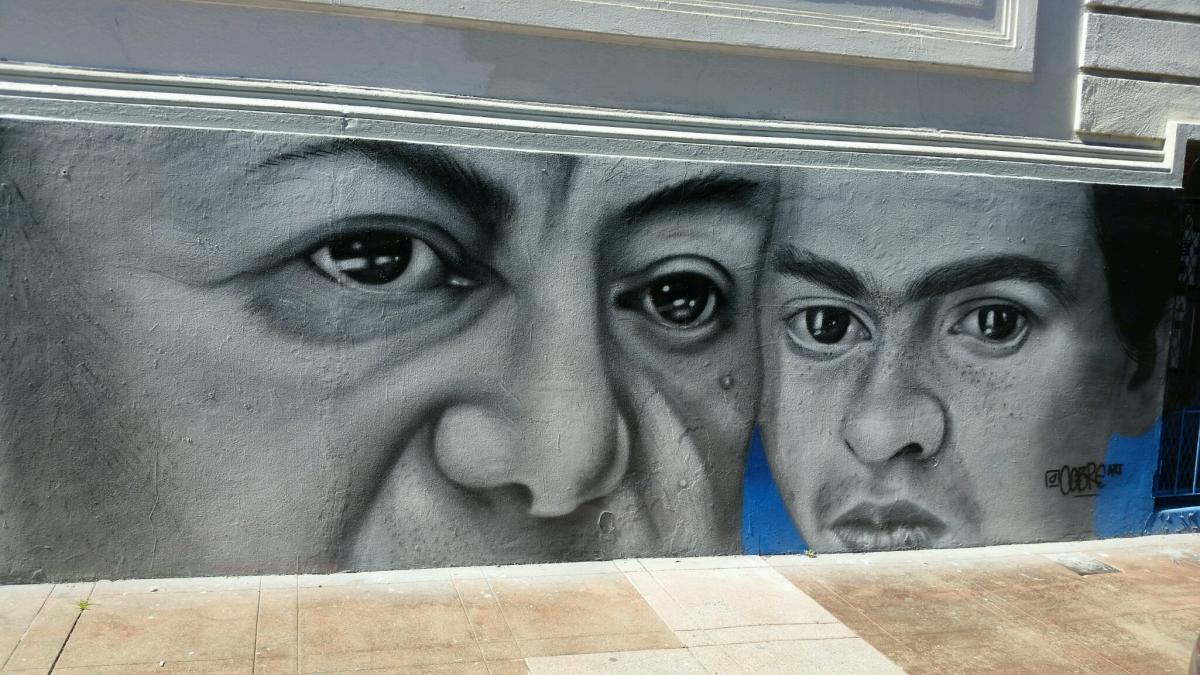 As San Francisco’s Mission district gets gentrified beyond recognition, there’s some push back. Jean Franco just alerted me to a new mural; it appears Diego and Frida are watching! (200 block of San Carlos).

Got a  message from muralist Juana Alicia that she is bringing her art class to see the mural next week. In talking about our mural, I like to point out that what México brought to the “Marriage“ was continuity of culture, especially in its plastic arts (painting, sculpture, jewelry, etc.) We have a 9 foot high, 14 ton replica of a 3000 year old Olmec head.

It occurred to me that Juana is the heir of that continuity. The Women’s Building on 18th Street is a local treasure, a frequent stop on my neighborhood walks. Santuario/Sanctuary, her fresco painting at the San Francisco International Airport, is a collaboration with our friend artist Emmanuel Catarino Montoya, who created the sculptures. The Discovery Channel approached us and is coming next month to do a segment on Dudley Carter’s Goddess of the Forest, which is across from the mural in the lobby of the Diego Rivera Theatre. I contacted Emmanuel, who as a CCSF art student helped Dudley restore his pieces on campus. Some more continuity.

Note: Few of the artists who created the murals for which the Mission is famous, can afford to live here and many of the artistic legacies are being orphaned.

On May 23, 2019 SFMOMA will host the public unveiling of JR’s The Chronicles of San Francisco. All 1200 people in the video mural are invited.

My Treasure Island Museum talk is re-scheduled to November 16, 2019. 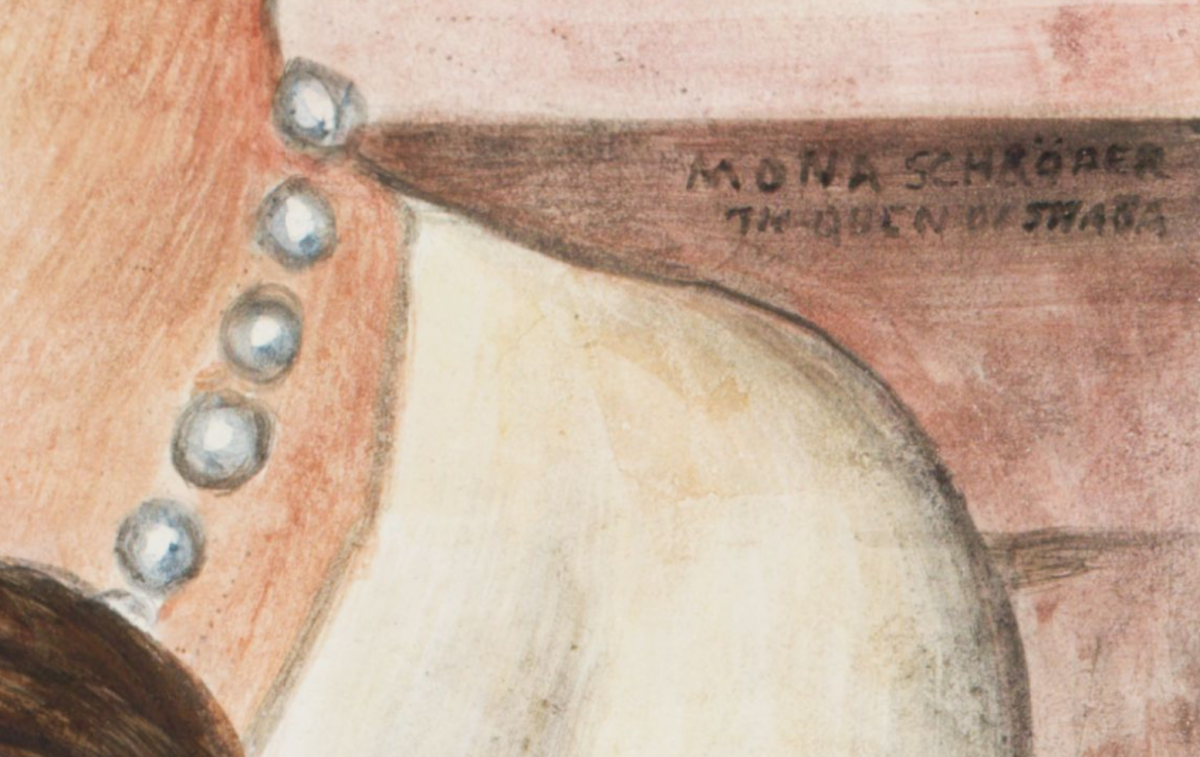 Another concrete benefit of the photogrammetry work done by Cultural Heritage Imaging is the support they obtained from Stanford’s Digital Library. The huge mural files are stored there and Artist Rights Society has provided clearances.

Although the files are neot yet available to the public, using Stanford’s new Mirador viewer, I took a peek and found “Mona Schröder” painted onto the balustrade to the right of the image of Mona Hofmann in the mural’s panel 2. (The resolution is stunning compared to the website version of this area.) Under Mona’s maiden name, Rivera inscribed what may be, “The Queen of Sheba.” Since they had been very close, I wonder what the nickname means? [The reclining blond girl painting on the floor in panel 4 is Mona’s daughter, the late Lynn Wagner, who donated her mother’s remaining papers to us.] 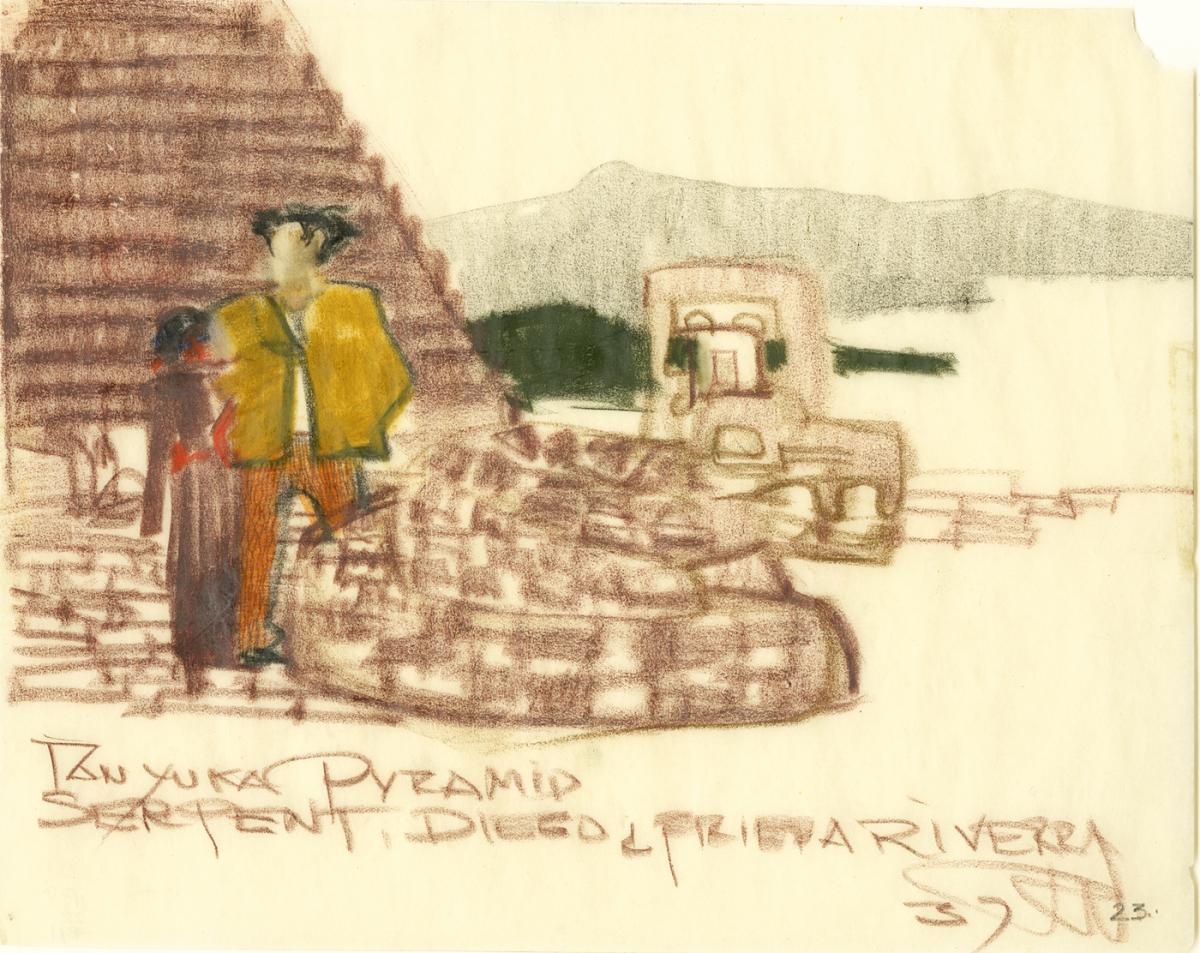 A back burner story jumped to a front burner. Our mural docent Helen Pinto was sleuthing and found this drawing architect Richard Neutra had done of Diego and Frida in México in 1937.

Mona and Arthur Hofmann were clients of the architect in 1937 and their former house in Hillsborough is on the National Register. The Hofmann’s had been introduced to Neutra by Dr. Sidney and Emily Joseph, Bay area Modernist art fans. Sidney was a painter and writer Emily had translated Diego’s talks “on-the-fly” in his 1930-31 stay because Diego didn’t speak English. I’d always thought Mona introduced Diego to Neutra in 1940, but this drawing skewed the chronology. Businessman/photographer Sidney Kahn, who took many pictures of Diego in 1940, had a Neutra house at 66 Calhoun Terrace. A couple of doors down was 42 Calhoun Terrace, among the places Diego stayed. After Trotsky was killed, Diego made sure he was a moving target.

A recent local cause célèbre was the destruction of the historically significant Neutra “Largent  House” (1936) at 49 Hopkins Avenue on Twin Peaks. The precedent it might set is dangerous. The City has ordered the developer to rebuild it. This is another example of artistic legacies in jeopardy.

Richard’s son Raymond Neutra has been extremely helpful sending me photos of germane pages. He told me that his father related in a letter that he went to visit Diego and Frida in the dark to the ominous sound of snarling dogs. Storytellers live for anecdotes like this! We were connected by mutual friend John Crosse, who writes a blog on Southern California Architectural History, including  Richard Neutra. Over the years our overlapping research has made us almost symbiotic. Raymond was able to correct the idea that his father had gone to Mexico in 1925. The consensus was that 1937 was Neutra’s first visit to México. (Likely, Sidney and Emily Joseph provided the introductions.)

A new book, The Tango War, speaks about the little known role of Latin America in WWII. Diego Rivera’s main agenda in painting our mural was to establish Pan-American solidarity in anticipation of the war reaching our shores. After the war, South America became a refuge for many Germans and Italians. México has a long history of receiving refugees.

Don and Kathe Cairns and their church group came on their annual mural visit on February 9th. It’s always a treat to see them and go out to lunch. (FYI: Donald is Emmy Lou Packard’s son and the little boy in the lower center of the mural.)

The Library of Congress Gershwin Prize for Popular Song ceremony will air on PBS May 3. The local Ira and Leonore Gershwin Trust is one of the sponsors. In a nice nod to Latin music; Emilio and Gloria Estefan Honored in Gershwin Prize Tribute Concert.

Had you been invited to the private unveiling of the mural in 1940, here is what you would have received. Wonder who you had to be to get on the “A” list? (Copy of invitation purchased from Alan Wofsy Fine Arts, 1109 Geary, SF, 94109 using your donations to the Foundation of CCSF (Diego Rivera mural).  John Crosse alerted me to this opportunity.) 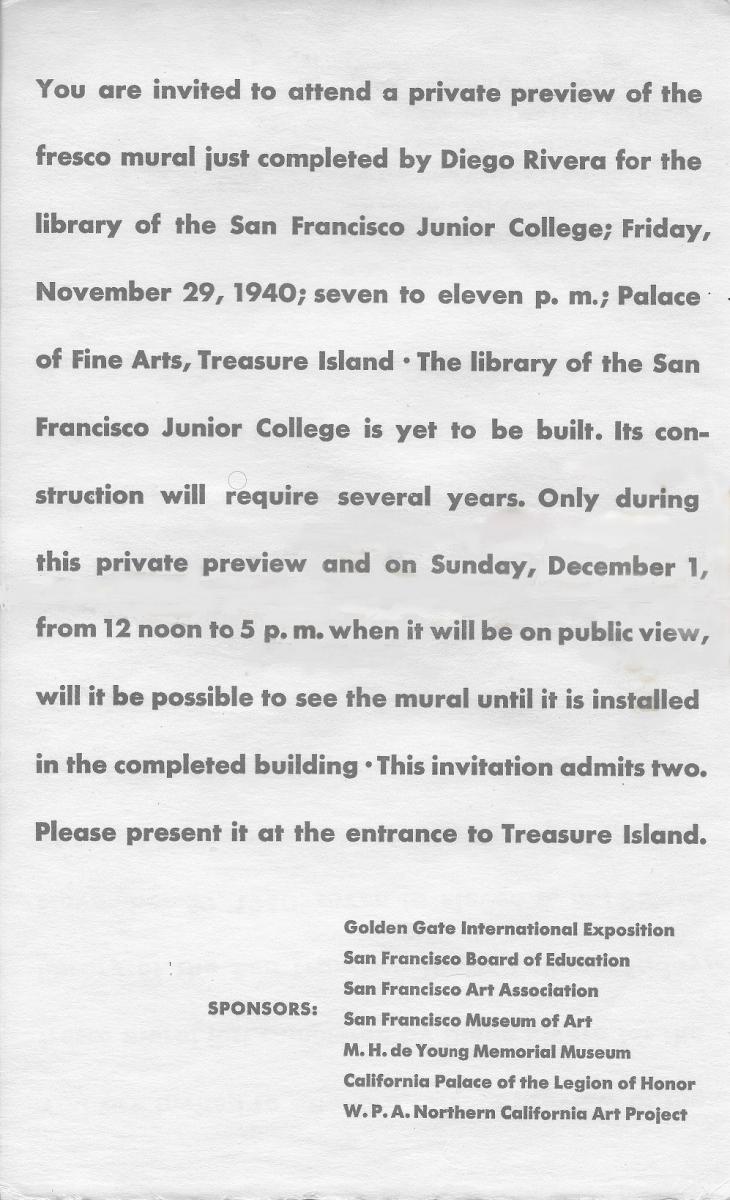