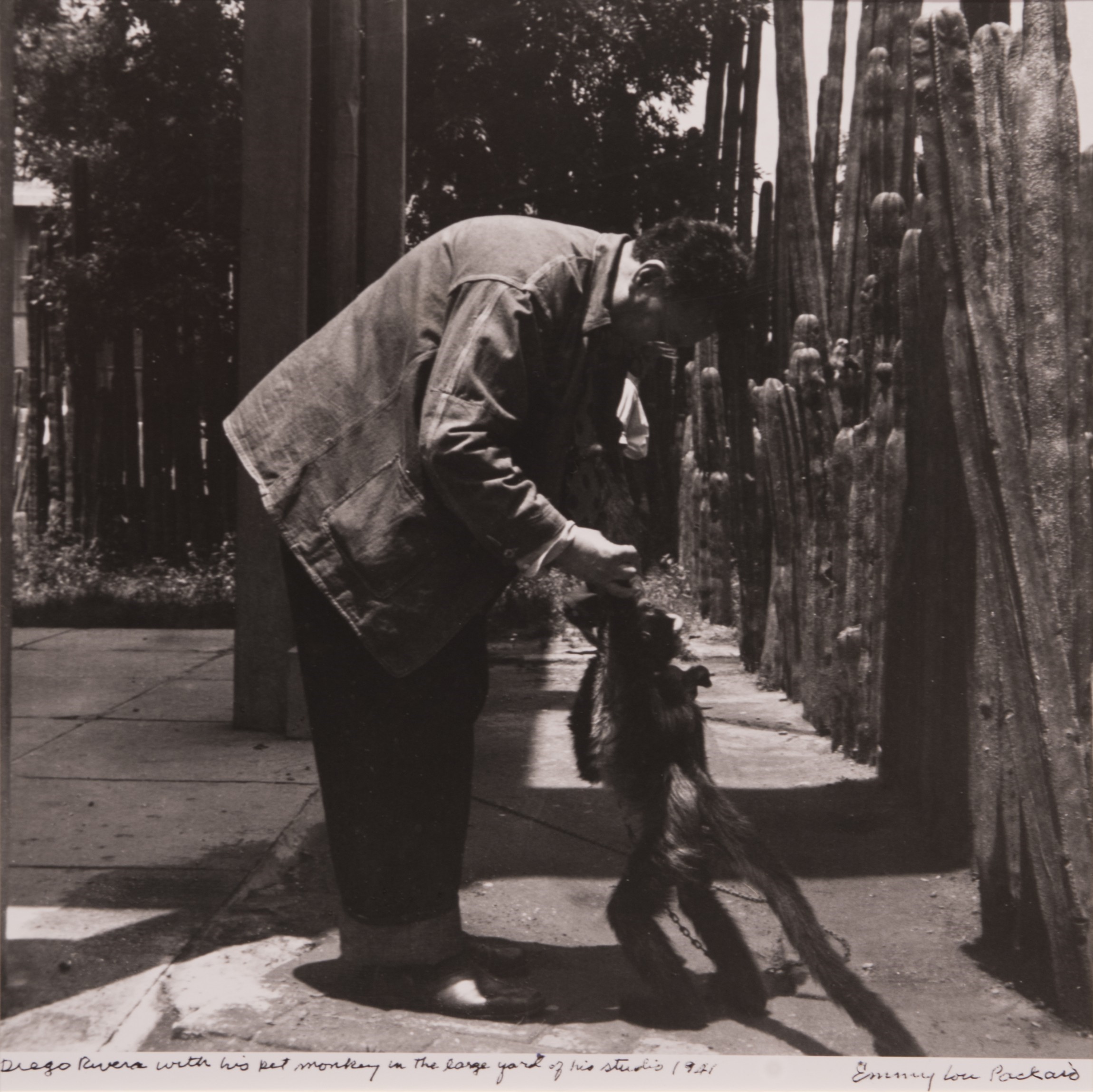 Photo: Emmy Lou Packard, 1941, Diego with Monkey at the Casa-Estudio

The Emmy Lou Packard: Artist of Conscience exhibition opening reception is on Saturday, June 18, 2pm-4pm at the Richmond Art Center. Come on out and join the festivities! The exhibition runs June 22 – August 20, 2022, with many other events. It is co-curated by Robbin Légère Henderson and Rick Tejada-Flores (Rivera in America, Orozco: Man of Fire).

Emmy Lou Packard became the great benefactor to our Diego Rivera Mural Project many years ago, when her family, Donald and Kathé Cairns, shared her copious research with us. (Emmy Lou’s son Donald is the boy in the white t-shirt in the lower center of the mural.) Her work and the Timothy Pflueger papers became the foundation for all the investigations that have followed. Emmy Lou acted as Diego’s primary assistant and secretary on Pan American Unity. At the start of 1941 she and her father returned to México with Diego, and she spent most of the rest of the year with Diego and Frida. Her unique first-person insights and her later work developing a book on Diego Rivera in San Francisco have been priceless. [BTW The man in the green vest depicted behind her in the mural, has remained a mystery to us. It’s not Frank Lloyd Wright. Our last best-guess is that it may be Victor Fleming, director of 1939’s Gone with the Wind and The Wizard of Oz.] 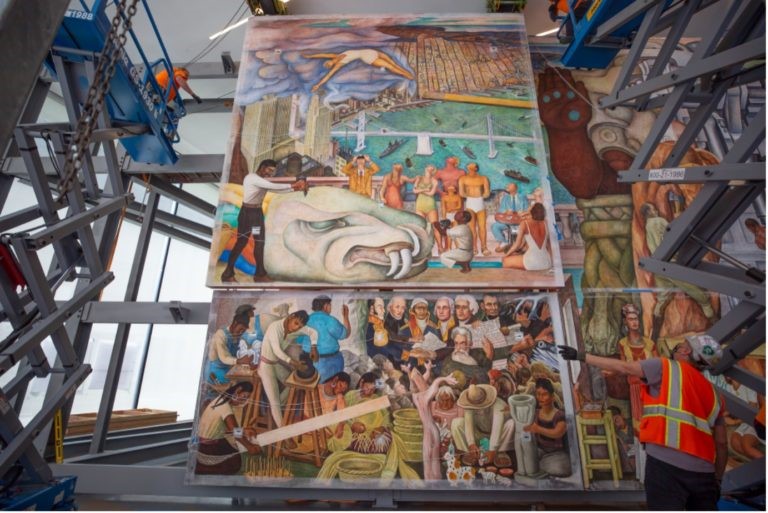 Diego Rivera: Moving of a Masterpiece, the documentary about relocating Pan American Unity to SFMOMA, has just won a San Francisco/Northern California Emmy in the “Arts/Entertainment – News or Long Form Content” category. This documentary captures 5 years of work in a precise 24 minutes. Congratulations to the stellar film crew!:

Having recently written about Diego Rivera citing Thomas Jefferson’s quote “The Tree of Liberty must be refreshed from time to time with the blood of patriots and tyrants,” here is a more sobering note on President Jefferson. In a secret letter to Congress Jefferson proposed driving the Native Americans into debt as a means of obtaining their land. The issue of Indian schools in government policy was all part of a plan of “assimilation”…of their land. There is a paucity of indigenous people on the far-right side of our mural, Diego’s subtle comment on US policy. 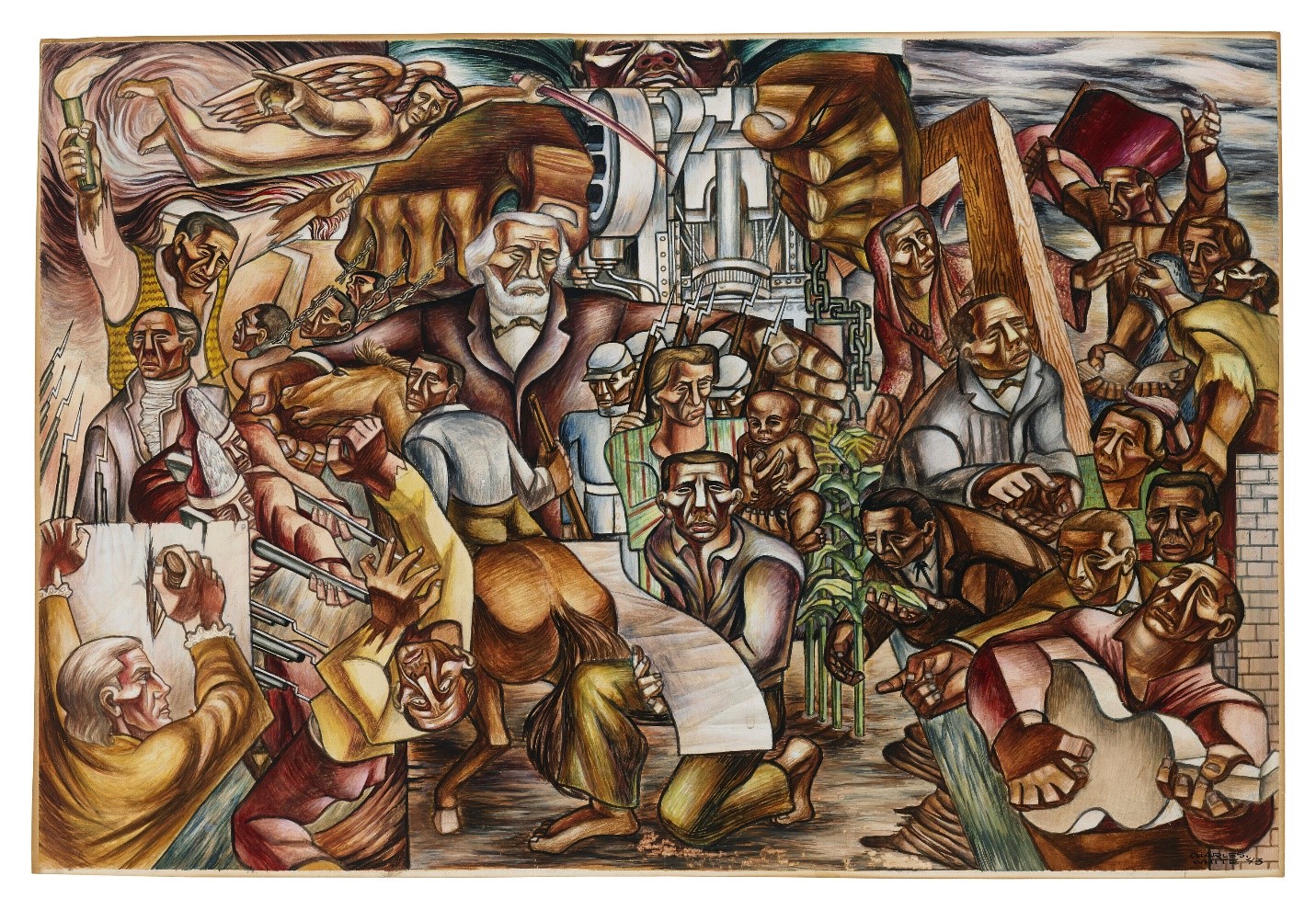 A study for The Contribution of the Negro  to Democracy in America by Charles White (1918-1979) (christies.com)

This study in which Charles White tried to include missing parts of our history recently came up for sale at Christies. The adjoining essay (in link above) remarked on the study being evocative of Pan American Unity. White was married to Elizabeth Catlett (m. 1941–1946), whom I mentioned last issue, at the time this study was done. Very early in her career, Catlett’s work at the Public Works of Art Project exposed her to the art of Diego Rivera and Miguel Covarrubias. She ended up in México.

At the suggestion of Lope Yap, Jr., I recently watched the PBS American Masters’ Tyrus Wong documentary while researching Rivera’s assistant Peter Lowe. Wong’s travails as a Chinese artist in LA exemplifies why our National Narrative must be “refreshed.” Some current agendas can only be advanced with a complete ignorance or disregard for how we really got here. The California Historical Society has a powerful calendar of lectures and events to alleviate some of the holes in the historical record.

In the idiosyncratic year 1940 we were the only major player still not in the fray. The times were strange. As a nation we had the luxury of only debating about the war. Rivera was adamant that the US would determine the outcome of the war, regardless of which side we backed. A year after WWII commenced in Europe, the America First Committee was formed on September 4, 1940. It was an umbrella isolationist group, which included pro-Nazi and pro-communist factions, advocating against US entry into the war. (The group disbanded after Pearl Harbor and Hitler, Japan’s ally, declaring war on us.) In México, the Ukrainian Leon Trotsky knew that “Stalinist Justice” was awaiting him. The only question was from where the attack would come? With Stalin and Hitler on the same side, the threat could come from anywhere. The first attempt on May 24 sent Rivera into hiding. A good indication of the tumult of the times is that Diego Rivera was at first thought to possibly be complicit in this attempt (it was Siqueiros!) and, also, the FBI thought Rivera was a likely next target. In our mural the cultivated actor Edward G. Robinson, who invariably played a thug, played an FBI agent in the scene from Confessions of a Nazi Spy. Charlie Chaplin bowed to the times and was making his first “Talking” movie. High on the scaffolding painting, Rivera was armed to the teeth, his definition of Art in Action.

As Diego dug into his bag of tricks to invent his masterpiece, sometimes the connections became very esoteric. The Severed Hand in lower panel 4 might refer to Salvador Dali and Luis Buñuel’s Un Chien Andalou (1929), the first surrealistic film. There’s a scene where a policeman pokes at a severed hand with a stick. As part of Spain’s Republican government, Luis Buñuel fled when his side lost. He ended up in Hollywood writing uncredited gags for Charlie Chaplin’s The Great Dictator. Diego might have met Buñuel when he went down to LA on his first weekend in California. At the time, Dictator co-star Paulette Goddard gave Diego movie publicity stills, which he used in the mural. However, though Rivera might want to acknowledge Buñuel, he didn’t want to “out” him to potential assassins. 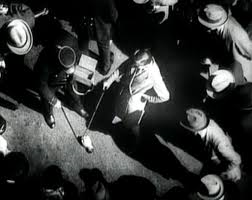 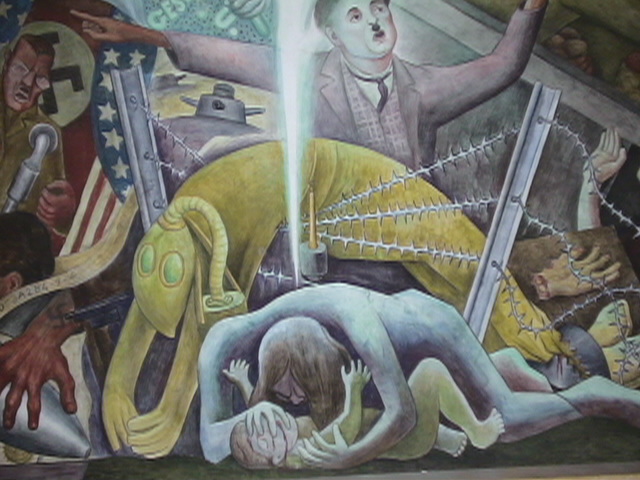 Our late friend Robert Seward did an extensive study of the Masonic imagery in our mural. He would call and regale me with the connections he had discovered. Unfortunately, he did not have the opportunity to get them recorded. Having done research myself, Masonic symbols keep popping up. 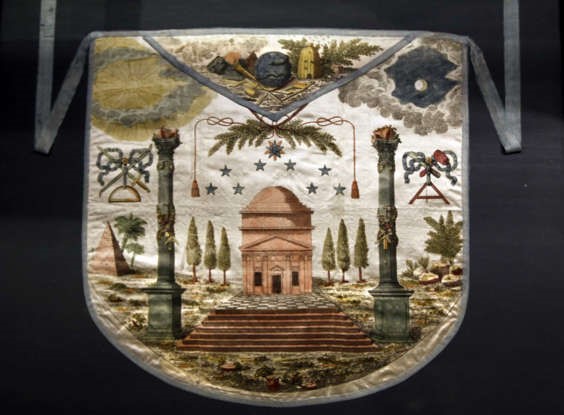 The image above almost serves as a schematic for the symmetry of the mural’s two columns on the extreme ends and the center icon.  (A recent mural visitor from Nevada City, up north in the Gold Country, explained to me that the large wooden screw on the mural’s right side is most likely for compressing bales of hay to feed the horses pulling wagons out in the boonies.) The all-seeing eye appears in the half face-half skull in the center. The worker in panel 4 is coming up what might approximate “Jacob’s Ladder.” I wonder if Diego included these images to please architect Timothy Pflueger, a Mason. Diego’s father was a 33rd degree Mason, but later while trying to get re-admitted to the communist party, Diego in a “Biblical” moment would repeatedly deny he’d ever been a Mason. In our mural among the Masons is an apron-clad Samuel Morse signaling with his right hand: “I am a Master Maker Mason,” Robert Fulton (a NY Lodge was named after him), Henry Ford, Diego Rivera, Timothy Pflueger, Simón Bolivar, Miguel Hidalgo y Costilla, José María Morelos y Pavon, and George Washington. The Masonic symbols also include: the Broken Column (at the margin of panels 4 & 5), the Globe in Chaplin’s hand, a Bow drill (shaped like a Mason’s level), chisels, hammers, Compass and Square, and the “Tree of Life.” 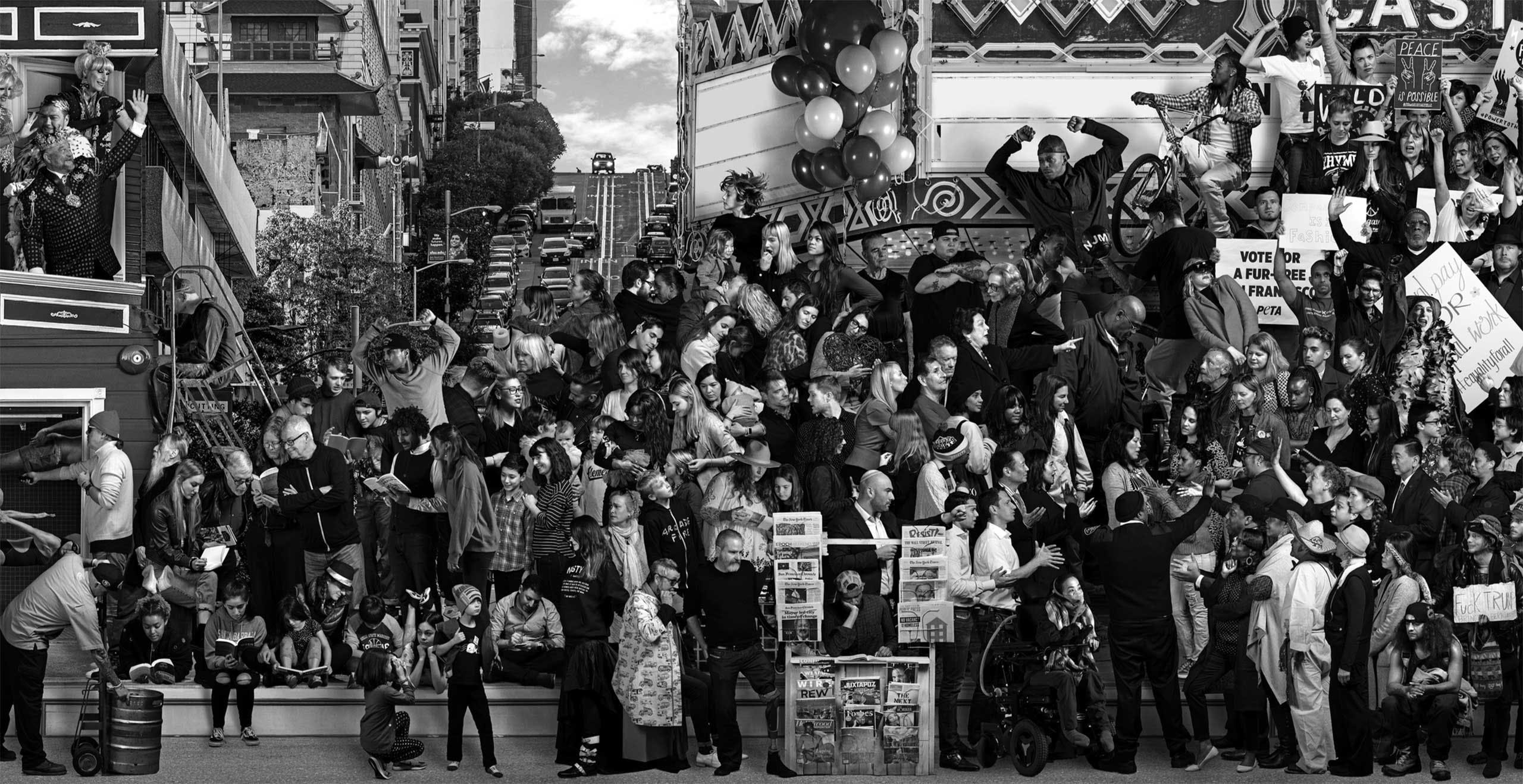 This just in from JR, a new endeavor: The Inside Out Project: “We help communities turn their untold stories into a work of public art.” The good work continues.

It’s been three years since JR’s homage to Diego Rivera, The Chronicles of SF, was installed at SFMOMA. Our mural now occupies the space. (That’s me with the balloons.)

SFAI invited me over to meet Zoya Kocur, the new Diego Rivera Fresco Program manager. It was a wonderful three hour discussion of all kinds of ways we can collaborate. Ms. Zocur‘s vision for the mural certainly resonated with me, especially since the future of the SFAI mural is now assured. These are especially good days for Diego Rivera in San Francisco with SFMOMA’s Diego Rivera’s America opening very soon. The show’s next venue Crystal Bridges was profiled on CBS.

A milestone has been reached in the fight to save the Victor Arnautoff murals at Washington High School (San Francisco). On Tuesday evening, May 24, 2022, at their regularly scheduled bi-weekly meeting, the SF Board of Education formally voted, 4 to 2 to withdraw their appeal in George Washington High School Alumni Association (GWHSAA) v. SFUSD.  We owe a debt of gratitude to all who stepped up to stave off the obliteration of the frescos. Hopefully, next steps can protect the mural’s future. It’s evocative of when Detroit Auto Workers Defended a Diego Rivera Mural. Recently, I got energized by the story of Cornelia and Irving Sussman, a generous couple with a Bay-area connection. Even small groups can do wondrous things.

The 3rd grade mural visitors were a joy.  It seems to me no student should graduate from SF Bay-area schools without having seen our mural. It’s a gateway to a bigger world and an example of the wondrous things to be found just over the horizon. Extrapolating conservatively from SFMOMA attendance figures, I figure 100,000 visitors have seen the mural in the past year. However, the mural’s future is still a big question mark.