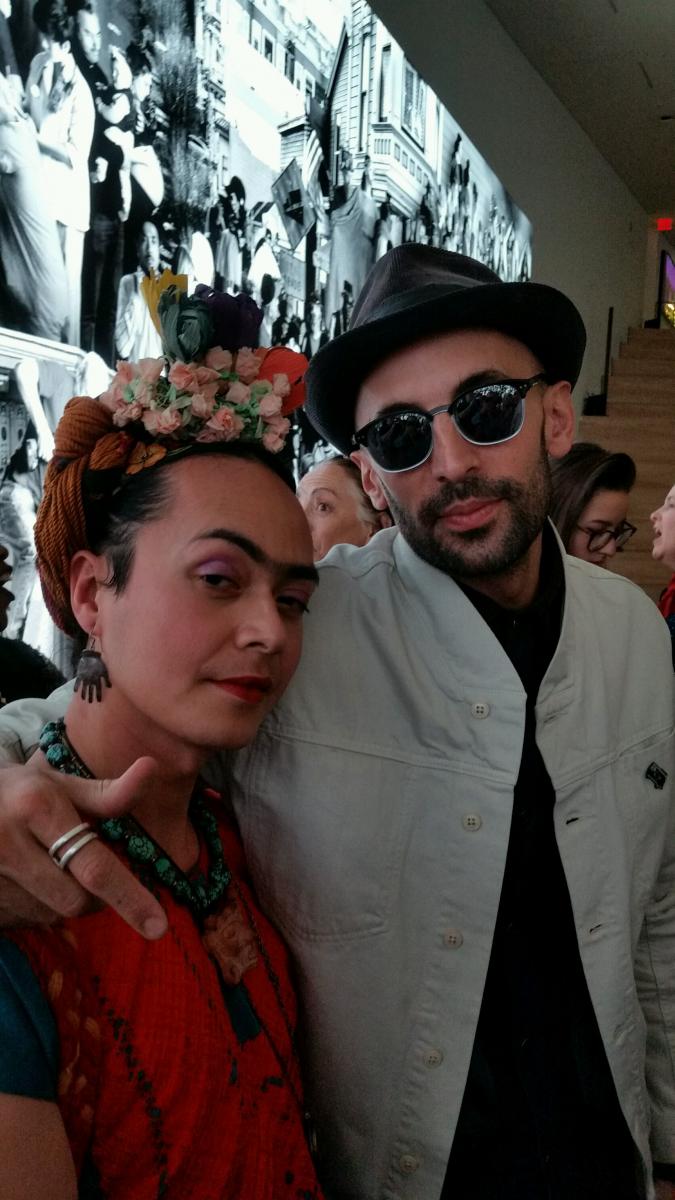 JR’s Chronicles of San Francisco got a splendid unveiling at SFMOMA’s Roberts Family Gallery with many of the 1200 figures in the mural present. JR’s homage to Diego Rivera features a video of the French artist with his back to the audience, like Rivera in our mural, brushing on paste to “hang” photographic images. Bathing suited women allude to the swimmers in our mural, who look up at the diver, momentarily suspended in space…forever. Last year Time magazine designated JR one of the hundred most influential people in the world. In the June 3, 2019 Time issue, Chronicles of San Francisco is profiled.  The museum has invited me to speak on Aug. 9 as part of Gallery Talks. The Roberts Family Gallery is free to the public and will feature our mural as part of an extensive Diego Rivera’s America exhibition in the fall of 2020.

Lots of work is going on at the mural in preparation for the move. The protective railing was taken down and aluminum scaffolding raised. Vertical side trim was removed, exposing edges of the mural unseen since 1961. Contractors removed interior plaster work below the mural and will be boring into the exterior walls to investigate how the mural panels are actually attached. There is always the gap between the architect’s neatly rendered plans and the reality of jockeying not-quite-square, massive steel and plaster panels into position. Since the installation work was poorly documented, we’ve already found some surprises.

NOTE: Due to all the delicate work being done on the mural, it will remain inaccessible to visitors throughout the summer.

Supervised by SFMOMA’s Head of Conservation Michelle Barger, art conservators Kiernan Graves and Anne Rosenthal are minutely assessing the condition of the fresco plaster from atop the scaffolding. Long-time supporter Anne was recently honored for her work restoring the WPA murals at the celebration of the Aquatic Park Bathhouse’s 80th anniversary. Locally, her work also includes Coit Tower, the Beach Chalet, and the other San Francisco Rivera murals.

Florentine conservator Francesca Piqué, whose 1999 mural assessment for the Getty Conservation Institute changed my life, came back to visit after 20 years. She and her conservator colleague, who has worked at the Louvre, commented on the incredible condition, after almost six decades, of the mural’s lower parts (the parts some might deem more susceptible to possible damage). Francesca, who now lives in Switzerland, came to enroll her son in City College! We’re already looking at him as a prospective mural docent. Our docents move on to further their education (you go, Helen and Vickie) and we need to recruit. Everyone is welcome to sign up for the wide variety of classes the College offers and apply to be a docent.

Cultural Heritage Imaging will shoot the previously unseen mural parts to augment their photogrammetric work, a comprehensive 3-D image of the mural’s surface. This work, hosted at Stanford’s Digital Library, will inform the conservators’ work. Old bungalows on the north side of the theatre have been demolished, clearing the path for the murals extrication in about a year. X-ray analysis will reveal any undocumented, embedded metal in the panels.  Spectroscopic analysis of the pigments, fresco plaster and cement substrate is an upcoming task for a visiting Mexican scientific team.

Director Arthur Dunkelman of the Jay I. Kislak Foundation sent along an article about similar analytical work done on Rivera Popol Vuh watercolors by the Library of Congress. All this quantitative data is a benchmark for the future. The LOC recently contacted us to inquire about Rivera intellectual property rights issues. Their website has an interesting article, “Exploring the Early Americas.”

Dualities is a recurring theme in Diego and Frida’s work. Right now in the mural world we are embroiled on the other hand in a fight to save the Victor Arnautoff murals at Washington High School from being whitewashed. An April 11 NYT article on the issue garnered almost 800 comments. I made an “appearance” on KQED’s Forum in April. On April 26 the WSJ had an op-ed piece defending the murals. The Washington Post reported on this as well. As a Diego Rivera investigator, the destroyed “Rockefeller mural” is always the elephant in the room. This issue has invoked responses from Russia, Germany, and the National Coalition Against Censorship, which includes the Directors Guild of America. First Nation support for the mural has been offered in a video by Robert Tamaka Bailey, a Choctaw elder. Professor Dewey Crumpler, who painted a mural in response to previous controversy, offers commentary. We’re hoping a non-destructive solution to the impasse can be devised.

Lope Yap, Jr, VP of the Washington H.S. Alumni Association, sends word that the SFUSD Board will put the GWHS Murals on the Committee Meeting agenda on Tuesday, June 18th – 5:00PM (The Mural issue is first up on the Agenda. 30 Minutes allowed for both sides of the issue.)

On Tuesday, June 25th  there will be a Final Vote, but no Public discussion.

We are encouraged to write messages of opposition to any whitewashing of the murals to: Superintendent Vincent Matthews  and the Board Members.

There will be a free Historic Preservation panel on Beyond the Controversy: The George Washington High School Murals and the Removal of Public Art, Tuesday, July 9 at 7:30 PM at ILWU Local 34 Hall – 801 2nd St. next to Oracle Park, SF. We recently met with filmmakers interested in doing a segment on the issue as part of a documentary on WPA murals.

Bird Levy sends word that her annual Pasion de Frida exhibit will open Tuesday, July 9, 5-8 pm @ at Puerto Alegre at 546 Valencia Street. Has a recording of Frida’s voice been found? Some think not.

The first two figures Rivera wanted to include in our mural were Robert Fulton, inventor of a working steamboat, and Samuel Morse, inventor of the telegraph and Morse code. Now celebrating their 175th anniversary, these two Morse inventions obliterated time by making messaging almost instantaneous; more akin to text messaging than transporting messages on horseback. Rivera loved that these great inventors were painters, who reconciled Art and Science.

The Discovery Channel came by to film a short segment about Dudley Carter for “Expeditions Unknown” . Host Josh Gates told me that the episode will air next season.

Anne Schnoebelen, vice president of the Treasure Island Museum, sends along a link to an aerial view of Treasure Island, where our mural was created. 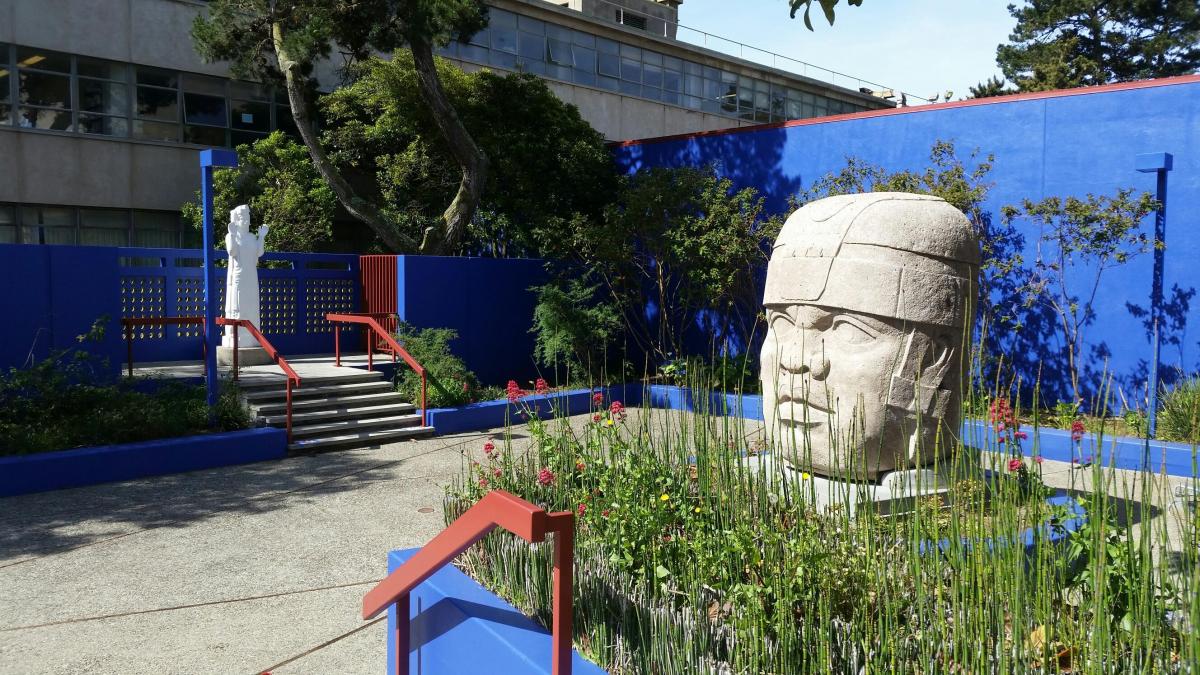 Our Frida Garden’s paint job has been renewed by City College staff. The Pacifica statue and Olmec head were power-washed. A special thank you to VC Kristina Whalen for nursing that project along. She is moving on from the College, but very much left a legacy in helping organize the Diego Rivera Mural Project by establishing protocols in the seven years since I “retired.”

We look forward to an upcoming visit by new Mexican Consul General Remedios Gómez Arnau to renew our joint commitment to the mural as elucidated in our 2011 MOU.

The mural is on a long journey through time and we’re hitching a ride for a few decades.