Bay Area Locals!  On June 17, 2018 at 3 pm, Dra. Guadalupe Rivera Marin, Diego’s daughter, will give a talk in honor of Father’s Day, Un Río, Dos Riveras at Brava for Women in the Arts on 24th Street in the Mission.

Our collaboration with SFMOMA is picking up steam. Our CCSF Education team was hosted at a museum open house. A cohort of SFMOMA staff came out to see the mural and we’ve booked another visit with more staff. Curator Caitlin Haskell graciously invited Dean Kristina Whalen and me to the opening party for the unique René Magritte: The Fifth Season exhibition. Caitlin is moving to the Art Institute of Chicago and we will certainly miss her on this Rivera project.

May 29-31 we started exploring inside the wall below the mural to confirm that the building plans accurately reflected the mural anchorage. Ouch, they didn’t. Locations, where the mural was to be bolted to its lower support, were welded. An unused bolt had been left behind. Externally, electro-magnetic probing helped explore strategies to release the mural from metal rods tying it to the wall. The lobby was bursting with world-class curatorial, conservation, and engineering talent using light meters, temperature/moisture sensors, borescopes, and very sensitive ears and fingers. At the invitation of SFMOMA’s staff, Sandra Zetina Ocana, an UNAM art historian/conservator with expertise in Rivera, flew in from México for several days. Conservator Kiernan Graves, experienced with Rivera’s portable frescoes, flew in from L.A. for the day. Sometimes, dreams come true.

Doing Rivera research is like solving a jigsaw puzzle, albeit one in which the final image is a mystery. A new piece of information is coddled into a niche, where it sweetens that story. There’s lots of empty space. In Spanish, jigsaw puzzle is rompecabezas, literally “break heads.” This aptly describes the feeling when pieces elude us; like the exact date of Frida’s late May 1931 return to Mexico. The SFAI’s Jeff Gunderson, librarian & archivist, just sent me a copy of a press release dated May 12, 1931 about a party Frida had attended the night before. We’re zeroing in.

The first of last month’s Rivera murals (all three) tours for the Mexican Consulate included two couples who had just heard me do a presentation for the California Historical Society the previous Saturday. Ron sent me a link to his take on the tour, which started with a City Club lunch with the Consul General and ended 5 hours later with my analysis of Frida’s wedding portrait at SFMOMA.

On the second tour, the Mexican Consulate’s Itziar Mondragón pointed out to me a striking similarity between the tree stump in Allegory of California and an image of the árbol quebrado (broken tree) from the Códice Boturini, which documents the 200 year peregrination of the Mexica (Aztecs) from Aztlan to Tenochtitlan (Mexico City). This was definitely a jigsaw puzzle piece. 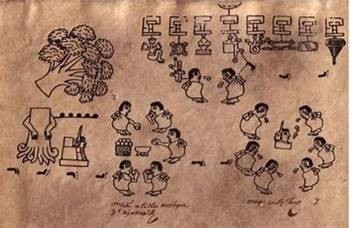 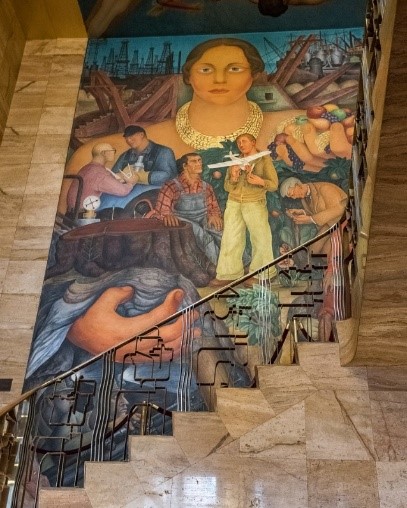 Rivera immersed himself in pre-Columbian artifacts and incorporated the motifs in his murals. He drove Frida crazy with his compulsive buying. He may have been an easy mark for counterfeiters. Some pieces in Anahuacalli, his museum, may not stand up to scrutiny; a failing of some of Rivera’s fabulous stories, as well.

As the Ira and Leonore Gershwin Trust in San Francisco transfers its collection to the Library of Congress, their archivist Michael Owen (CCSF Library program graduate) invited me to pick up a couple of books he had set aside for me. Michael mentioned that the books might have originally been from George’s library.  The 1940 MoMA exhibition Twenty Centuries of Mexican Art catalog clearly belonged to Ira because George died in 1937. But Miguel Covarrubias’s The Prince of Wales and other famous Americans (1925) includes a caricature of George (below) and was most likely his. Having been so involved in the George Gershwin play over the last few years, there’s an eerie poignancy in cradling a book once held by hands that played Porgy and Bess. It’s quite a singular thrill. 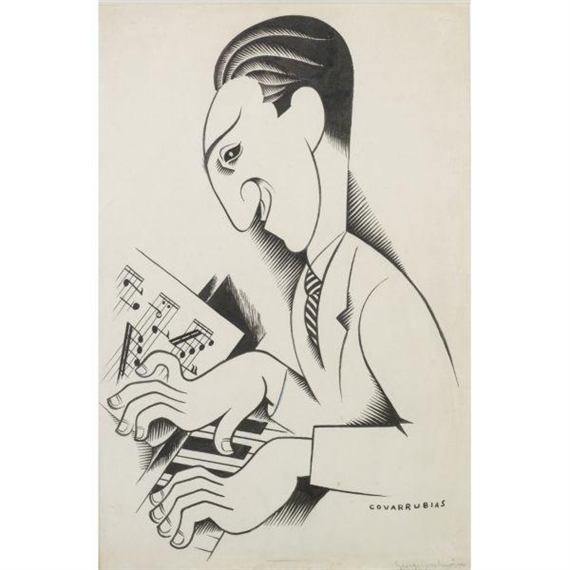 We were recently contacted by Dr. Caroline Zilboorg, who is writing a bio of her father Dr. Gregory Zilboorg, George Gershwin’s psychiatrist. He accompanied George to Mexico and per differing accounts was brilliant or manipulative (like speaking Spanish to some of their Mexican contacts to exclude Gershwin).

Diego Rivera’s The Rivals (approximately 4’ x 5’) sold on May 9, 2018 for $9.76M, a new auction record for Latin American art (Spanish link), surpassing the record held by a Frida painting. It will, hopefully, be part of SFMOMA’s 2020 show Rivera’s America. The value is intriguing because “comparables” for our Rivera mural were used to compute a replacement value for insurance purposes.

Have a correspondence with the seller of the Hermes Pan portrait by Diego Rivera. He found our last missive interesting.

Came across an article on Luther Burbank that had an image of prints he made from cross sections of fruits. Wonder if Frida saw these in December 1930 at his house in Santa Rosa? She later used her lip prints as a “signature” on letters.

Choreographer Annabelle Lopez Ochoa, whom I mentioned in the last FOD missive, garnered very nice reviews for her Guernica at the SF Ballet.

My buddy Frank Koehler gave me a pristine copy of Art in America, Feb. 1986 with an article about artist Lucienne Bloch. She was a dear friend to Frida and an assistant to Diego at the Detroit Institute of Arts and at Rockefeller Center.

Anne Schnoebelen invited me to a Treasure Island round table lunch at the City Club. I’ve spent so much time there this year, I should get an honorary membership. Things are looking up for Anne and our friends at the Treasure Island Museum Association. I will speak there next year.

Sadly, we have to report that René Yañez has passed away. The long-time Mission district artist was an inspiration to many.

Third graders have become my favorite tour of the year. They studied one panel a week for the 5 weeks prior to their visit. They were enthusiastic, polite, and knowledgeable. I can’t say enough good things about their teacher, who visited last year while working at a different school. Let’s just clone Amy!

On June 26 at 7:30 I will present Frida Kahlo, Diego Rivera, & San Francisco: A Love Affair for the San Francisco History Association at Congregation Sherith Israel.