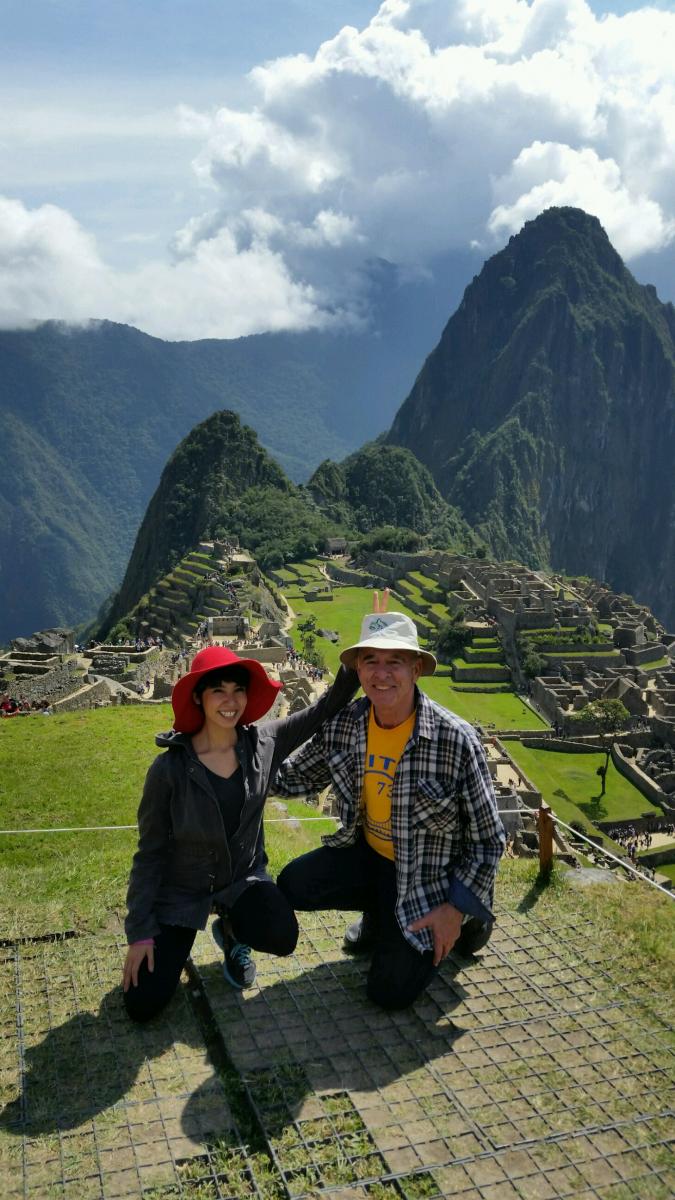 Just got home from celebrating the Winter Solstice at Machu Picchu, Perú with my niece Verónica Maynez. She graduated from Cal and is off to DePaul for grad school. My self-serving graduation present was one of the joys of my life. 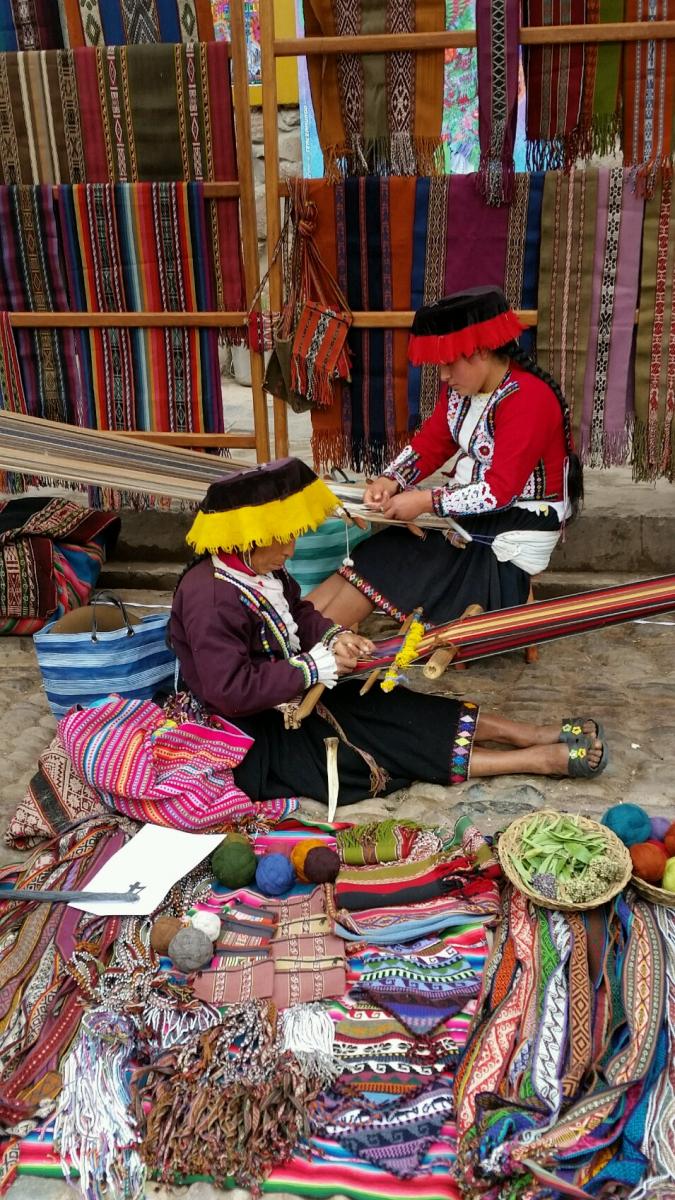 A favorite find was the Back strap loom weavers of Pisac, similar to those Mexican ones depicted in our mural (panels 1 and 2). There is 3000 miles distance between the two sites, demonstrating how big ideas, such as the Golden Rectangle, can be conceived independently in disparate places on the globe. The scale of the Incan empire was a breathtaking 32° of latitude, unprecedented in the world at the time. Cusco’s over 11,000 foot altitude was also breathtaking-literally. Relief came from a basket of coca leaves at the airport and coca leaf tea served at all the hotels.

Coming home in March for a rest after the flurry of connections in Mexico City (Vernal Equinox at Teotihuacán), didn’t work out as I expected. The serendipitous nature of the Rivera research was demonstrated a week after my return when at a Mexican Museum art opening I met gallery owner Robert McDonald. He related the story of a Dude Ranch in Pleasanton, California, which once had a large Rivera painting hanging over the bar! 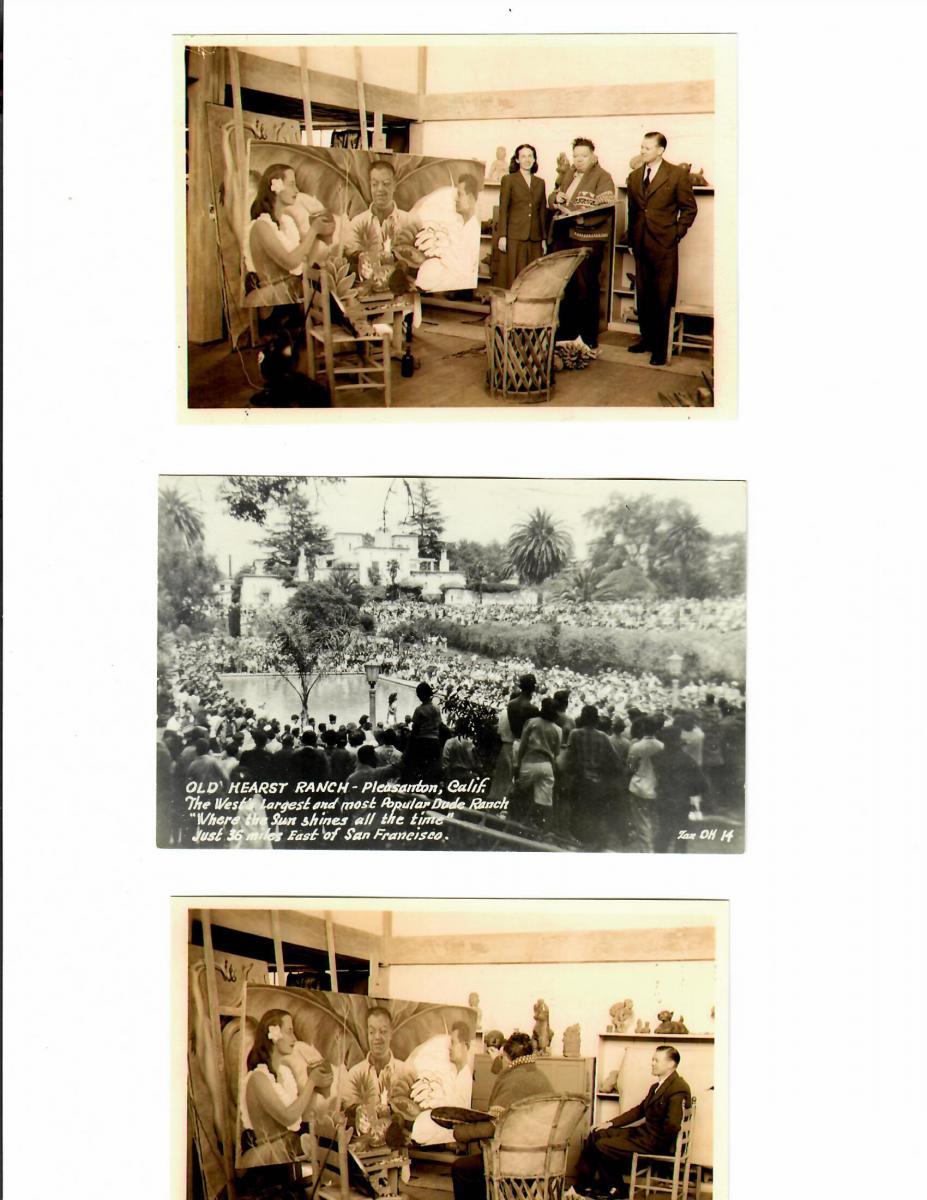 In 1944 John Albert Marshall II and his wife Edith went to Diego Rivera’s Casa-Estudio in San Ángel to have their portraits painted for their Dude Ranch’s main building, formerly Phoebe Hearst’s hacienda on The Old Hearst Ranch. (Since the Dude Ranch opened in 1940, the Marshall’s may have met Rivera while he was working on our mural at Treasure Island. The Ranch is now the Castlewood CC, though the hacienda burned down in 1969.) The triple portrait sold at Christie’s in 1999. We’re trying to track it down. In this video Robert demonstrates how Rivera art research can happen.

Robert also generously shared images of a 1930 Rivera portrait of Rosa (Covarrubias) Rolando with Diego’s very affectionate inscription on the verso. As related last time I’m working on finding the exact date of Frida’s 1931 return to Mexico from San Francisco. (The Mexican Consulate is locating a Ministry of Immigration contact for my November visit to Mexico). Though still in Europe, most likely Rosa was instrumental in brokering the significant 1931 Frida-Nick Muray encounter. What motivated Rosa? Did Diego come on too strong?

Prior to going to Mexico (March FOD newsletter), my traveling companion Carl Nagin asked me if I’d read Juan Rulfo. This was a big gap in my education. I read Rulfo’s Pedro Paramo and short story collection El Llano en Llamas (The Burning Plain). Luminaries like Gabriel Garcia Marquez and Carlos Fuentes credit him with creating magical realism. Very much like learning a new word, the name “Juan Rulfo” kept coming up in Mexico. Flying home my seatmate, filmmaker Ben Guez, told me of his film Valentina, which was a Rulfo-esque vignette. As Ben’s guest, I saw it at the SF International Film Festival. Recently at Berkeley’s Pacific Film Archives, the Bay Area Book Festival in conjunction with the Mexican Consulate had two films about Rulfo by his son Juan Carlos Rulfo. A panel discussion by Mexican authors followed the next day.

Then, Carl Nagin startled me with the revelation that Diego Rivera had painted a portrait in the late 1930’s of Caridad Mercader, the mother of Trotsky’s assassin, Ramon Mercader. This bit of trivia in Freud’s Mexico by Rubén Gallo suggests that Caridad and Diego may have even been lovers. Was this the first Stalinist foray to infiltrate or reconnoiter Trotsky’s inner circle? Carl is following up on this as part of a rework of his treatise on Rivera and Trotsky, which I anxiously await.

At the DeYoung’s focus group gathering for their upcoming Teotihuacán: City of Water, City of Fire show, I ran into printmaker Emmanuel Montoya. As a City College student Emmanuel had worked with Dudley Carter in 1983, when the Canadian artist restored his Ram sculpture, featured in our mural. Emmanuel is generously furnishing photos for the Dudley Carter page to be created on our website. The printmaker’s Dudley Carter papers & photos are housed at UC Berkeley’s Bancroft Library (BANC MSS 2016/204, BANC PIC 2016.112).

Later while at the DeYoung to hear the show curator Matthew Robb lecture on Teotihuacán, I was approached by the ex-minister of culture of Mexico about participating in an August 2017 gathering of Mexican art scholars.

Stopped by to see my friend, also retired Physics Department colleague, Frank Koehler (he and I were born on the same day). Designing lasers for a living, he taught Physics part-time for many years. His hobby is art, especially pre-Columbian art. Among his treasures is a precious preparatory Rivera drawing for the Clinic of Dr. Jean Louis Faure (Study for La Operación) [This is a link at the Mary-Anne Martin Gallery to a later version of the drawing with construction lines removed]. As I work on Rivera’s mural design chronology, Frank’s drawing is very attractive because it shows Rivera’s layout framework using “Dynamic Symmetry”. This lattice supports the images Rivera uses in any given work and I am reconstructing the layout for our mural. In example drawings Lucienne Bloch documented the lattice for Rivera’s San Francisco Art Institute The Making of a Fresco Showing the Building of a City for Emmy Lou Packard’s use (we have copies in CCSF’s Rivera Collection).

Frank resolved another long time question that I had posed to him on a previous visit.  He found the attribution to finally allow us to state without reservations that the bas-reliefs of athletes on Pflueger’s original City College gyms were done by Sargent Johnson [per CCSF’s late historian, Austin White’s “From Dream to Reality”]. When the gyms were torn down, we had these pieces cut out of the thick concrete walls and saved. Now we need to find them a new home on campus.

In quickly perusing Emmy Lou’s papers again after more than a decade and a half, it seems answers to some of my questions have been available.  I just didn’t know enough to appreciate them when I first saw them. In an interview Dudley Carter confirmed that the Indian in the far right is turning a “lathe”. The identification of “Frank Lloyd Wright”– even Emmy Lou Packard didn’t know- could not be confirmed by Carter. So how did the figure behind Emmy Lou incorrectly become “Frank Lloyd Wright”? This demonstrates how inaccuracies propagate through time; an issue I recently addressed with a Dublin Times editor about an article they did.

“In going through some of Ira’s letters… I came across one from the director Herbert Kline about a documentary he made in 1971 called Walls of Fire about Rivera, Orozco & Siqueiros. According to the letter, the film contains footage of the ‘George Gershwin in a Concert Hall’ painting [by Siqueiros] when it was located in the pool room at Ira’s house in Beverly Hills.” (I tried the Pacific Film Archives to no avail. Does anyone know where we can get a copy of this documentary?)

The Tim Pflueger papers are now posted on our website with the permission of the Bancroft. Also posted is an AAA Interview with Emmy Lou Packard. Both have finding aids.

Here is a link to the spring issue of the Living New Deal  and our friend Harvey L. Smith’s book Berkeley and the New Deal.

May you all have a wonderful verano.