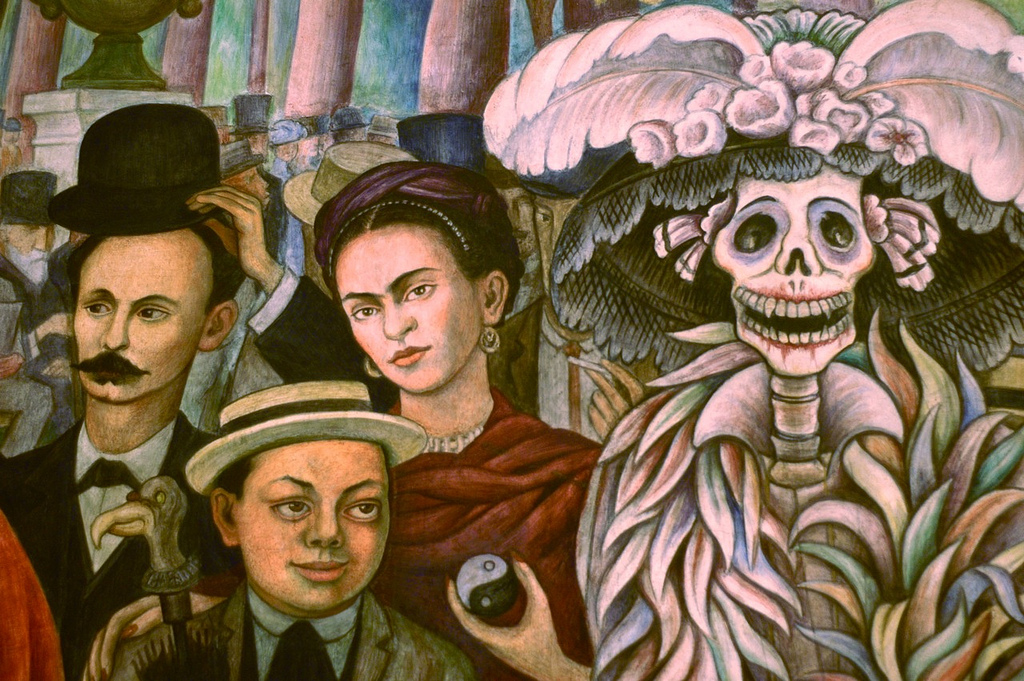 Diego and Frida subscribed to the concept of Dualidades (dualities), the necessity of the Other. There are numerous examples in their oeuvres, including an overt depiction of the Yin-Yang symbol. An apt metaphor is that Frida and Diego were Binary stars coupled by a profound gravity, which compelled them to revolve around each other as they etched a trajectory across their cosmos. Their forces of attraction were equal and opposite. Clearly, the forces binding them exceeded the forces threatening to spiral them off in disparate directions.  They were each other’s Other. Most people of color have experienced being identified as the “Other”, but not in the sense of being a complementary part of an integrated whole. Black Lives Matter is the latest reaction to this experience. Now, it does seem like more people are listening. Have we finally reached a critical mass to make the movement sustainable? The colorful sidewalk messages in chalk and the hand-drawn signs in the windows give me hope.

As James Oles, curator of SFMOMA’s upcoming Diego Rivera’s America, is getting ready to celebrate the prodigious output of the Mexican artist; here in San Francisco the next controversy over the life of a New Deal era fresco has sprung up. Bernard Zakheim’s History of Medicine in California at UCSF’s Parnassus Campus is being threatened with demolition, though not from its content as is the case with Victor Arnautoff’s Washington High School murals. In the case of Zakheim’s murals, it has to do with their being an impediment to construction and with the perceived cost to relocate them. Hopefully, a mutually beneficial solution can be negotiated. Professor Oles recently appeared in a Town Hall webcast, which focused on the destruction in 1934 of Diego Rivera’s  Man at the Crossroads at the brand new Rockefeller Center. (Ironically, because of the foot traffic in what is now the main lobby of “30 Rock”,  30 Rockefeller Plaza, this would have been his best-known work.) A largely unresolved question is why that mural  wasn’t saved, though there existed the technology and a viable alternative venue?

During the webcast, it occurred to me that it was Diego who was the Man at the Crossroads. His stance in refusing to remove a portrait of Lenin led to his dismissal from the uncompleted mural project in 1933, though he was paid in full. Immediately, he lost an upcoming contract to paint a mural for General Motors at the Chicago’s World Fair. Rivera’s hardline attitude, perhaps due to a poor assessment of his standing, came with a price. He would be without contracts in the US until 1940 when San Francisco architect Timothy Pflueger invited him to paint Pan American Unity at the Golden Gate International Exposition. What might have happened in those seven years down a road not taken?

Using the Rockefeller mural money, Rivera painted Portrait of America, a series of portable panels at the Trotskyist New Workers School in NYC. Unconstrained by a patron, Rivera depicted warmongering, discrimination, lynching, and the police in their role as maintainers of the status quo. As Oles pointed out, Rivera was calling our country out. These problems are still unresolved 87 years later. Only 8 of the original 21 Portrait of America panels still exist, many destroyed in a fire. It raises the question of whether having detailed images can be a substitute for the real art work, as proponents of the demolition of the San Francisco murals have suggested. In 1934 Rivera reconceived Man at the Crossroads at a slightly smaller scale as Man, Controller of the Universe at the Palacio de Bellas Artes in Mexico City. This is an atypical work-around; the original artist copied the piece, specifically for a new home. Google has collaborated with the Royal Academy to make a high-resolution copy of a copy of DaVinci’s Last Supper.  Having been to the air-locked space in Milan where the original is housed; a rich, time-shifting ambiance is lost if you’re not in the “space” Leonardo inhabited. Currently, there is discussion about whether Frida’s long-lost The Wounded Table (1940) has been found. Or is it a poor copy?

We ourselves are “copies.” All the cells which comprise us, are completely changed over every seven to ten years. Which leads invariably to the question, “Where does consciousness reside in this fluid convocation of star-stuff”? “Where is the ‘me’”?

Some conservators ask, if an artwork is site-specific, has it been “saved” if it’s moved to a diminished setting? An example they offer is the controversy over the  Piazzoni murals, which were moved from the old San Francisco City Library to the DeYoung Museum. Rivera considered murals to be architectural elements, like at the Detroit Institute of Arts. So he might aver that they’re all site-specific (with the exception of “portable” murals). However, the Dream of a Sunday Afternoon in the Central Alameda was moved across the street from a seismically compromised Hotel del Prado to a fine new home at the Museo Mural Diego Rivera. Our Pan American Unity mural was never installed (thankfully) in the originally designated venue, a grand library at City College. The mural was to be placed so high that it could not be truly appreciated. But, as Diego also said about painting a mural: “You choose the wall, or take what is offered without a choice in the matter.” Our mural will come back from SFMOMA to a new home at City College, specifically designed to give the viewer a more expansive experience, as Rivera had envisioned.

At the San Francisco Art Institute conservator Molly Lambert and her crew have finished restoring the Olmsted mural and it “looks terrific”. They’re forging ahead with another “lost” fresco.

Cultural Heritage Imaging was awarded and has started work on an NEH CARES grant to fine tune and polish the photogrammetry imaging of the mural started in 2015. The initial work was funded by the Foundation of City College’s Diego Rivera account, which will also help support this project. This new phase is part of federal salary funding to put organizations back to work. Nationally, CHI was one of only  317 organizations selected.

NEH CARES grants will also enable organizations to prepare buildings, exhibitions, and programs for reopening. The National Willa Cather Center in Nebraska will use an NEH CARES grant to plan for a phased reopening of its historic sites by retraining staff who work closely with visitors, and creating outdoor interpretation spaces to support self-guided tours. Another grant will enable completion of a 3D digital model of Diego Rivera’s monumental 1940 Pan American Unity fresco to make the 74-foot work in San Francisco accessible to viewers across the globe. Additional grants will support staff positions at Shaker Village of Pleasant Hill in Kentucky, and smartphone tours at the Enfield Shaker Museum in New Hampshire.

All the data gleaned last summer by the SFMOMA art conservation team will be integrated into the existing photogrammetry files, including the mapping of the “giornata,” each day’s work. This will complete a precise digital benchmark of the mural’s condition in 2020, prior to the move to the museum. (Eighty years ago, Diego was still designing the mural, unveiling the full-scale sinopia drawing on July 25.) The huge files are being hosted by the Stanford Digital Library and, importantly, the grant will underwrite making the work publicly accessible. This imagery is not a substitute for the art work, but a fulfillment of our responsibility to future mural stewards. Recently, Art in American wrote, “ it is time once again to envision what art looks like as a public good.”

We are working with MagnaChrome to create a 6’ x 20’ hi-res, digital mural reproduction for the Culinary Dept.’s dining room. It will replace the fading, 23 year old photographic version, my first Diego Rivera related project. The advantage of the smaller reproduction is that it allows the viewer to see the entire work at once and the dualities Rivera encoded. This new reproduction will be the sole record of the mural on campus for the three years it is on display at SFMOMA. Technology has come so far; CHI is furnishing the 7.4 Gigapixel files. In 1998 our 250 MB file seemed colossal.

San Francisco Symphony Director Michael Tilson Thomas, retiring after 25 years, was feted with MTT25: An American Icon. He has been awarded Kennedy Center honors and numerous Grammy’s. Years ago, MTT’s staff graciously sent me a copy of a November 1935 postcard  George Gershwin sent from Mexico City. He had gone there in the wake of the poor Broadway reception for Porgy and Bess in October. The post card to his friend Mabel Schirmer in NYC said that Diego had given him a tour of the Palacio Nacional murals, “It was a grand experience.” (See postcard at May 15, 1940) The San Angel Inn on the postcard is where George stayed, across the street from Diego and Frida’s Casa/Estudios. In May 1940, movie star Paulette Goddard stayed at the Inn and helped Diego escape the police. The postcard “bounced around” but, like a homing pigeon, ended up in San Francisco with MTT, a huge Gershwin fan (hum along). This was the genesis of my play Rapsodia en Azul: An American in Mexico about a real party thrown for Gershwin and attended by Rivera, Kahlo, Siqueiros, Covarrubias, Noguchi, and more. (Kudos to Michael and Jean Strunsky’s Ira and Leonore Gershwin Trust and their archivist Michael Owen, a CCSF Library program alumnus, for help over the years.) PBS Great Performances at the Met will televise Porgy and Bess on July 17, 2020 at 9 p.m.

As we impatiently await the opening of the already installed Frida show at the DeYoung, Art in America reflects on new books by Celia Stahr (Frida in America) and the exhibition catalog by curators Circe Henestrosa and Gannit Ankori. Recently, the DeYoung hosted a webcast, “Frida Kahlo: Appearances Can Be Deceiving Digital Curator Discussion and Ex-Voto Drawing Workshop” in anticipation of the exhibit.

Proof-reading the next edition of the mural brochure is almost done. The presence of the “editorial team” is at my shoulder. Over a decade ago my late partners, Masha Zakheim, Robert L. Seward, Julia Bergman, and I agonized over every semicolon, phrase, and attribution as we edited the previous edition. In the past decade new revelations have added nuances to my understanding and, hopefully, the “team” would approve my revisions. CCSF art historian Dr. Nicole Oest, heir apparent to the mural stewardship, is shepherding the student project along. She and ESL instructor Jeffrey Goldthorpe have been adding to the website Curriculum page, as well. As more instruction goes on-line in response to the COVID quarantine, we want to make resources available to CCSF instructors and whomever else wants to integrate mural studies into their teaching. My dear friend Tina Martin, emeritus CCSF ESL instructor, sent me a link to her remembrances of the Diego Rivera Mural Project. Tina was instrumental in inculcating the mural into ESL curriculum. (N.B. Recently, it has been decided to name the new performance arts space and new home of the mural the Diego Rivera Theatre.)

Zoom meetings for the mural move continue. It occurs to me that all the colorful, exploratory stress-analysis graphical work done by the Graduate Mechanical Engineering Department at UNAM, (National Autonomous University of Mexico) would make a wonderful exhibition.

Every summer I do a mural presentation for DaVinci Camp students (6th-12th grades). They are exposed to Mathematics, Engineering, Science and Art. This summer it’ll have to be a  Zoom session with a PowerPoint presentation. UNAM’s Graduate Engineering Department head  Dr. Alejandro Ramirez is graciously letting me use their images as part of my presentation. Sadly, we still haven’t seen the full-scale mural panels they fabricated for testing purposes. As we are quarantined, I do get limited, but guilty pleasure at seeing Mexico virtually.