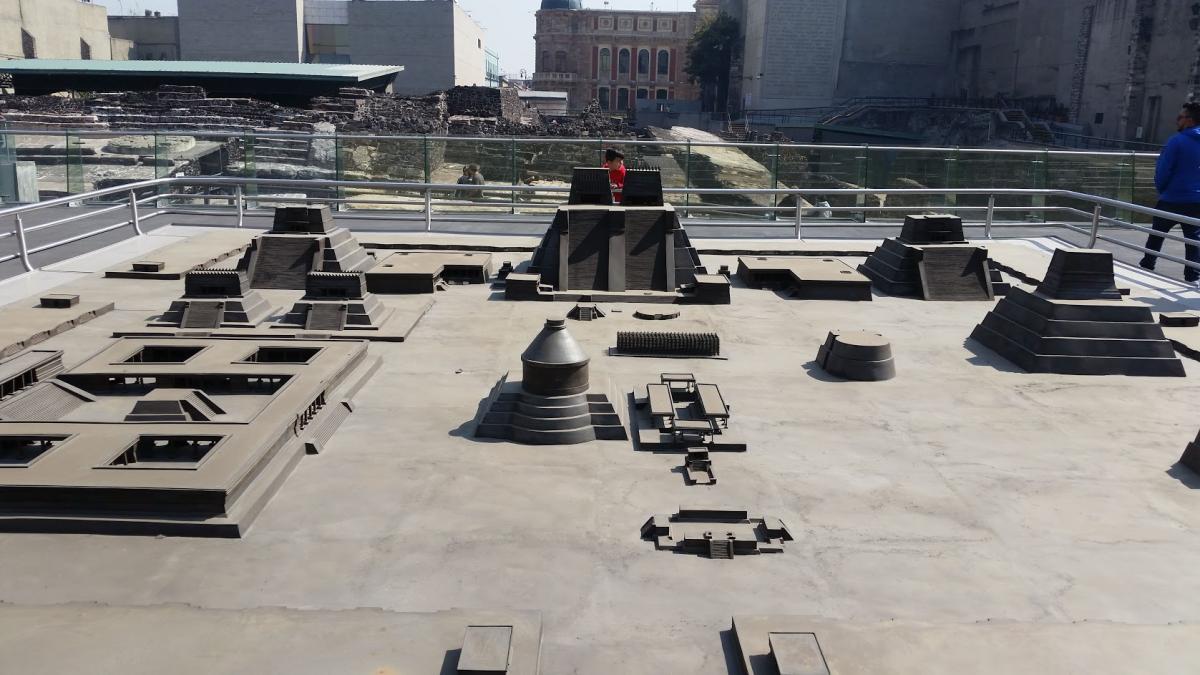 Model of the Templo Mayor at center of the Aztec capital, Tenochtitlan. Actual center just behind.

México City works its magic on you. Spells cast centuries ago emanate from ruptures in the street, where through glass windows you can see the base of a temple below…astride yet another temple (our mural website rests on 1998 work). The ancient, the Baroque, and the ultramodern shoulder each as if they were on the  metro at rush hour. Diego, Mexican dirt under his fingernails, compulsively collected the pre-Columbian past rooted in the earth. Yet, he also embraced Henry Ford’s machines, the vehicles which could propel México into the future. All the jostling took place in his head and then spilled out on to the wet fresco plaster (enlucido).

The Antiguo Colegio de San Ildefonso houses Diego Rivera’s first mural, The Creation  (an encaustic, not a fresco). On Friday, January 12, 2019, SFMOMA convened a Roundtable of thirty US and Mexican art practitioners to discuss how best to de-install and move our Rivera mural from City College to the museum. (Frida and Diego would have loved that women comprised half the Roundtable. Soon, hopefully, this won’t warrant comment.) Specific next steps were determined, which include modeling of the mural panels to ascertain their vibrational properties.

We had spent Thursday morning viewing Rivera murals at the Secretariat of Public Education and, then, at the Palacio de Bellas Artes viewed panel 4 of the Carnival of Mexico, which had previously traveled to France for a show. This steel-framed panel weighs about two tons. At the Museo Mural Diego Rivera, a diversity of sophisticated analytic techniques were used to determine the mural’s physical characteristics. We studied the supporting structure behind the mural, which had been moved adjacent to the Alameda in 1986 from across the street at the seismically-damaged Hotel del Prado. At the Museo National de Arte we got an insightful lecture on the spectral analysis  of the over 200 paints left behind in Diego’s studio. On a cross-town Uber ride to cocktails at an art-filled private home, a Mexican art conservator from Chiapas, who specialized in lime-plasters, taught me technical fresco terms in Spanish. The Mexico visit, partially underwritten by the Koret Foundation, was a model for collaboration between our two great countries, stewards of our communal cultural heritage.

The photo below by SFMOMA’s Ruth Berson refers to French artist JR’s Chronicles of San Francisco. This is an homage to Diego Rivera, who lived in France for many years. JR’s video mural opens at the museum on May 23, 2019, a year before we move the mural to the same Roberts Family Gallery, which is freely open to the public. Here is JR on TED. 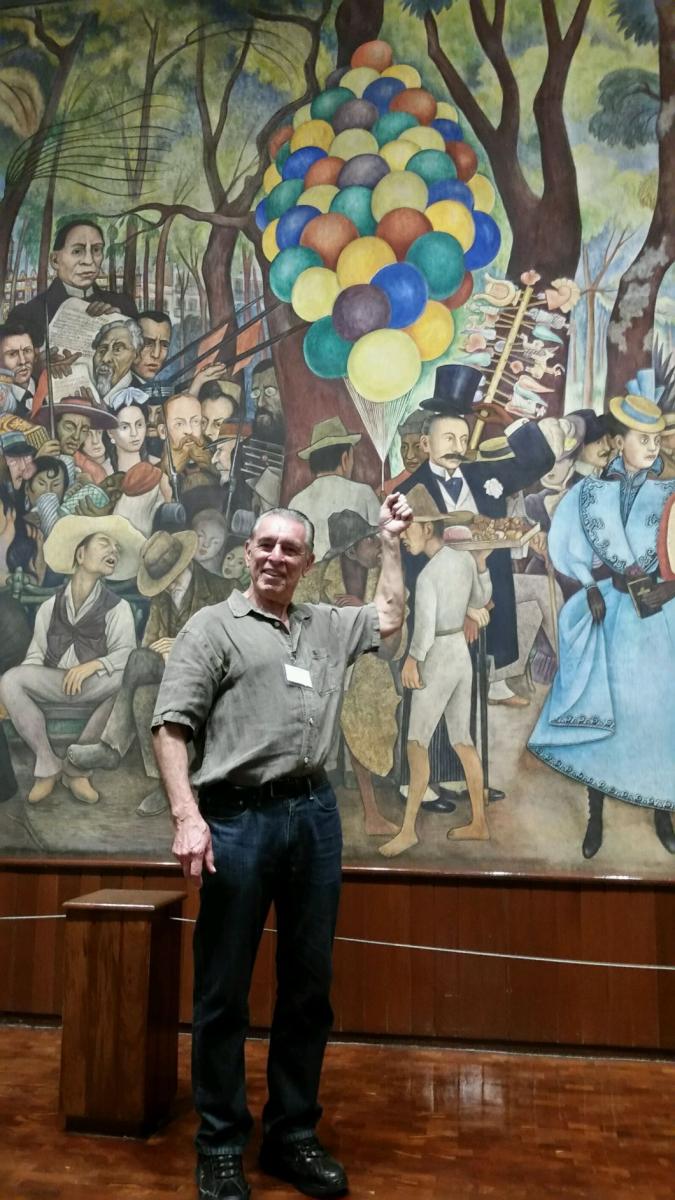 On January 9 I tossed back a salute to my late Rivera partner Julia Bergman, who, among other things, taught me how to drink tequila. She’s been gone two years. I toasted on the hotel rooftop, where we would analyze the day’s research, starting with our first trip in 1999. Looking over the ledge I could see work in the long-empty lot below, which has been recently discovered to be the site of an Aztec ball court. You feel like you are immersed in time. But, it could be the tequila. 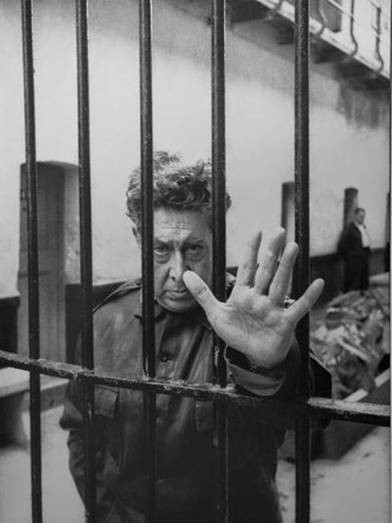 The Archivo General de la Nación is in a nicely remodeled penitentiary. This famous photo of Siqueiros behind bars was taken there. In his “honor” they restored a small cell block and display the photo. Archives are idiosyncratic and they pointed me elsewhere for 1930’s address directories and immigration records. Instead, using Cynthia Madigan’s memory of where their house (designated part of the national patrimony) was, I started walking down Paseo de la Reforma. The house that hosted George Gershwin in 1935 has survived between the high-rises that overgrew what was meant to be a grand European boulevard.

Though we have yet to find the exact date that Frida returned to Mexico in the 3rd week of May 1931 to start her affair with Nick Muray, at our Friday session I met a principle from Frida’s Casa Azul, who was much interested in the implications of my research and offered to help. A recent article noted that the immediate empathy between  Frida and Dorothea Lange may have had to do with both suffering from childhood polio. Importantly, Dorothea introduced Frida to Dr. Leo Eloesser, who would become her San Francisco confidante, as well as medical advisor. Imogen Cunningham’s son, Rondal Partridge, whose photo of Diego graced our December 2018 issue, started working in Lange’s darkroom when he was only 16 years old.

My Mexican friend, physicist Evelina Chiu, told me that the Dragon de Oro (the Golden Dragon) was the Chinese store where her mother used to wait on Frida. (Their family-owned company furnished the heavy equipment for the Alameda mural move.) Though I didn’t find the building, Avenida Madero is still home to the Hotel Ritz, where Tim Pflueger stayed in April 1940, while inviting Diego to paint at Art in Action  at the Golden Gate International Exposition’s (GGIE) second season.

The Treasure Island Museum will host a GGIE event Saturday, February 2, 1:00-4:00 PM, to celebrate the 80th anniversary of the opening.

The Mechanics Institute will host their GGIE event on Thursday, April 4, 2019 from 11:30-6:00 pm, with speakers (including me) about the fair. There will be an additional evening program. Details to follow in the next issue.

México City (CdMx) is awash in museums. I went to the Museo Jumex, Museo Soumaya (Carlos Slim’s place has a copy of Rodin’s Gates of Hell), to an extensive Graciela Iturbide show, and to the Museo National de Arte for Carlos Mérida and José María Velasco exhibitions. In Conversations with Diego Rivera, The Monster in his Labyrinth (page 42) Rivera relates that Velasco landscapes weren’t meant to be “photographic.” This finally explained why in Paris in 2014 I found that Diego had taken artistic license in his Le Port de la Tournelle painting; I couldn’t get Notre Dame, the pont, and the quay to align as in the painting.

An extraordinary Bellas Artes Kandinsky exhibition has an unstated Rivera connection. In his 1930-31 San Francisco sojourn, Rivera connected with Galka Scheyer, who represented Die Blaue Vier; Kandinsky, Klee, Feininger, and Jawlensky. This show warranted an extra visit, which I was unable to do.

On the last Sunday, I went back to the Museo Mural Diego Rivera for one last pass at Dream of a Sunday Afternoon in the Alameda Central. It was the cherry on top. Sr. Arturo Aguilar González hangs out at various Rivera murals and is a walking archive. In a large photo of Diego and Frida, he pointed out that she’s wearing Chinese slippers, probably from the Dragon de Oro. (In the museum’s gallery there was an exhibition on the 20th Century Chinese-Mexican connection, Vientos de Fusang, which included work by Miguel Covarrubias.) He pointed out Diego’s dead twin peeking out from behind José Guadalupe Posada and an isolated eye he claimed belonged to Nahui Olin. Using photos he unveiled subtle messages in the reconstructed “Rockefeller mural” at Bellas Artes. We spent an hour exchanging stories, though we didn’t always agree.

He repeated the refrain about Rivera disrespectfully “mooning’ viewers at the San Francisco Art Institute mural; an interpretation I’ve rejected for many years. The trompe l’oeil mural depicts Rivera as you might stumble upon him working. Bernard Zakheim had done a watercolor of Rivera in México seated on the scaffold. Lucienne Bloch, Diego’s assistant at Detroit and at the “Rockefeller” (where she took the mural photo which allowed its recreation), also did a print of Diego in this pose. If one buys into the “mooning” theory, the direct objects of Rivera’s disrespect would have been his friends depicted below him, patron William Gerstle, who hired him to paint the mural and offered him a teaching position, and architect Arthur Brown, Jr. (City Hall, SF Art Institute, and Coit Tower). Diego’s best advocate, architect Timothy Pflueger,  is not in the photo, but is the mural figure on the left. [The New Yorker has an article on “Wing”, photos by Patti Smith taken at the Casa Azul in 2012. They were on display at the SFAI in the Diego Rivera Gallery for a 5-day run.]

Rivera’s San Francisco murals are devoid of the overtly politicized images that characterized the “Rockefeller” mural or his Carnival of México series. So much was at stake for Diego in this first working foray north of the border. In San Francisco he was treated well and wrote as much to Pflueger in accepting his 1940 commission.  (After returning to México in 1941 he bitterly complained to Frida about how he was treated there, compared to San Francisco.) Here, Diego was on his best behavior (well, at least, on the scaffold). Sr. Aguilar González and I plan to hook up next time I’m in CdMx. Walking back to my hotel, I passed the lovers, rappers, strollers,  break-dancers, and clowns, who are today’s Sunday afternoon Alameda park denizens. Diego would have loved them and we can imagine such a mural.

Saying this trip was a dream come true would be imprecise; my most ambitious mural dreams were never this good. Thanks to my friends at SFMOMA for graciously including me.