In 1939, the first season of the Golden Gate International Exposition (GGIE) opened on Treasure Island in the middle of the San Francisco Bay. It provided thousands of visitors with new glimpses of the world; past, present and future. Thousands of cars drove over the newly opened San Francisco-Oakland Bay Bridge and parked on the flat man-made outskirts of Treasure Island. Fairgoers were treated to hundreds of exhibits from across the country and around the world. Though the first season was to last until Sept. 29, 1939, a cloud was cast over the fair as WWII in Europe commenced on Sept. 1. It was well into December 1939 before it was decided to have a second, albeit abbreviated, season.

One special exhibit of the second season, Art in Action (May 25 – September 29, 1940), was designed so that the public could watch artists in the process of creating their paintings, sculptures, and frescoes. It was the answer to replacing all the European art from the first season, which had been shipped home. Timothy Pflueger, a well-known San Francisco architect and one of the organizers of the fair, invited Diego Rivera to participate. Rivera was commissioned to paint a giant portable fresco to be later installed in a new library at  San Francisco Junior College (now called City College of San Francisco) of which Pflueger was the principle architect. 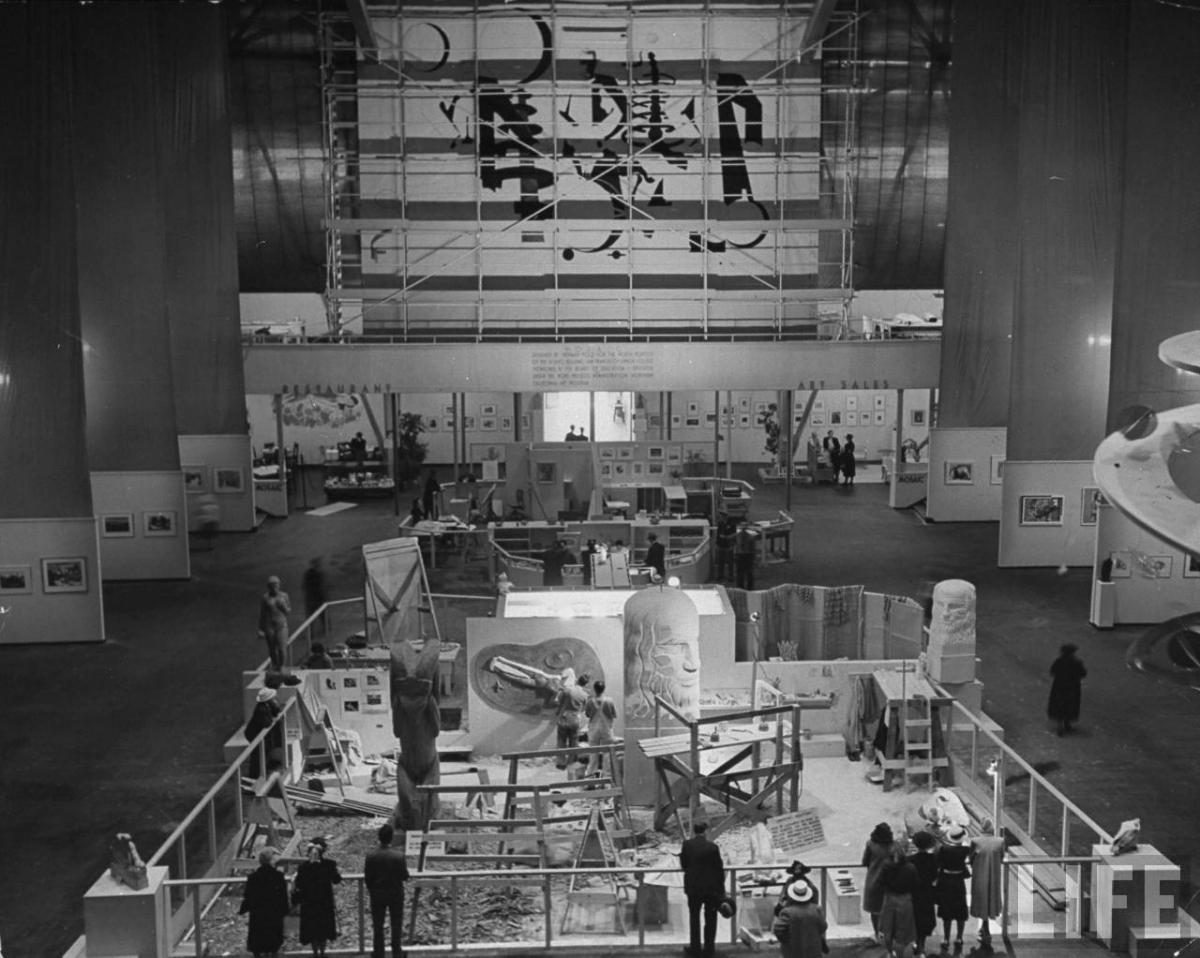 Art in Action as seen from the scaffolding for Rivera’s mural. Dudley Carter’s Ram and Fred Olmsted’s Bust of DaVinci are in the foreground. In the background is the scaffolding for Herman Volz’s Organic and Inorganic Science mosaic murals, which adorn the porticos of the City College Science Building. Rivera would daily climb that scaffolding to get the long view of his mural.

Rivera arrived in San Francisco in 1940, divorced from his second wife, artist Frida Kahlo, and moved into 42 Calhoun Street on Telegraph Hill. During the time Rivera was working on the Treasure Island fresco, Frida joined him in San Francisco and the couple remarried.

Work on the fresco began after the Rivera’s sketches for the mural were approved by the San Francisco Art Commission on July 25, 1940. The mural was not completed by the closing of the Exposition on September 29, 1940 because Rivera had offered to make it larger than his contractual obligation. Rivera and his assistants, Emmy Lou Packard, Mathew Barnes, and Arthur Niendorff, continued to work for two months after the Fair closed in the empty echoing exhibit space (which was really an airplane hangar) using only a waffle iron for heat.

November 29, 1940, the public was again invited to Treasure Island to view Rivera’s finished work. An estimated five thousand people privately previewed the mural. A public viewing of the mural was open on Sunday, December 2nd. An estimated 25-30,000 people crowded into the building to celebrate the masterpiece and to mourn the end of the Exposition. The fresco was then packed into ten crates and put into storage.

Pflueger died in 1946 and his library (on hold due to wartime shortages of steel and concrete) was never built. Rivera’s politics made him the frequent subject of controversy. That reputation in the climate of the post-war “Red Scare” kept the fresco in storage until after Rivera’s death in 1957.

The mural panels were initially stored on Treasure Island where one of them was partially damaged during a warehouse fire. For a brief period, there was a plan to store them at the de Young Museum, but the panels would have had to be lowered through a skylight with the use of a crane and the cost was prohibitive. They were eventually stored in a shed on the grounds of San Francisco Junior College.

In 1957, Timothy Pflueger’s brother, Milton went to the San Francisco Unified School District Board with a plan to install the Rivera mural in a City College building. His construction documents for a new Little Theater had been approved. Milton suggested that the Lobby be modified to accommodate the mural by bowing out the lobby wall. In 1961, the ten panels were finally lined up along a curve, welded together, and anchored into a supporting back wall. The current hope is to move the mural to a new venue on campus, where it can be seen from outside through a glass facade as Diego Rivera and Timothy Pflueger had planned.

View footage of the Art in Action Exhibition here.