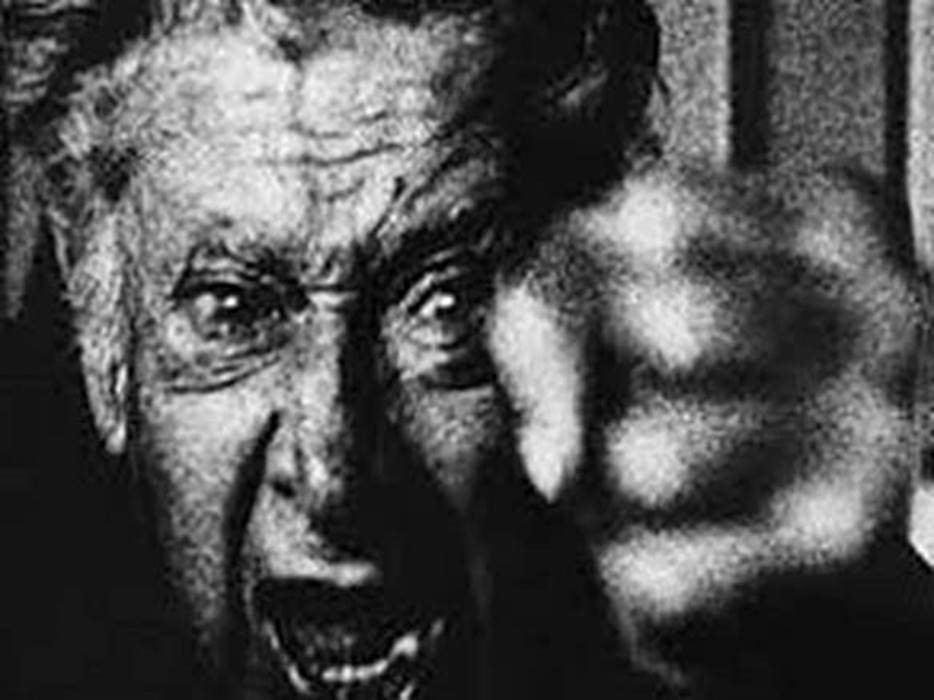 The Mexican muralists are getting off to a roaring start in 2020. As the 100th anniversary of the Mexican muralism program approaches, the Whitney Museum (NYC) unveils Vida Americana: Mexican Muralists Remake American Art, 1925–1945,  February 17 through May 17. Rivera, Siqueiros, and Orozco toppled a cultural border wall and artists north of the frontera gravitated to the energy radiating from a post-revolutionary México. The continent’s artistic poles had shifted. Locally, future Coit Tower muralists Ray Boynton, Ralph Stackpole (who had met Rivera in Paris in 1907), Bernard Zakheim, and Victor Arnautoff made the pilgrimage. From different places Elizabeth Catlett, Marion and Grace Greenwood, Isamu Noguchi and others headed south, often in creaky, leaky vehicles. (Thelma Johnson Streat, who briefly served as an assistant on Pan American Unity, is also represented in the show.)

The Throckmorton Gallery’s Mexican Murals, Identity and Revolution in Images kicked off the theme and is on view until February 29.

One hundred years ago, Diego Rivera was culminating his European gestation with an extended stay in Italy. To master buon fresco, Rivera studied Giotto, Tintoretto, Uccello, and others.  He imprinted the techniques, painterly and geometric, artistic and scientific, with which he would chronicle the history of México.

(Ely de Vescovi, aka Bettina Whitman, was descended from Tintoretto. She concocted the half butanol-half water solution, first used on our mural to extend the drying time of fresco plaster. Recently, our art conservators have found what may be a down-side to the use of this solution. In 1940 she was accepted as an original resident at the Montalvo Art Center, which cut short her tenure as an original assistant on Pan American Unity. In June Mona Hofmann wrote, “We were still living in a hotel [California]-Diego, Bettina and I-on separate floors-still compiling the materials and instruments to start that enormous project.” De Vescovi had worked with Mona in 1934 helping Rivera recreate the “Rockefeller mural” at Bellas Artes, soon after its NYC destruction.)

For those American artists not venturing south, Los Tres Grandes’ energy was delivered by their creative visits north. This influence was formalized by George Biddle’s request to FDR on May 9, 1933 to create a national program to emulate the Mexican program:

…..There is a matter which I have long considered and which some day might interest your administration. The Mexican artists have created the greatest national school of mural painting since the Italian Renaissance. Diego Rivera tells me that it was only possible because Obregon allowed artists to work at plumber’s wages in order to express on the Government’s buildings the social ideals of the Mexican Revolution.” (Full text, page 2 on AAA link and FDR’s reply.)

(Having seen MoMA’s 80th anniversary Rivera retrospective in the winter of 2011-12, I may wait until spring to go to the Whitney. Though I stayed at the Warwick Hotel, practically across the street from MoMA’s rear entrance, I had to wear everything I brought to jay-walk 54th street without freezing. The Vida Americana show moves to San Antonio in June)

But it wasn’t only artists who went to México. In November 1935 composer George Gershwin went south to look for the kind of musical inspiration he had previously found in Cuba. He didn’t find it, but budding painter Gershwin wrote, “…Spent a great deal of time with charming fat Diego Rivera & charming lovely Mrs. Diego Rivera. Made color pencil portraits of them both.” The polarity of Gershwin’s politics shifted.

(The Gershwin Trust has recently shared a photo of Gershwin sailing home on the SS Santa Paula and shared a copy of the passenger manifest. These are wonderful pushpins in the chronology. The manifest recorded that actor Frank Morgan, soon to be the Wizard of Oz, had boarded in Los Angeles with his wife. They are is in the photo. For those, like me, mired in the minutia; it was a two week trip through the Panama Canal from Mazatlan to NYC with stops. The cast of Porgy and Bess was waiting for Gershwin at the pier.)

Gershwin also met Siqueiros during the visit and helped underwrite the Mexican artist’s Experimental Workshop in New York in 1936. At this workshop Jackson Pollock was introduced to drip painting. Here is a picture of Siqueiros and Pollock.

A comparison of Siqueiros’ portrait of the iconic revolutionary Emiliano Zapata with Rivera’s portrait is very revealing. The darkness and lightness of the concurrent paintings could serve as a metaphor for the political differences that separated the two Mexican artists for a good portion of their lives. Rivera’s alignment with Leon Trotsky became an encumbrance after the ex-leader of the Red army was assassinated in México in 1940, while Rivera painted in San Francisco. Siqueiros had tried dramatically, but unsuccessfully, to machinegun Trotsky several months earlier. Later, when Rivera applied for re-admittance to the Stalinist Mexican communist party, he would disavow this relationship and claim he was really trying to set-up Trotsky by inviting him to asylum in México. In Yuri Slezkine’s House of Government there is a similar example with Konstantine Bulatkin conveniently claiming that he wasn’t really a follower of the tarnished Cossack Filipp Mironov, but only trying to “kill the traitor.” 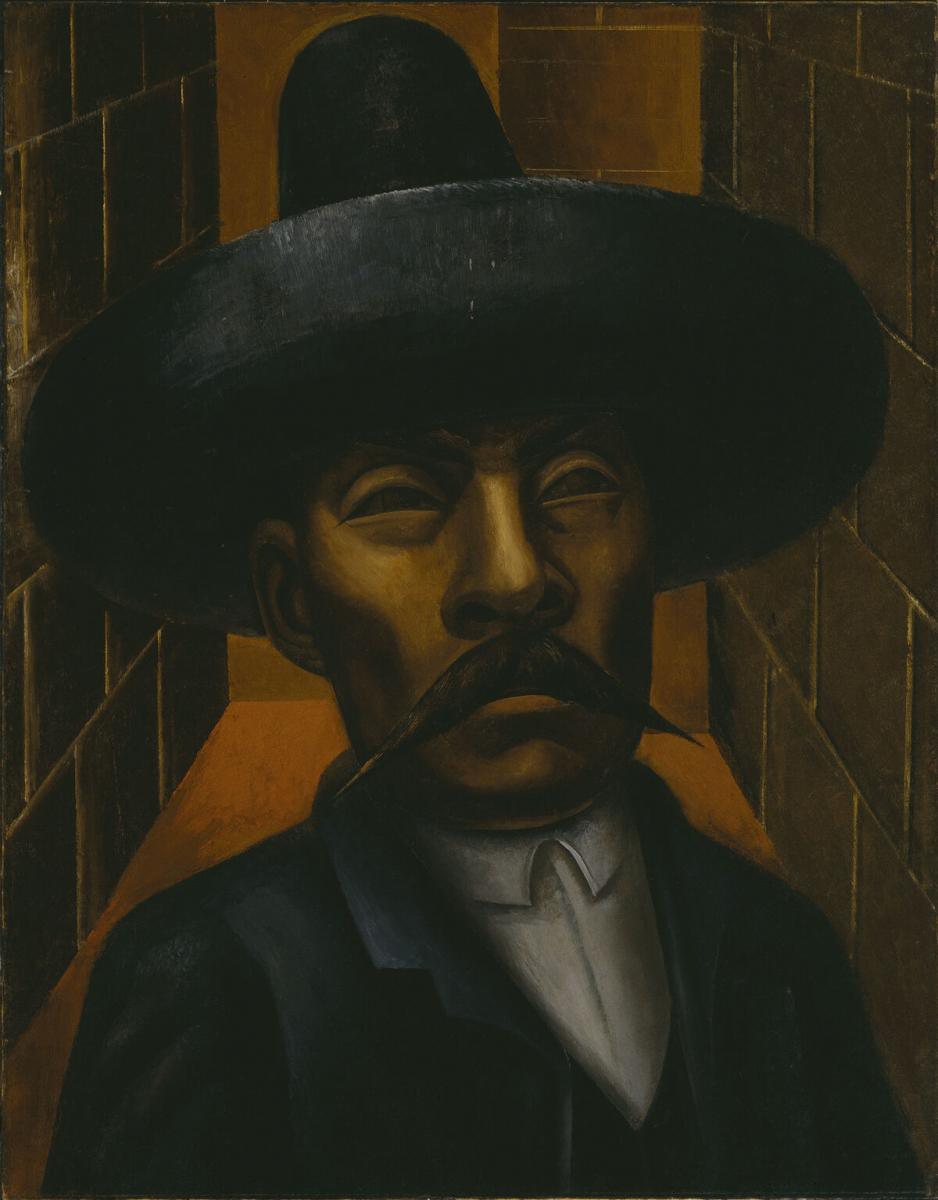 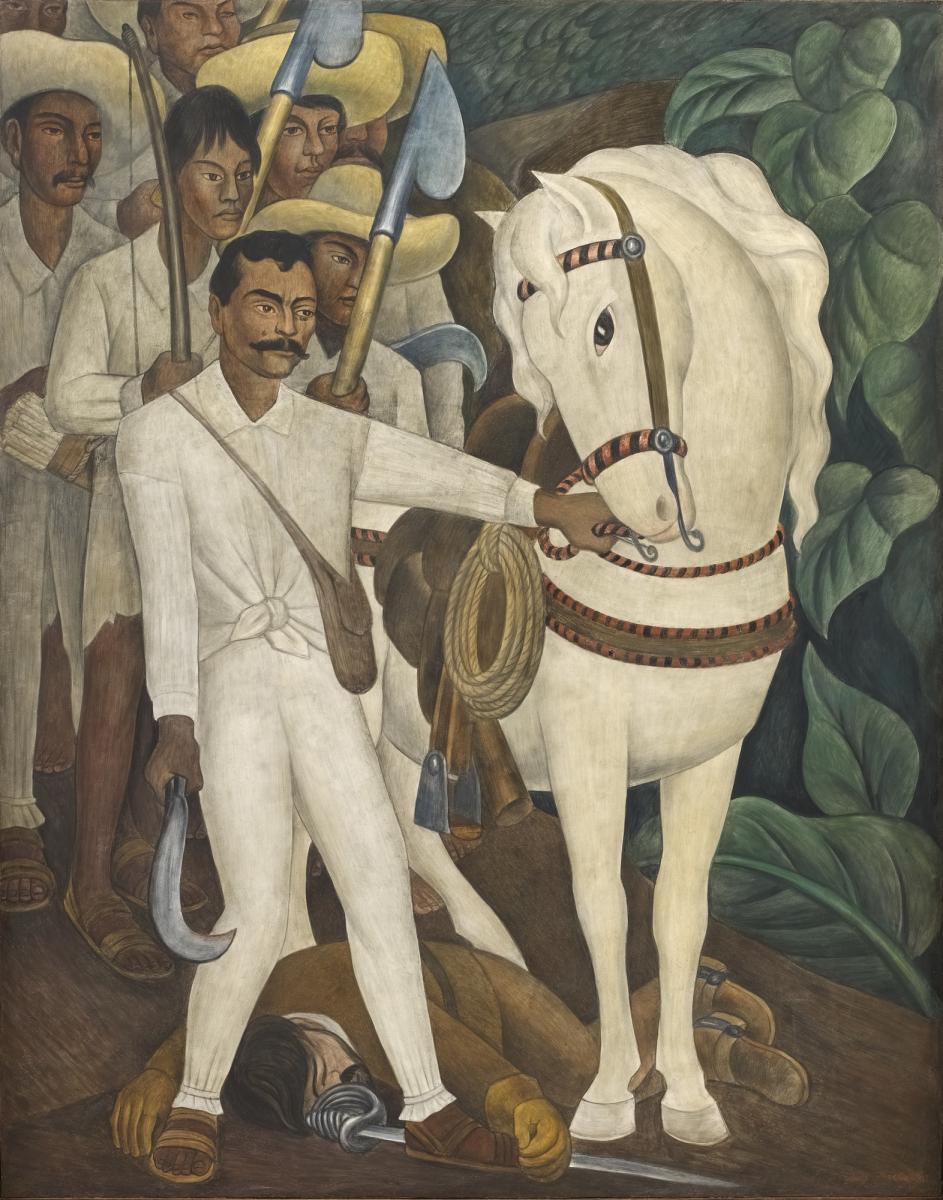 Recently, there was a meeting at City College of San Francisco with architects assembling the Criteria Document for a new Diego Rivera Theater, including the lobby installation of the mural, upon its 2023 return from SFMOMA. The architects are creating functional standards for viewing, lighting, security, and access to guide the architectural firms bidding on the project. This will probably be the mural’s home for the next 80 years, so the planning has to be prescient; we will be handing a pristine mural off to the future. Also addressed was a move of our library’s unique Diego Rivera Collection in proximity to the mural.

On a Saturday afternoon walk on Russian Hill, we stopped by to see the progress of the conservation work on the Olmsted murals at SFAI. The cleaning phase appears to be done. City College restored its Science Building’s Olmsted murals in 2002.

In January 1941 on his way home from San Francisco, he spent almost a month in Santa Barbara, but went to LA to attend a party at the home of actor Oscar Homolka. (Since Emmy Lou Packard said that they drove via the Pacific Coast Highway, I know the exact day Diego passed through my hometown of Oxnard. How’s that for minutia?) There was a lot of German exile filmmakers at the party, including Salka Viertel. Recently at the Mechanics Institute, Donna Rifkind spoke about her new book, Salka Viertel and Hitler’s Exiles in the Golden Age of Hollywood. Rifkind was a special guest at a screening of Queen Christina (1933), starring a luminous Greta Garbo and co-written by Garbo’s dearest friend Viertel.

The David Owsley Museum of Art (DOMA) at Ball State University will host Mexican Modernity: 20th-Century Paintings from the Zapanta Collection highlighting some of the most significant modern Mexican artists, from January 30 to May 3.

The Frida Kahlo, Diego Rivera, and Mexican Modernism from the Jacques and Natasha Gelman Collection is scheduled to run at the Musée national des beaux-arts du Québec, February 13 – May 18 and at the  Portland Art Museum, June 13 – September 27. It then moves on to the Denver Art Museum on October 25, 2020 and runs until January 17, 2021 (almost concurrently with SFMOMA’s Diego Rivera’s America.) The Gelman Collection was at SFMOMA in 1996 and has accumulated some frequent flyer miles over the years.

The DeYoung’s Frida Kahlo: Appearances Can Be Deceiving opens March 21. Curator Hillary Olcott will be giving a free lecture at the museum on February 27th at 10:30 am. An exhibit at the Cleve Carney Museum of Art in Chicago will highlight the works of Frida Kahlo in the summer of 2020. The list of recent or upcoming Frida shows is staggering. A sidebar to all the “official” Frida shows is the issue of the Frida Kahlo Corporation and the right of artists to include images of Frida in their works.

Went to an opening reception for sculptor Fernando Escartiz’s exhibit, México: Raiz y Fuerza / Mexico: Root and Strength. The event was co-sponsored by the Mexican Consulate in San Francisco and the Public Policy Institute of California. Escartiz’s version of the Mexican Tree of Life represents the relationship between Mexico and San Francisco and is a part of Consul General Remedios Gómez Arnau’s year-long series of exhibits celebrating “2020: Año de México en San Francisco”/ “2020: Mexico’s year in San Francisco.” You may have seen some of the artist’s work at the San Francisco Symphony’s last Dia de los Muertos concert.

Next month the SFMOMA/Atthowe/CCSF “mural move” team is off to México to confer with our UNAM (National Autonomous University of Mexico) team members. Mexican engineers have fabricated full-size, mural panel replicas, allowing us to quantify strategies to handle the real panels. The wonderful closure is that Mexican art conservation, chemical, engineering, and technological prowess is facilitating the move of a priceless mural, which celebrates U.S. technology. Diego’s dream for México has come true.

This coming May, the American Alliance of Museums and the International Council of Museums will be meeting in San Francisco. Both organizations have requested bus tours of the Diego Rivera murals. As it turns 80 years old, this will be a signature year for the Pan American Unity mural; finally getting the international attention it merits.

A heartfelt muchas gracias to my departed partners and to all you who have helped get the mural to this “tipping point”,