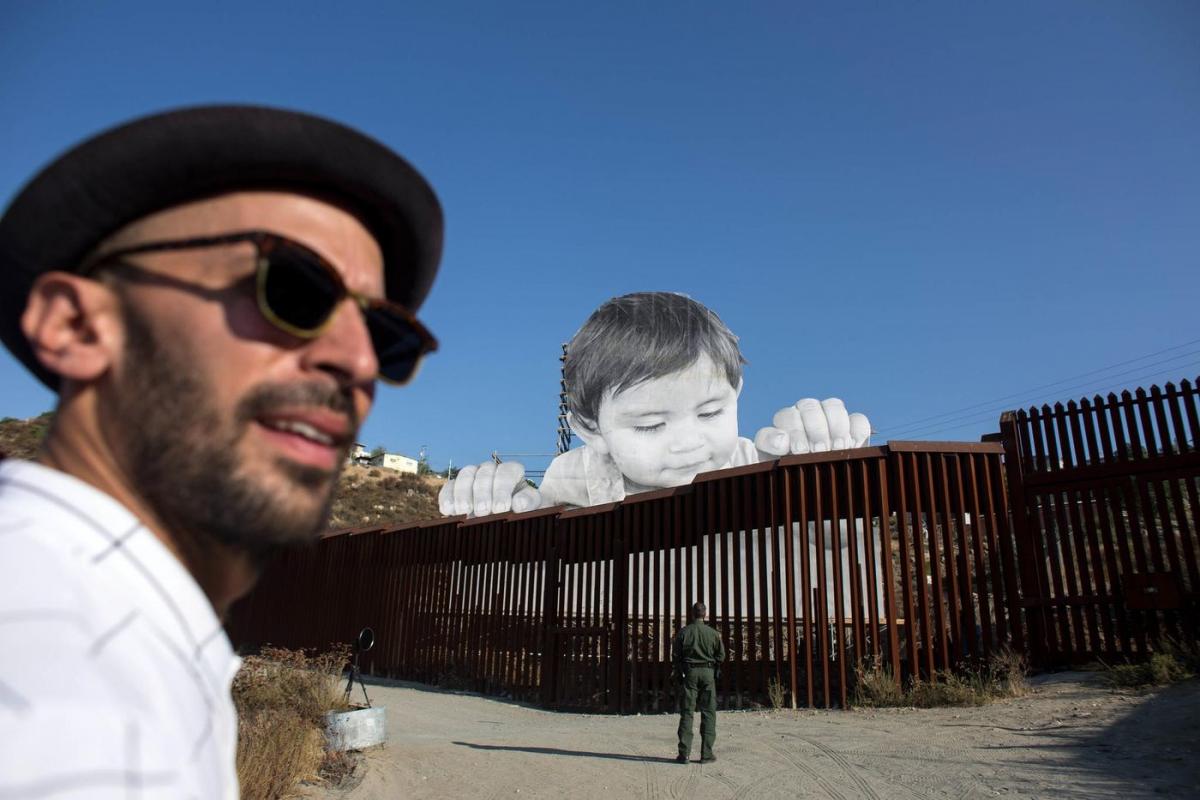 The last few weeks have been a great time for meeting visionary artists & activists.

“At the end of 2016, inspired by the murals of Diego Rivera, French artist JR decided to imagine how a whole neighborhood could be represented through art.” (From pamphlet for Les Bosquets 2017)

Recently at SFMOMA’s invitation, I did a tour of the City Club’s Allegory of California mural for JR. He and his crew are creating a San Francisco Mural to capture the whole city. He invited me to be photographed against a “green screen” at his studio with a colorful prop, a reference to one of my favorite Rivera murals. We chatted over chocolate cake and he elegantly autographed a copy of JR: Can Art Change the World? The book and JR have given me the same thrill I got in 2006 engaging with muralists at Dra. Guadalupe Rivera Marin’s International Mural Painting Encounter in México City. The celebratory work of artists from all over the world is life affirming.  As we work conserving and exhibiting our masterpiece, it is gratifying to believe in a future for murals. Maybe, art can change the world. One mural at a time. French director Agnès Varda and JR’s delightful, Oscar-nominated documentary Faces, Places is currently playing.

SFMOMA had previously requested a Pan American Unity mural tour for JR, but I was in LA. My longtime friends Angela (an actress, original Zoot Suit) and Rene (retired community college professor) put me up. Over several evenings, with eyes-closed, they listened to me read my play; giving me vital feedback.  We had a great time at LACMA’s Found in Translation show along with their friends, artists & activists Juan “Johnny D.” González and Irma Beserra Núñez. They are a living legacy of the East LA Chicano art movement, who are dedicated to public service. Juan had a 1970 graphic map of East L.A. murals in the LACMA exhibit. The UCLA Chicano Studies Research Center has recorded  27 hours of his oral history. At LACMA our Rivera mural was represented by four preliminary drawings (SFMOMA) and an iPad slideshow of mural images we had furnished. This is the second consecutive LACMA exhibit showcasing our mural.

Another Promised Land: Anita Brenner’s Mexico at the Skirball Cultural Center was exceptional. We were enthralled by the focused depiction of an era and the personalities who made it special. Curator Laura Mart said that, unfortunately, the show will not travel; so don’t miss it while it’s up until February 25th. She has shared a copy of a dated, 8-page letter of which I wasn’t aware from Frida to Anita; sent from San Francisco’s St. Luke’s Hospital. Another “push pin” for the chronology!

The museum generously let me park my car there past closing time, while my new friends Juan and Irma gave me a tour of some East LA murals. One of Juan’s pieces is the acknowledged first Chicano mural in East LA. The traffic is a subject unto itself.

On an historic January 3rd the CCSF team assembled with SFMOMA staff, art mover Scott Atthowe, and conservator Anne Rosenthal to take an initial joint look at how to move the mural. (Anne, Scott, and structural engineer Jim Guthrie comprised our 2011 mural assessment team.) The most important part of the coming 2020 project will be to cure the tag that the mural is little known.

Had a wonderful phone conversation with Cynthia Boissevain, who now lives in Wales. As pointed out last time, as an eleven year old in México City she heard George Gershwin play and sing all of Porgy and Bess at the 1935 party her mother threw for him, the subject of my play. Cynthia related that Frida was an amazing women, who didn’t let on about her pain. She said their Paseo de la Reforma home is still there because it is part of the national patrimony. Just what I needed; an excuse to go to CdMx.

Saw Gary Oldman’s Oscar-nominated performance as Churchill in “Darkest Hour.” The newly-appointed British prime minister is desperately trying to divert the momentum of the Nazi avalanche. The suspense is palpable as we wonder how anybody can slow the German juggernaut, let alone arrest it. Yet, now we know it happened. Historian Victor Davis Hanson in The Second World Wars: How the First Global Conflict Was Fought and Won makes a case that the Axis defeat could have been foretold. In late spring 1940 he would have been hard pressed to get bettors on that scenario.

Hedge-hopping towards San Francisco in early June, Rivera paced airport lounges reading about the Dunkirk evacuation to save the surrounded British army in France. With Paulette Goddard’s help he was fleeing Stalinist assassins. Diego stippled our mural with the tension everyone felt awaiting the Nazi’s seemingly inevitable victory. Rivera loved the movies and the old movie weekly serials always ended in a cliffhanger.

Another classic example of the vagaries of history is George Gershwin’s fateful November 1935 trip to México, arriving bruised by the poor Broadway reception for Porgy and Bess. (He never lived to see his vindication.) The time spent socializing with Diego and Frida (he took color photos of them) radicalized his politics and affected the budding painter in him. This eerily evocative self-portrait was done upon his return to NYC. 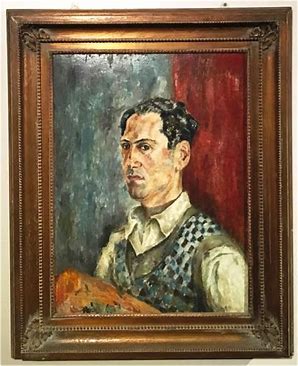 Infatuated with Paulette Goddard in Hollywood in early 1937, Gershwin encouraged her to go to México to get her portrait painted by his friend Diego. (If the disillusioned Gershwin had not forsaken NYC for Hollywood, he might have had immediate treatment for the belatedly diagnosed brain tumor, which killed him suddenly in July. How much more exquisite music would we have had?)

When Paulette finally arrived in 1940, Diego was divorced from Frida, but slated to marry his model Nieves Orozco. In an 2006 interview, Nieves told me that the amorous Rivera burned his bridges when Paulette showed up. If Porgy and Bess had opened to good reviews, Rivera might have married Nieves and never remarried Frida. Would Frida be as famous today? Or would she be just a “footnote”; another of Diego’s wives, like painters Angelina Beloff and Marevna?  Like Chaos Theory, it demonstrates the outrageous ramifications of just a slight change in how the cosmos plays its cards. Michael Chabon’s The Yiddish Policeman’s Union posits just such an alternate reality; history’s zag, instead of zig.

Prior to their 1940 remarriage, Frida had only two solo shows. The first was the 1938 Julien Levy Gallery show in NYC (Per Hayden Herrera’s Frida, “Julien Levy wrote me a letter saying that someone had talked to him about my painting…” Might it have been Gershwin, Julien Levy’s friend?) The botched 1939 Andre Breton brokered show in Paris was salvaged by Marcel Duchamp and Mary Reynolds, but was not widely known. Might Frida have become like artists Leonora Carrington and Remedios Varo; very much admired, but not international icons?