Q: When and where did Diego and Frida remarry?

Q: How long did it take to finish the mural?

A: Diego arrived June 5, 1940. The charcoal drawing on the plaster substrate was unveiled on July 25, 1940.
The first invitational showing was about four months later on November 29, 1940.
(The Fair closed September 29, 1940 and Rivera and his crew worked in the cold hanger, the Palace of Fine Arts, for two months.)

Q: How did Paulette Goddard end up in the mural?

A: In 1937 George Gershwin suggested she go to Mexico to get her portrait painted by his friend Diego Rivera. It wasn’t until 1940 when she was in Mexico City on a publicity tour for Look magazine that she met Rivera just before he was due to come to the GGIE. This connection led to the use of images from “The Great Dictator” in which she starred with her husband Charlie Chaplin.

Q: What is the significance of the name “PETER” on Goddard’s necklace?

A: This was her nickname for herself, which she had on her dressing room. Paulette collected jewelry and helped popularize charm bracelets.

Q: What are some of the metaphors in the mural?

A: The mural “bridges” the cultures on this continent. The mural is a physical metaphor for the Golden Gate Bridge. It is made up of 5 horizontal modules and, vertically, the ratio of the two mural panels is the same as the ratio of the bridge tower above and below the roadbed. There is an undercurrent of Masonic images in the mural as well.

Q: What did Rivera think of Pan Americanism?

A: Rivera was a fervent believer in the concept of the unity of the Americans. This idea is a thread that runs through his writings and speeches from the late 1920’s up until his death in 1957. Our mural is the embodiment of this belief.

Q: How is the mural mounted?

A: The mural (22’ 1.5” high x 73’ 9” long) is made up of rigid steel frames which support the plaster, which was spread over a steel lath (screen). The five upper 14’9” square panels weigh just under three tons each*. The five lower 7’4.5” x 14’9” panels weigh just over one and a half tons each*. To ensure the safety of the mural panels, they were reinforced with “panel mounts” on the back side. These stiffened the panels, moved the center of mass rearward from the mural surface, and provided a means to easily engage them with a rack.

*The “panels mounts” almost doubled the weight of all the panels.

Q: Are any of the characters in the mural still alive?

Q: What are some of the subtle comments by Rivera?

A: The gentleman sitting at the table looking up at the diver is wearing a Wendell Willkie button. Wendell Willkie ran against FDR in the Nov. 1940 Presidential Election. Willkie was an internationalist and in later years would write a book, One World. These sentiments might have appealed to Rivera; they certainly did to Charlie Chaplin (My Father, Charlie Chaplin, p.264).

Q: Where did Diego Rivera and Frida Kahlo live during their visits to San Francisco?

A: He painted the White House portrait of President Monroe before much wider fame as an inventor in the 1840’s.

Q: Who is Samuel Morse? 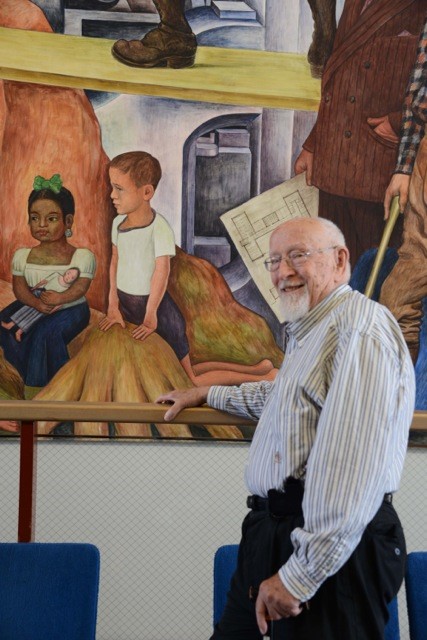