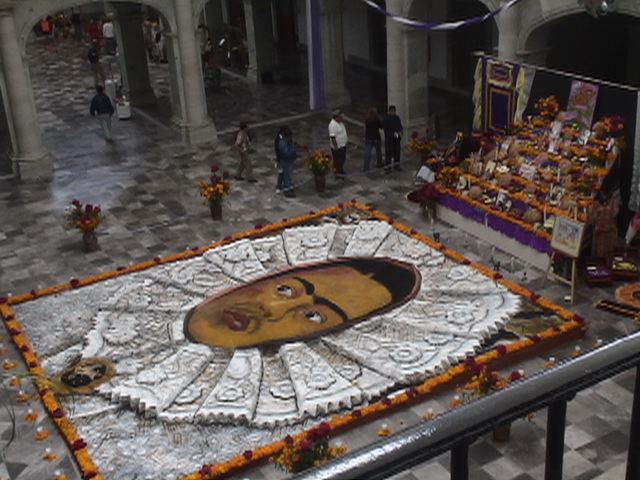 On this Day of the Dead, we hope for some saving grace in these troubled times. It helps to fondly remember past partners on this project like Julia Bergman, Masha Zakheim, Bob Seward, Sal DeGuarda, and Tannis Reinhertz. In 1999 my late wife Carmelita Alvarez went to the San Francisco Public Library to read all of the 1940 SF Chronicle and SF Examiner newspapers on microfiche. She created abstracts for our research. More of my friends and family are on the “threshold”, pausing for a momentary Mexican good-bye, increasingly difficult with the quarantine. Right now, Gabriel Garcia Marquez might write Life in the Time of COVID. Certainly, the Diego Rivera Mural Project is on the cusp of a change, the end of a chapter, as the mural transitions to SFMOMA for a few years.

There is some exciting news coming from Philadelphia about composer-in-residence Gabriela Lena Frank. El Ultimo Sueño de Frida  y Diego (The Last Dream of Frida and Diego) is a Spanish-language opera about Frida Kahlo and Diego Rivera she is writing in collaboration with Pulitzer Prize-winning playwright Nilo Cruz. It is scheduled for fall 2021 at the San Diego Opera. She lives and runs a music school up north in Boonville, Mendocino County.

She is also working with Mural Arts. In 2006 Diego’s daughter Dra. Guadalupe Rivera Marin and Mural Arts convened an Encuentro Internacional de Pintura Mural in Mexico City.  The meeting of so many muralists from all over the world was surely a highlight of Julia’s and my Rivera work. Some of us reconvened in Philadelphia in early 2007 to celebrate Doctora Rivera, see a Mexican graphics show at the Philadelphia Art Museum, and enjoy some new murals. (A belated Feliz Cumpleaños to Dra. Rivera on her 96th birthday, October 23.)

The DeYoung’s Frida Kahlo: Appearances Can Be Deceiving finally opened and it was a special treat to see it on opening day with my friend Adriana Williams. To augment my mural timeline, I’ve just gotten permission from the Museo Frida Kahlo to obtain copies of three documents displayed in the show. We’re hoping to get access to their archives in the future to get critical documentation for my theory on how Frida and photographer Nick Muray initially hooked up. Having a plausible/likely scenario still requires the rigor of hard data, which is difficult to find when a couple is initiating a clandestine affair. Their instantaneous affinity likely surprised them both.

The confluence of the Frida show opening and the SF Public Library’s  VIVA! Latino Hispanic Heritage Month hosted by Anissa Malady resulted in several YouTube videos, including author Celia Stahr talking about her Frida in America book. The new Frida film is now out and can be streamed through the Roxie Theater. My YouTube video is here.

Frida Kahlo, Diego Rivera, and Mexican Modernism at the Denver Art Museum has opened. This is a version of the Gelman collection of Mexican Modernists, but as usually happens, traveling exhibits are augmented locally. Denver collectors John and Sandy Fox lent works by Leonora Carrington and Remedios Varo. In San Francisco, the DeYoung was able to borrow Frida’s wedding portrait from SFMOMA and Portrait of Dr. Eloesser from Zuckerberg General Hospital. The three documents in the DeYoung’s exhibit have a San Francisco angle and were borrowed from the Museo Frida Kahlo by DeYoung curator Hillary Olcott.

The  NYT did a fascinating article about Albrecht Durer, Seeing Our Own Reflection in the Birth of the Self-Portrait. Another intriguing article on portraiture involves studies done of the Mona Lisa (which some believe is a Leonardo self-portrait). In this new investigation about DaVinci’s work, it suggests that the artist “copied” an image onto the canvas using pouncing, the technique used in fresco painting to transfer the drawn image on to the wet plaster. 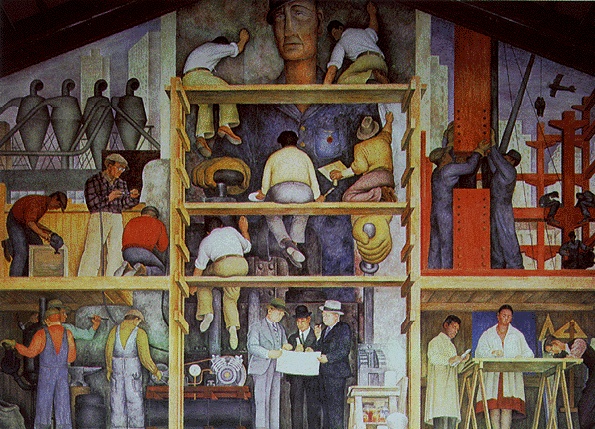 In doing research on Diego Rivera’s Making of a Mural; Showing the Building of a City at the San Francisco Art Institute, I came across copies of a Rivera article in my pile of Emmy Lou Packard papers. However, there was  a page missing. Luckily, I was able to find a hard copy of The Hesperian, Spring 1931 issue for sale on-line. Rivera’s article is titled “Scaffolding” and is a dialogue between various versions of himself and an architect. The tromp l’oeil scaffolding in that mural is metaphoric and refers to construction on many levels.  Though Rivera was enamored of US technology, that passion first manifested itself in his devotion to architecture. In the dialogue the Architect states: “You have always said, ‘the architect is painter, sculptor, and engineer welded into one personality, and that painting, sculpture, and architecture are together one thing: plastic art.’” In the lower part of the mural Rivera placed architect Timothy Pflueger and architect Arthur Brown, Jr. (City Hall, Coit Tower, and the SFAI) on either side of his SFAI patron, William Gerstle. In his inaugural speech in San Francisco at the San Francisco Art Institute on Dec. 13, 1930 Rivera stated, “skyscrapers are the peak of American art…and now the painter will follow the architect.” He exhorted the audience to learn to love steel.

There is also an article by SFAI instructor Albert Barrows on Dynamic Symmetry. Barrows, the figure in the mural’s lower right, huddled over the table, explains about the mural’s mathematical underpinnings, which he helped Rivera develop. Barrows makes an analogy with the mathematical underpinnings of music, which rather than constrain creativity, enables it. In 1985 to aid in Emmy Lou Packard’s research, Lucienne Bloch reconstructed the Albert Barrows’ guidelines. Recent work has applied mathematical analysis to a large number of masterworks.

Our friends at Cultural Heritage Imaging are helping maintain the world’s connection to the past; Recovering Traditional Weaving Knowledge: Te Rā, The Māori Sail. In January 2020 Carla Schroer and Mark Mudge of CHI traveled to the British Museum in London to document the only existing Māori canoe sail of its kind, made over 200 years ago. The imaging work was performed in collaboration with the New Zealand project entitled Te Rā — The Māori Sail Whakaarahia anō te rā kaihau! – Raise up again billowing sail! — funded by The Royal Society – Te Apārangi Marsden Fund. The New Zealand team produced a 13½-minute video of the project.

Lastly, here’s a Zen moment from the Isamu Noguchi Museum, which nurtures creativity in the name of an artist, who has passed, but who had a significant connection with Frida and George Gershwin.