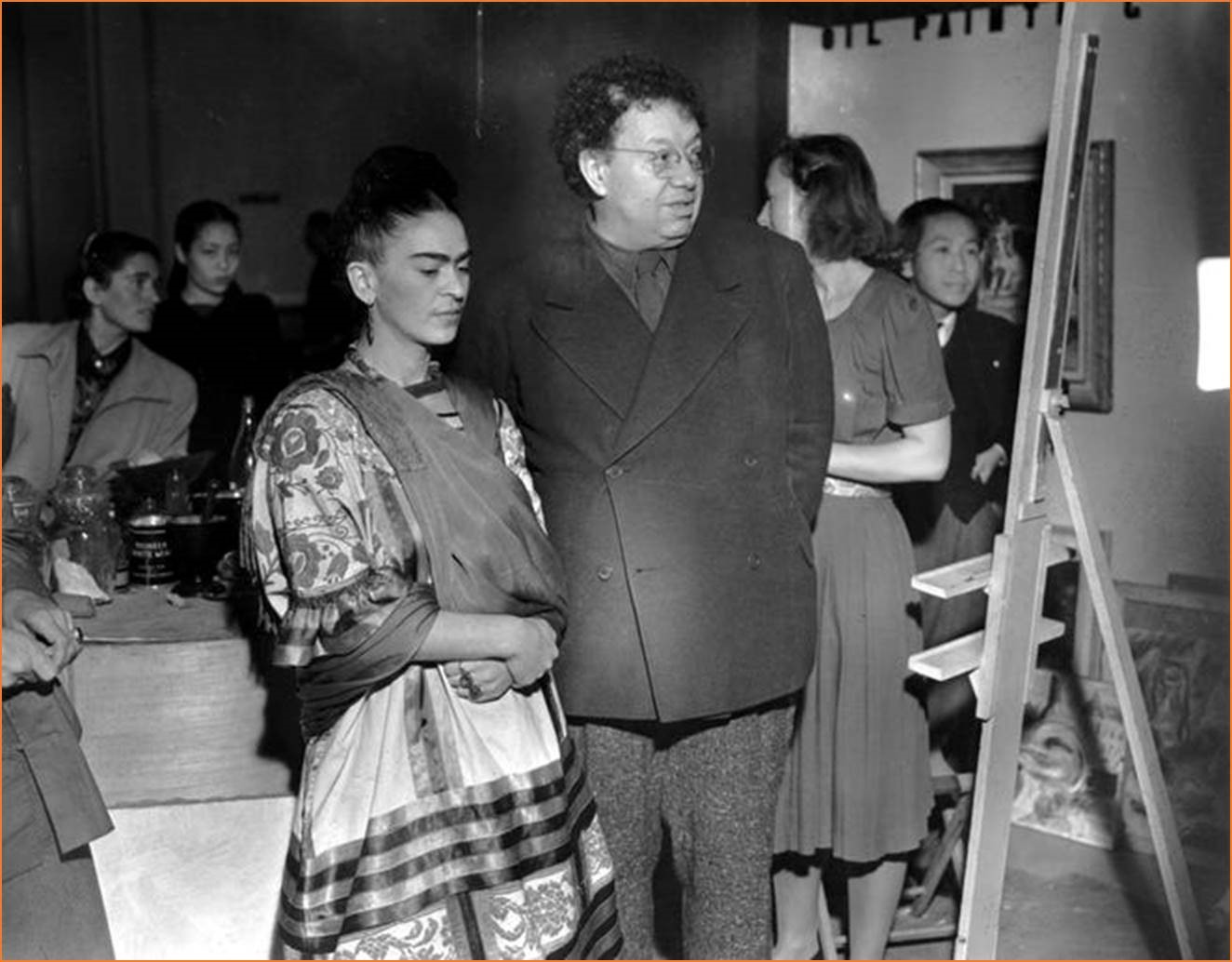 On Diego’s 54th birthday, December 8, 1940, he and Frida remarried in San Francisco’s City Hall, ending a year of being divorced.

After applying for a license on December 5, they had crossed Van Ness Avenue to take in the San Francisco Museum of Art’s (SFMA is now SFMOMA) Art in Action exhibit. It was an extension of the eponymous show at the recently closed Golden Gate International Exposition (GGIE), where Diego had painted his mural.  In June-July the SFMA had hosted Picasso’s Guernica, which was on a fund-raising drive for Spanish Civil War relief.  Diego had undoubtedly seen it and that is the main reason I feel there is a reference to Picasso’s work in lower Panel 4. (In early 1939 in Paris, Picasso had given Frida the “dangling hand” earrings, which she wears in her mural image.)

Around early September a shaken Frida came to San Francisco in the wake of the assassination of Leon Trotsky. She and her sister Cristina had been arrested as possibly complicit. Trotsky had lived in their family home, the Casa Azul, but, incriminatingly, the sisters had unwittingly invited the assassin Ramon Mercader over for lunch. Since Frida was divorced from Diego and her father was German, the police decided she wasn’t even a Mexican. She was stateless for several days but was hastily naturalized a Mexican citizen August 26 and the same day applied for a US visa. The visa application was displayed in the recent Frida show, Appearances Can Be Deceiving, at the DeYoung.

The next iteration of their marriage would be different. Dr. Leo Eloesser, Frida’s physician, who had checked her into St. Luke’s Hospital, brokered the pre-nuptial’s: they would share household costs, Frida would acknowledge that Diego would never be monogamous, and importantly, they would not have conjugal relationships. This last item seemed like a sentiment that might be suspect. But on a 2016 trip to Canada with my late Rivera partner Julia Bergman (who happily shared a December 8th birthday with Diego), we perused a private cache of raw notes for Diego’s “autobiography” My Art, My Life. Diego confirmed that he and Frida never had conjugal relations in the last 14 years of her life. Since it wasn’t part of their deal, after 1940 neither of them could be “unfaithful”.

But the main indication that Diego and Frida’s relationship had passed a threshold was that after being released from St. Luke’s, prior to the second marriage, Frida had a brief affair in NYC with Heinz Berggruen, Diego’s translator and chauffeur at the GGIE.  Diego was on top of his game painting our mural according to Mona Hofmann, who had worked with him recreating the “Rockefeller’ mural at Bellas Artes in 1934. After Frida’s unanticipated appearance, Diego may have “brokered” her assignation to facilitate completing his half-finished mural. He introduced the married Heinz, who was no longer employed by the closed GGIE, to Frida at St. Luke’s Hospital. Heinz, an émigré from Germany in 1936, had married well to Lillian Zellerbach and had previously worked at the SFMA. It would seem, Frida’s fidelity was no longer an issue with Diego.

However, Frida had long ago seen the writing on the wall about Diego’s fidelity and had embraced her almost decade-long relationship with photographer Nick Muray in latter May 1931, when she hadn’t yet been married to Diego two years and while Rivera was finishing his mural at the San Francisco Art Institute. Paint on her famous wedding portrait, dated April 1931, might not yet have been fully dry. What might have Frida been thinking as she painted? How might this inform the extensive analysis of the painting’s imagery? It might be difficult to be dreamingly in love, when your eyes are wide-open. As far as I know, with the notable exception of Isamu Noguchi, Frida’s lovers up to 1940 were mostly married (Muray, Trotsky, Levy, Berggruen).

Last issue’s mention of artist Marion Greenwood culminated in a fortuitous connection with Joanne Mulcahy, the author of an upcoming biography. This led to sharing of the 1936 film footage of Marion and Diego, which a mural “friend” had recently showed me. Last time, I posed a question about whether Isamu Noguchi and Marion, former lovers, knew about the other’s affair with Frida and Diego. Joanne wrote me that Isamu and Marion were “tight” and probably shared secrets. If this was a soap opera, all the coincidences might seem too implausible. Meanwhile, all the parties were creating art. Multitasking is not new.

Since Frida and Diego’s relationship was so complex, I’ve long used a scientific metaphor to illustrate their behavior and the efficacy of their pact. (Too often, Frida is depicted as Diego’s “victim”, which takes away her volition and disempowers her.) Diego and Frida can be imagined as binary stars coupled by a profound gravity, which compels them to revolve around each other as they trace their trajectory through the cosmos. Their attraction is equal and opposite. Demonstrably, the forces binding them were stronger than the forces trying to separate them. Astronomer Isabel Hawkins put a cherry on top of the metaphor with a clever pun. She told me, “But, of course, Diego is the “Red giant.”’ 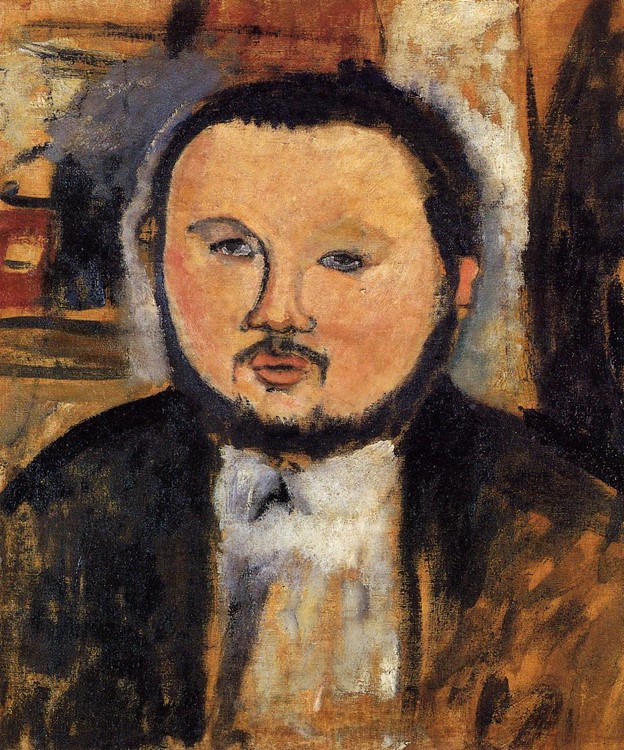 In honor of Diego’s birthday, here is the Amedeo Modigliani portrait of Diego at 28 years of age.

One of the greatest aspects of SFMOMA’s siting of the mural is how low it is, one foot off the floor. As we witnessed, if it had been raised literally an inch higher, it would not have fit in the Roberts Family Gallery. The mural-move team had thought of everything. In my September FOD newsletter, the cover photo is of a young person getting a great view of the mural. Now the Uffizi Museum has lowered some famous art pieces to let the kids get a better look. The fact that the Pan American Unity mural was never installed 14’ high, as originally designed, has been a benefit of the proposed CCSF grand library never being built. If it had been built, I believe that both Timothy Pflueger and Diego Rivera would have been mortified by what they had done to the artwork. The mural is now 81 years old, this past November 29th, and we’ve finally got it sorted out about how to display this masterpiece. Architects who will build the mural’s new CCSF home, recently examined the exemplary museum presentation. SFMOMA saved them a lot of work.

La Nuit des Idees is a world-wide event. On Thursday, January 27, 2022, I’ll be in SFMOMA’s booth at the Night of Ideas “(Re)building together” (at the new KQED studios) with former CCSF docent Vickie Simms to answer questions about the mural. Details to follow.

The issue of historical depiction is influencing the future of murals like the Victor Arnautoff murals at Washington High School. Historical filmmaker Ken Burns has made a very important and eloquent clarification: Being American means reckoning with our violent history.

In celebration of Diego’s 135th birthday, his dream Anahuacalli Museum has reached a milestone with the completion of the surrounding complex.

Frida’s Diego y Yo has set a new price record for a Latin American work of art at a sale at Sotheby’s. However, it is still the murals that comprise the place closest to my heart. Happily, murals in Hawaii by Jean Charlot will be saved and donated to the people of the state.

As we continue to document the mural, one item still requires analysis. The 1-1/4” metal angle which forms the perimeter dam for the fresco plaster is of unknown composition. We know it is non-ferrous because it doesn’t attract a magnet. Was a special alloy used to ensure it didn’t react with the lime-rich fresco plaster? The tools available to analyze paintings keep proliferating and many had already been used in our mural work. The proposed technique to be used in México on a sample of the angle will likely be x-ray spectrophotometry. Every bit of information we can glean is our gift to future stewards of the mural.