At the Diego Rivera Theatre in late May, a convocation of world-class conservators, curators, engineers, architects, and art movers gleaned new insights into the mural’s condition and installation. In late July further work involved removing an exterior decorative stone panel to expose the structural wall to which the mural is attached. Conservator Kiernan Graves (“our mural whisperer”) again came for the day from L.A. to lay her hands on the mural to detect excessive vibrations. The resonant frequencies of the mural panels is a question. (In a nice bit of closure, Kiernan’s mentor was conservator Francesca Piqué, author of the first 1999 Getty Conservation Institute mural report.)  Soon, some of us from CCSF, SFMOMA and Atthowe Fine Arts Services had our latex-gloved hands on the mural feeling the vibrations as the outside crew sawed and chiseled through the exterior panel. (Atthowe’s Scott, Bryan, and Esteban installed our 14-ton Olmec head in 2004.) Once portions of the 12” thick structural wall were exposed, Bryan drilled holes to allow a borescope to peek and film behind the mural.

All the information will inform Atthowe’s strategy for relocating the mural to SFMOMA for their late 2020 Rivera’s America exhibition. In addition we have started conferring with City College Performing Arts and Education Center (PAEC) architects, who are modifying the lobby design to accommodate the mural upon its return.

In May one surprise to UNAM historian/conservator Sandra Zetina Ocaña and to Kiernan Graves was a bit of graffiti. Frankly, I couldn’t see it until Cultural Heritage Imaging’s Carla Schroer helped with a hi-res sample of our photogrammetry shoot (shown above). In lower Panel 2 where Diego depicts himself painting a fresco, subtly scratched in pencil to the left of his brush tip is,

At first, I thought that Diego’s solidarity was surprising. The Stalinist David Alfaro Siqueiros and the Trotskyist Rivera had a conflicted, pistol-packing relationship over the direction of the Mexican communist party. On May 24, 1940 Mexican artist Siqueiros led the assault on Leon Trotsky’s fortified house by 20 inept submachine gun toting assassins dressed as police. Only Trotsky’s grandson was slightly injured. Rivera, both a potential target and, initially, an official suspect, prudently went into hiding. Divorced from Frida, he was covertly aided by movie star Paulette Goddard, Charlie Chaplin’s estranged wife, who was in town to get her portrait painted. Overestimating his “chances” with Paulette, Diego burned other local, amorous bridges. Paulette and Diego flew out of Mexico on June 4, headed to California for a splashy, flashbulb arrival at the Burbank Airport.

Four months later on October 4, Siqueiros was arrested at his hideout. 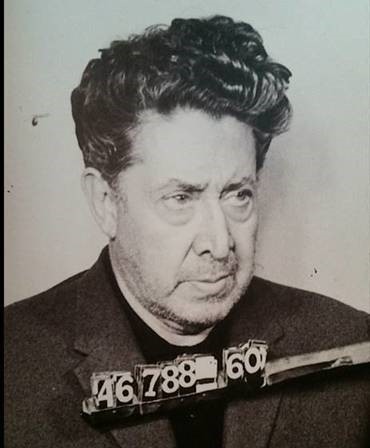 I had believed that the graffiti was likely written soon after. Later released, Siqueiros left México before anyone had a change of heart. (Leon Trotsky had been attacked by Stalin’s “Plan B,”  Ramón Mercader, on August 20 and died the following day.)

Flying this scenario past Sandra Zetina, the Mexican scholar also sensed that the solidarity was surprising. She thought, instead, that the graffiti might refer to an international campaign for Siqueiros’ release after a 1960 arrest. (He was released in 1964.) On August 9, 1961, the first anniversary of his arrest,  a NY Times ad, paid for by artists, called for Siqueiros’ freedom. The only problem with this scenario was that Diego died in 1957.

Belatedly comparing writing samples, it seemed to me that the graffiti handwriting didn’t match Diego’s. But, if not, who would have the chutzpah to write on Diego’s masterpiece? If the graffiti appeared after the mural was installed in the theater in mid-January 1961, the list of suspects became smaller.

In 1941 while the mural was initially in storage at Treasure Island, a fireman accidently punctured the crate holding Panel 5 with an axe during a fire. In the summer of 1962 Emmy Lou Packard was hired by City College to repair the damaged part of the mural. She had access and the opportunity to possibly scratch the graffiti.

In 1954 Rivera had been finally re-admitted to the Stalinist Partido Communista Mexicano (PCM), which had booted him out in 1929. A recent Weekly Standard article addressed Frida’s obsession with Stalin. Emmy Lou in a 1979 AAA interview disavowed her anti-Stalinist dalliance, citing a rationale that only Stalin could have defeated Hitler. It seems that after WWII, Stalin was the only game in town for the Left. Did Emmy Lou express her solidarity and Rivera’s in absentia? Hopefully, more information will surface to resolve the issue.

Conversely, George Orwell’s Homage to Catalonia is about his disillusionment with communism after participating in the Spanish Civil War in 1937 as part of the anti-Stalinist POUM, the Workers’ Party of Marxist Unification. Orwell noted that you needed a scorecard to keep track of all the leftist Republican players, who governed Spain as an uneasy coalition.  Moscow used the war to brutally purge the Republican side of non-Stalinists, despite it undeniably helping the fascist Franco to victory. Siqueiros served in this war, honing his anti-Trotskyist agenda; while Trotsky, fleeing Stalin, got his fatal asylum in México in 1937 through Diego Rivera’s intercession.

I want to let you know that the entire collection of materials for Rivera in America are now housed at the Washington University Film Archives in St. Louis, and are available to researchers.  They include the source tapes that I shot of interviews with Raquel Tibol, Lucienne Bloch, Steven Dimitroff, Ella Wolfe, Emmy Lou Packard, Pele DeLappe, Peter Stackpole, the doorman at the Stock Exchange Club, Michael Goodman, Jose Alfaro and Paul Von Blum. There are also dupes of all the footage of Rivera Painting in Detroit.  Also Included are my production papers including partial interviews and the Paramount story on Frida welcoming Trotsky to Mexico.

Working with Stanford’s Digital Libraries, Cultural Heritage Imaging gave me a peek at the huge photogrammetry file for Panel 5, which Stanford is currently hosting. The resolution of the not yet public image is extraordinary. Using the Digital Elevation Map (DEM) feature, I have already been able to see the outlines of the work done by Emmy Lou Packard in 1962.  (Per Carla: the DEM is “a false color way of showing the 3D surface topology in a 2D image.  It is derived from the 3D data, specifically from the 3D point cloud.”) An important future project will be to map the now visible outlines of each jig-saw puzzle shaped giornata, a single day’s painting work on the fresco’s wet plaster.

We are looking forward to the cutting-edge discussion about intellectual property rights, access to the images, storage in perpetuity, and all the issues surrounding this unique cache of information. This work will be useless if the files cannot be safely passed forward to future generations.

[Note: Funding for the photogrammetry shoot has been paid for entirely by donations to the Foundation of City College of San Francisco’s Diego Rivera account (disclaimer: I am the signatory). Thank you, Mural Angels, for your gifts to the future!]

When Dra. Guadalupe Rivera Marin, Diego’s daughter, was in town for a Father’s Day conversation at the Brava Theater, I gave her a framed print of a photo of Diego, her sister Ruth, and her taken by George Gershwin in November 1935 (courtesy of the Ira and Leonore Gershwin Trust). She and I plan to meet next time I’m in México. These Gershwin pictures will be publicly available through the Library of Congress, once the Trust’s assets are catalogued.

Artist Wayne Healy was in town for the ongoing (until September 16)  California Historical Society’s exhibition ¡Murales Rebeldes! about L.A. murals that were lost or destroyed. He and curator Jessica Hough came by to visit the mural. Diego Rivera believed in the reconciliation of Art & Science and often said he would have been an architect, if not an artist. Diego would have loved Wayne. In addition to being a prolific muralist, he is an aerospace engineer. We talked Bernoulli’s Principle over lunch and were later interviewed by Univision.

In the Living New Deal’s latest newsletter, there is an article about a WPA mural that was recently painted over. The issue of the stewardship of public art is ongoing. The artists who painted the murals in the “Mission” district can no longer afford to live here. The Living New Deal is co-sponsoring a conference “Women and the Spirit of the New Deal” on October 5-6, 2018 in Berkeley.

John Charlot, son of artist Jean Charlot, Diego and Frida’s good friend, contacted me recently. Jean had been featured in the Anita Brenner show at the Skirball. Linda Downs, past director of the Detroit Institute of Arts, hooked us up.

Matria is a documentary film by Fernando Llanos, about his grandfather Antolin Jimenez, a revolutionary, politician, Mason, and businessman, who in 1942 tried to muster an army of Mexican charros (horsemen) to fight against the Nazis, should they attack México. The film describes Nazi influence in a México, which eventually sided with the Allies. This is the world Diego Rivera wrote about in early 1940 in the tabloid Hoy, just prior to coming to San Francisco.

Our June San Francisco History Association talk had almost 300 attendees, a surprise to the hosts and to me. Swapping stories with other investigators was a real treat.

Being at the mural is never boring: a visiting Canadian family told me they have a friend who is the grandson of a former Canadian ambassador to Mexico. This friend has an autographed drawing of Diego’s penis, which the Mexican artist sketched for the Ambassador. They’ll try to send me a photo and the details of what must be an interesting story.

Had a great scare lately when my laptop hard drive crashed. Having been remiss in regularly backing up my Rivera research, the consequences might have been catastrophic. John at SF Computer Repair saved the data. Please, remember to back-up your work!