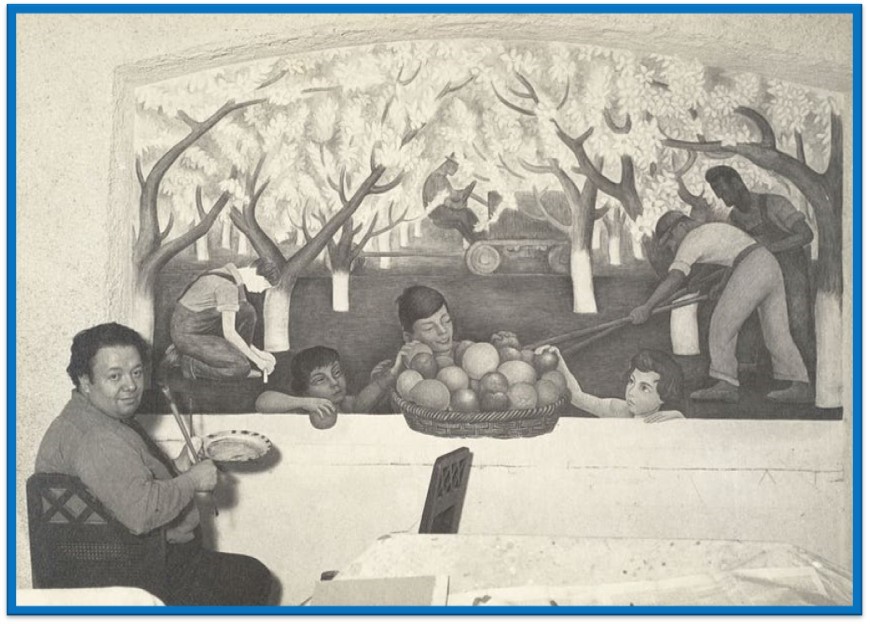 Diego Rivera’s America is coming to SFMOMA on July 16, 2022 and will continue through the end of the year. Got a sneak peek at the Still Life and Blossoming Almond Trees fresco, which is on loan from UC Berkeley and has already come in for some conservation TLC. Looking forward to seeing more of the 150 pieces by Rivera, many seldom seen, which will comprise the show. Many out-of-town visitors to the Pan American Unity mural are already making plans to return for this show. The exhibition, guest curated by James Oles with Maria Castro, SFMOMA Assistant Curator, will continue on to Crystal Bridges Museum of Art next year. (The SFMOMA Conservation Department also has responsibilities maintaining the Nature x Humanity: Oxman Architects exhibit. Some pieces are evocative of something Georgia O’Keefe might be doing if she were still alive.)

Just as an artist might position adjacent complementary colors to create a visual scintillation at their margin, Diego juxtaposed scenes from Charlie Chaplin’s film The Great Dictator about antisemitism, next to images of notorious anti-Semites Thomas Edison and Henry Ford to create a mental dissonance at the margin. “Henry Ford’s history of mass producing hate is a cautionary tale for today.” George Gershwin experienced it first-hand. Similarly, at the margin of a Marxist ideal, there are the horrors that transpired in Stalin’s Soviet Union, “between the idea and the reality…falls the shadow”.  The incongruity between the two scenarios created a shadowy “border” region. Having supported Trotsky, no saint himself, what mental gymnastics did Diego and Frida have to perform to psychologically cross this border and become Stalinists? The issue is an insight into the Mexican artists and into those times; to many it was the Soviets who won WWII. They crushed Germany on the anvil of Mother Russia at a final cost of over 20,000,000 Russians dead, the heaviest losses by far of any country involved in the war.

Spent an afternoon out on the streets and at the mural with the BBC Two crew in town filming a three-part Frida and Diego documentary. The Scottish crew of Louise, Emi, and Becky had Mexican cameraman Alex fill out the team. They had been to NYC, Detroit, northern California, and were on their way to México. At a preparatory Zoom meeting I had been impressed with the scope and the insights of the story they were telling. The documentary will come out (at the earliest) late this year or early next year. To add to the mural’s exposure, we did an interview with Radio France and later this month will do a Zoom talk for an art history class at the Universidad de la Salle Oaxaca. This is the international exposure the mural has always deserved.

My friends from the Living New Deal, Harvey Smith and Susan Ives, came to see the WPA exhibit at SFMOMA. While chatting with them at the mural, I mentioned that Nieves Orozco, Diego’s model and in 1940 briefly in line to be the next Mrs. Diego Rivera, had hosted Marilyn Monroe in México in February 1962, the year that the movie star died. By then Nieves was married to Frederick Vanderbilt Field, the richest communist in the US, though they lived half the time in México. Ten years ago this episode came to light when the FBI re-issued Monroe’s less heavily redacted FBI files. Well, Harvey did some sleuthing and came up with Marilyn’s family connection to México. It turned out her mother was born in México, a fact movie moguls were not interested in promoting. Through Nieves, there were only two degrees of separation between Marilyn Monroe and Diego! (He, however, was a big Mae West fan.) Alarmingly, Marilyn was romantically attracted to Frederick, which distressed Nieves, who had previously lost Diego when movie star Paulette Goddard had turned up on the scene. As Frida would have said, “¡&#@*! those Hollywood movie stars…” But Diego not marrying Nieves left him available when Frida showed up in San Francisco after Trotsky was assassinated. After she had a brief fling with Heinz Berggruen, Frida and Diego re-married in City Hall. Some people have their honeymoon before they get married. Nieves is the famous Nude with Calla Lilies (1944), part of this summer’s show. In a 2006 interview with Julia Bergman and me, Nieves told us she posed with her back to the viewer because she was pregnant. As I mentioned last time, it’s a good research strategy to have smart friends.

In perusing the Frederick Vanderbilt Field FBI files, an interesting anecdote came up. Artist Elizabeth Catlett Mora is quoted in a December 1961 report as being upset with Angelica Siqueiros for not using the money she’s been given to try harder to get her husband David Alfaro Siqueiros and his pals out of a Mexican jail for “agitating”. When the conservation work was being done on the mural in 2018, prior to the move to SFMOMA, etched graffiti, Libertad para Siqueiros!, was found on lower panel 2. After conferring with the art conservators, we suspected Emmy Lou Packard scratched it while doing conservation work after the mural was first installed at CCSF in 1961. Many artists had taken out an ad in the NYT on August 9, 1961, to get the Mexican government to free Siqueiros. Since they had embraced Stalinism in their later years, the deceased Diego and Frida would now have been on Siqueiros’ side. Perhaps, Emmy Lou was standing up for all of them, who had become “True Believers” and had publicly recanted their backsliding Trotskyist ways. (I had the great honor to give Ms. Catlett and her husband, Mexican artist Francisco Mora, a mural tour in 2000. They invited me and my wife to the Legion of Honor for a ceremony to accept Catlett’s sculpture Stepping Out, a donation by Johnnie Cochran.)

The “Degrees of Separation” phenomenon on this Rivera project manifests itself even geographically. Just a short block down Natoma from SFMOMA is the Ira and Leonore Gershwin Trust, the source of invaluable information for the Gershwin angle in our story (It was George who sent Paulette Goddard to see Diego in México and who went shopping with Frida, who also modeled for him). In the mural we can see Pflueger’s 140 New Montgomery “Pacific Telephone & Telegraph” building and looking out the SFMOMA window, there it is, a glimmering tower less than half a block away. Tim Pflueger lived all his life in a house at 1015 Guerrero, just around the corner from me and just blocks from St. Luke’s Hospital where Dr. Eloesser checked-in Frida in September 1940. (Here is the latest on Pflueger’s Castro Theater.) The winner, though, is the George Gershwin postcard, which was sent from Mexico City to New York in November 1935. When I first heard about it, it was in Houston, but the owner told me she had given the postcard away. She had gifted it to conductor Michael Tilson Thomas in San Francisco. The postcard was just two miles away and MTT’s staff made a copy for me in 2008, 73 years after it was mailed. 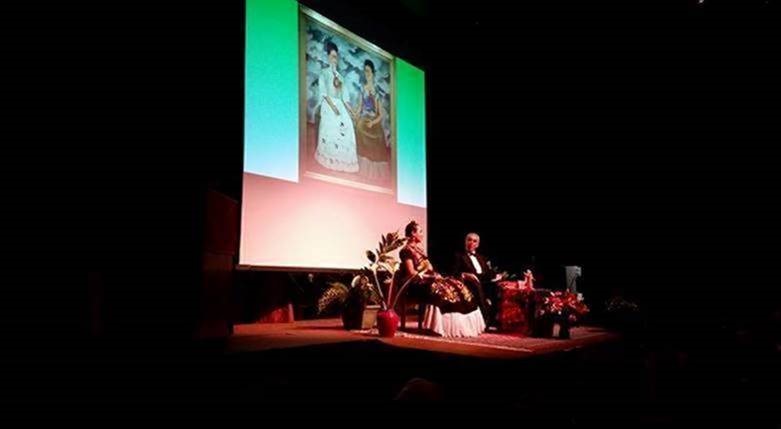 Jean Franco, “Frida,” has tentatively booked us to do a presentation of our one-act Interview with Frida at SFMOMA in December and, perhaps, two added performances at another venue. There are EIGHT Immersive Frida shows running in the US. The Frida opera is being performed in San Jose later this month. (One exception with their ad is that the Northern California premiere actually occurred at City College in the early 1990’s. Still have the somewhat shredded show t-shirt.) Frida Kahlo, Diego Rivera, and Mexican Modernism from the Jacques and Natasha Gelman Collection is currently running at the Portland Art Museum.

The topic of how art is displayed is something that comes up frequently with the mural’s ideal setting at SFMOMA. Recently, while looking at the mural, a guest brought up an analogy. Seeing the mural in person is similar to the difference between actually visiting the Grand Canyon with its infinite colors and lighting as opposed to just seeing a photo of the landmark. People are stunned by the scope of the mural and the varying colors, depending upon the time of day and the weather. The mural is purposely low hanging fruit. Very young people and people in wheelchairs can appreciate it close-up. The mural has never been so accessible. Though I often quote art conservator Francesca Pique’s admonition, “Think of taking care of the mural for the next two hundred years,” recently a Minoan fresco has been dated to 1550-1450 BC. That makes the Pompeii frescoes, recently shown at  the Legion of Honor, effectively youngsters at merely 2000 years old.

Diego Rivera’s Hoy article in early 1940 addressed the issue of why Stalin had invaded Finland. The Soviet Union needed a buffer because Peter the Great had positioned the capital too far west. However, Stalin’s trouble in subjugating Finland, which was adept at winter fighting, may have emboldened Hitler to launch Operation Barbarossa, the invasion of the USSR, in June 1941, six months after the mural was completed. Now, totalitarian leader Stalin became our ally, “Uncle Joe.” The U.S. Lend-Lease program, which helped supply armaments to our new ally the USSR, is now being proposed for the Ukraine to use against the Russians. (Reflecting on its history, nonaligned Finland is now seriously considering joining NATO given the Russian’s actions in the Ukraine.) After WWII, some people wondered when the USSR would reimburse us for the Lend-Lease. These people were naive as to the nature of the “deal” FDR had brokered on behalf of our country.

In other examples of the concept of “historic DNA,” Hitler was ceded the Sudetenland to “rescue” ethnic Germans in September 1938. Then he decided to take all of Czechoslovakia. In 2014 Putin “rescued” Russian separatists in the Donbas region of the Ukraine. Now he wants to take over the whole country.

Papers seized after Berlin fell in 1945 show that from the fall of France in June through August 1940, the Nazis were trying to affect the US presidential election, (NYT article, August 1, 1957).

All that’s old is new again.